On November 1st, Nick and Claudia Simonis of San Antonio set up holiday decorations on the front lawn of their home. They definitely dig the holidays and decorated the exterior of their home with an inflatable snowman, some reindeer, and a Santa hanging from a helicopter, reported WOAI. Claudia was eight months pregnant was hoping to get the hard-to-put-up stuff out of the way considering she wouldn’t be able to help out soon.

But a of couple days later on November 4th, the family received a letter from Diamond Association Management & Consulting (DAMC) homeowners’ association that said: 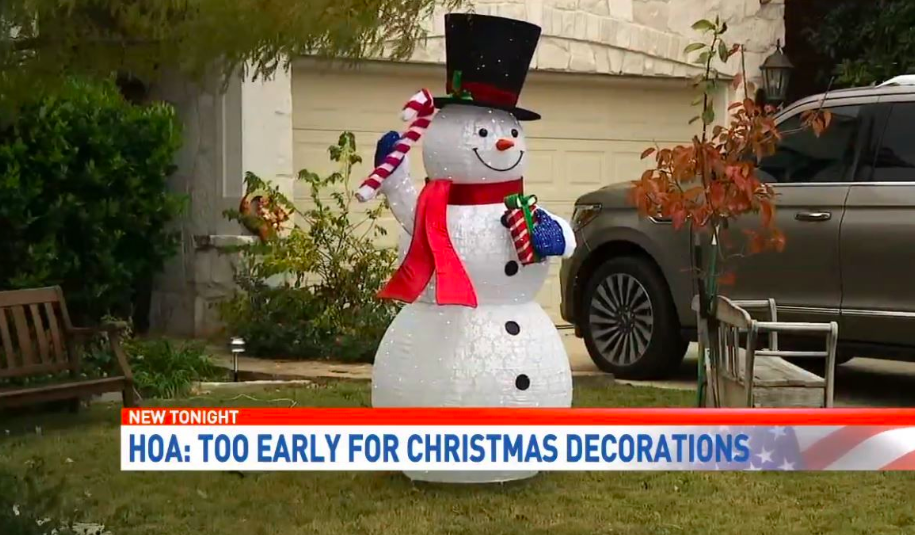 “Maintenance – Holiday Decorations Need To Be Removed,” and under inspector’s notes, it specifically stated, “please remove the snowman until closer to the holiday season.”

What’s even worse (and weirder) is that the letter never specified when they would be allowed to put their decorations back up.

Their neighbors weren’t the only ones upset with the Gringes. Charles Minton, who has some decoration on his lawn said, “We always abide by the rules and regulations. So, when we see it in black and white, there’s no problem. But if it’s not in black and white. Who’s to say what’s what?”

The couple’s decorations are still up, while the homeowners’ association has not responded to WOIA‘s request for comment.