In the 19th century, the graveyard was a place of both danger and comfort. Loved ones lost too soon were visited regularly and yet grave robbers sought out fresh corpses to sell to medical schools. Wrapped up in all these mixed emotions was the specter of accidentally being buried alive. A shocking number of people supposedly underwent this horrific fate in the 1800s, but without modern medical devices and heart monitors, how could anyone really tell when a loved one had passed on? While medical science wouldn’t find solutions to these problems right away, the very technical field of coffin production perhaps could. 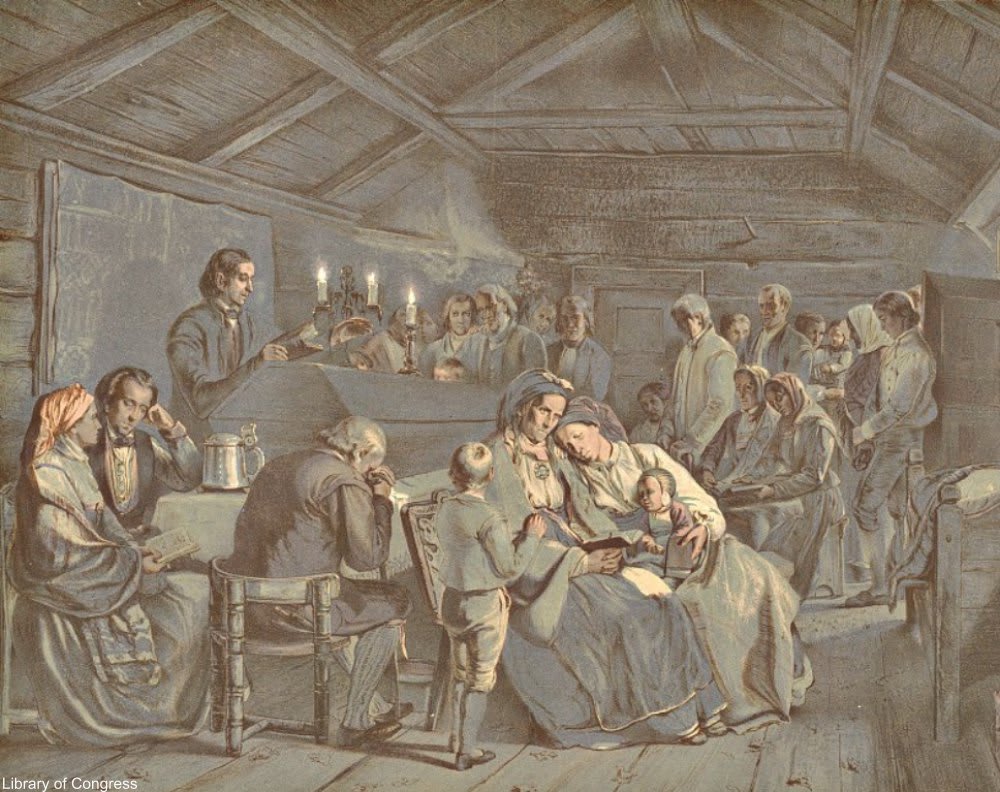 Family in mourning, the preacher gives the eulogy over the coffin. Via/ Library of Congress

By some sources, the occurrence of hasty burial was more common than previously thought. Once per week during some eras a person was reported to have been buried while still alive, a gruesome fact the family found only out later. Many people died from diseases early in life, with symptoms which could come and go or cause paralysis. Unlike the clear methods of testing and treatment we have today, the medical treatment could sometimes be narcotic or sedative in nature and actually cause extended periods of coma or death-like sleep. 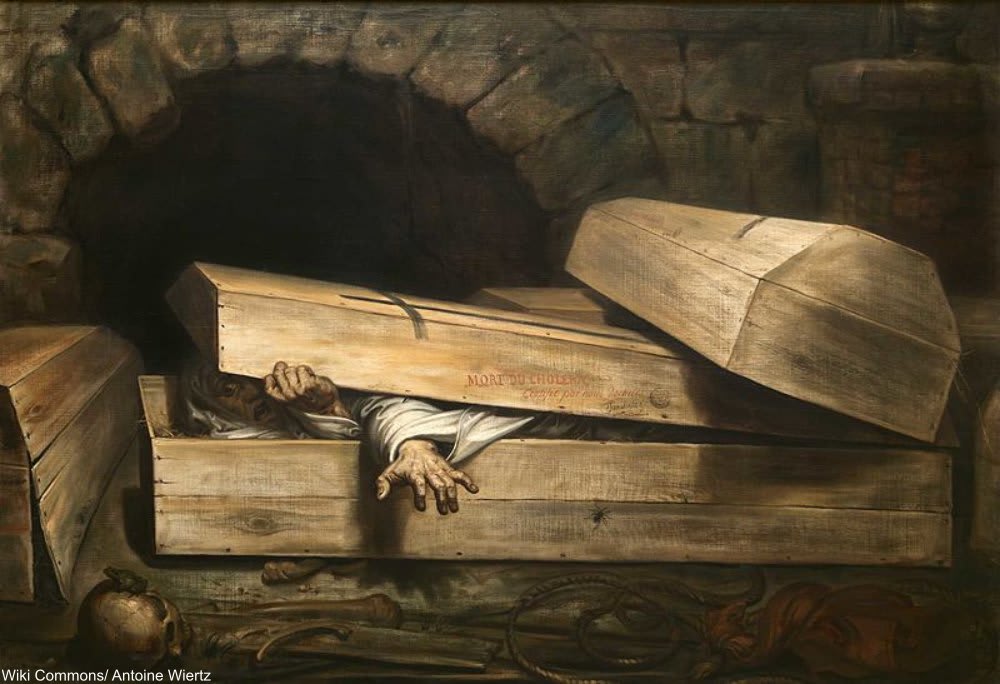 Depiction of premature burial during a cholera epidemic from 1854. Via/ Wiki Commons

Other estimates put the the yearly number of premature burials at around 2,700 in England, but this was hardly a scientific figure. Still, with numbers like these published in medical journals, trade publications, and newspapers, it’s easy to see why the fear of premature burial had grown in importance.

The fire of public horror was stoked with works like Edgar Allen Poe’s “The Premature Burial” and the fears of Victorians were fueled by rumors of acquaintances who had had to live through this most terrifying of ordeals. 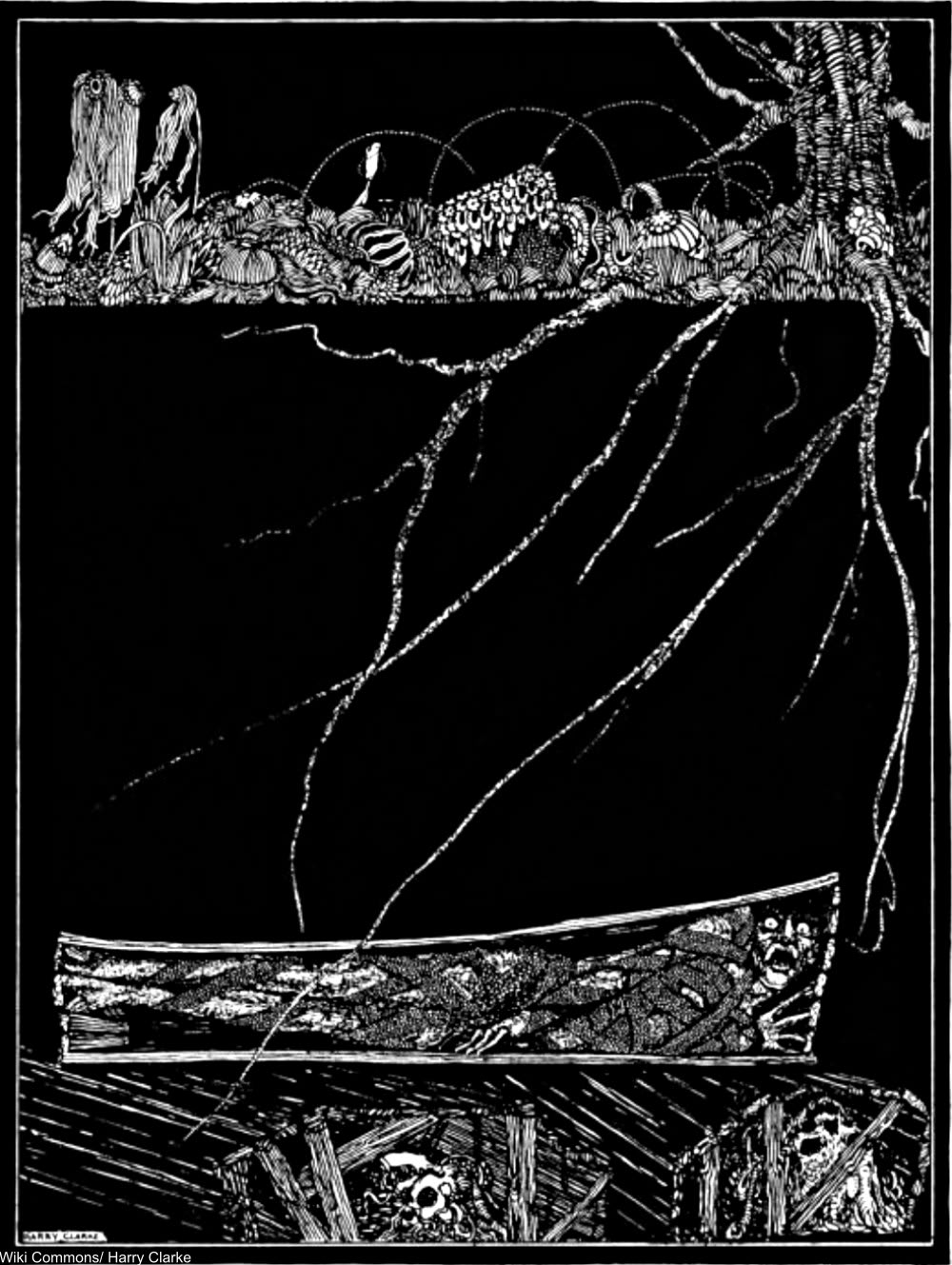 Illustration from “The Premature Burial.” Via/ Wiki Commons

In 1792 when the then-retired President of the Congressional Congress, Henry Laurens passed away, the former delegate from South Carolina had a special set of instructions for the undertaker. Laurens’ fear of premature burial was so great, after having narrowly avoided the scenario with his daughter when she was little, he decided to be cremated upon death. Indeed, he thought that being buried alive would have been much worse than to die in a fire. This was the first time a major U.S. political leader had chosen to be cremated.

How to Avoid a Premature Burial

In ancient Rome, the threat of premature burial is thought to have been the reason why corpses were not buried until 8 days after they were discovered, in order that any sedated, comatose, or otherwise impaired (but alive) person would have time to wake up before the first shovelfuls of dirt were chucked on top of their bodies.

Without a coffin, corpses could be buried in a simple fabric shroud. Inside a coffin, the formerly-deceased was protected from dirt, but ran the risk of suffocation and of severe claustrophobia at the very least should they wake up in such tight quarters. While modern coffins often have hinged doors, many working class funerals only boasted pine boxes with their lids actually nailed on: not an inviting chamber to wake up in!

Some people believe this is why wakes are held in so many cultures, to see if the person wakes up. There is some debate on this, but holding a wake certainly does make sense if being buried alive is a big fear, as it is for many people (phobia of premature burial is called taphophobia). Some doctors and authors of the era suggested ever-increasing vigilance after death in order to observe the corpse.

According to Jan Bondeson, author of Buried Alive: The Terrifying History of Our Most Primal Fear, the intense reaction to potential premature burial was hiding an equally stomach-churning motive.

Many who were vocal in the 19th and even 20th centuries about the danger of being buried alive were also against vivisection and autopsy, a hold over from the days of Burke and Hare robbing graves to fill the ceramic surgery tables of the doctors of the Royal College of Surgeons of Edinburgh. So great was the fear of grave robbers and resurrectionists that loaded booby traps called grave guns were sometimes set up near a grave and could shoot grave robbers if triggered. 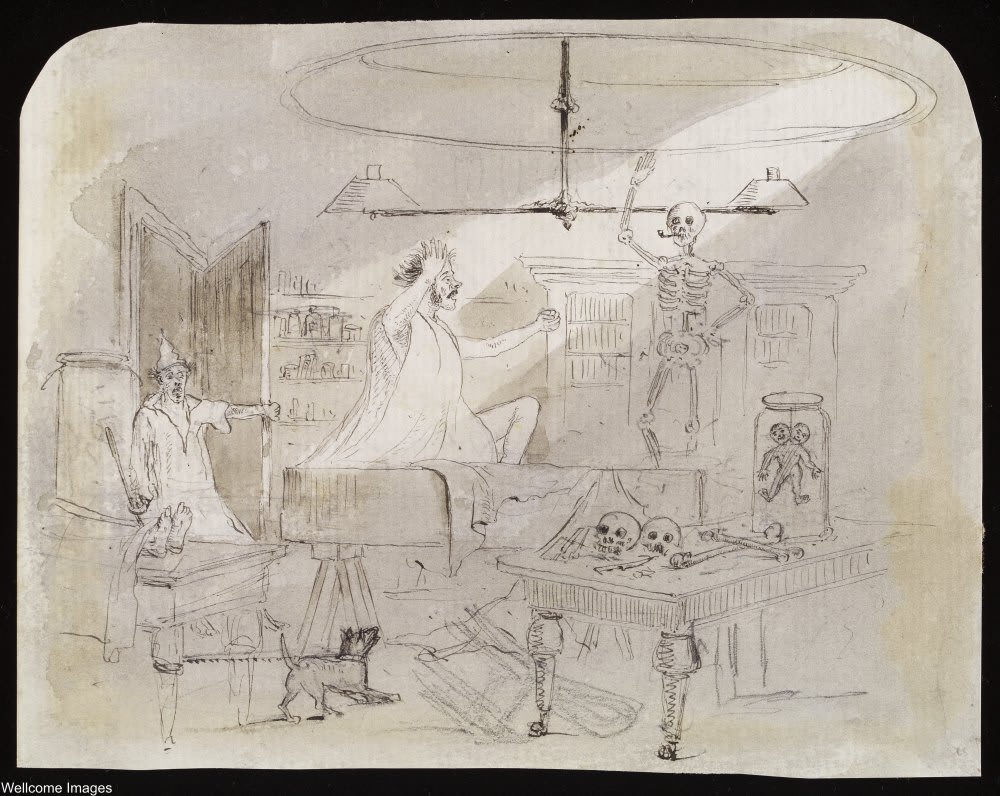 Cartoon of horrified autopsy specimen waking up in the vivisectionist’s work room. Via/ Wellcome Images

At the heart of this international movement to stop hasty certifications of death was also a fear of science, of grave robbing and of defiling the body. Ironically, it would ultimately be science which allowed us to factually conclude, for the first time in history, that someone had actually passed away. Bondeson suggests that public figures of such vehement outspokenness on the subject were eventually seen as sensationalist quacks, especially by clergy members who did not want to wait many weeks after death to bury a congregation member’s body.

During the 1800s people were so obsessed with the risk of being sent to their graves while still breathing that special coffins were designed which allowed a person, should they find themselves un-deceased, to breathe in their coffin and to signal the outside world. 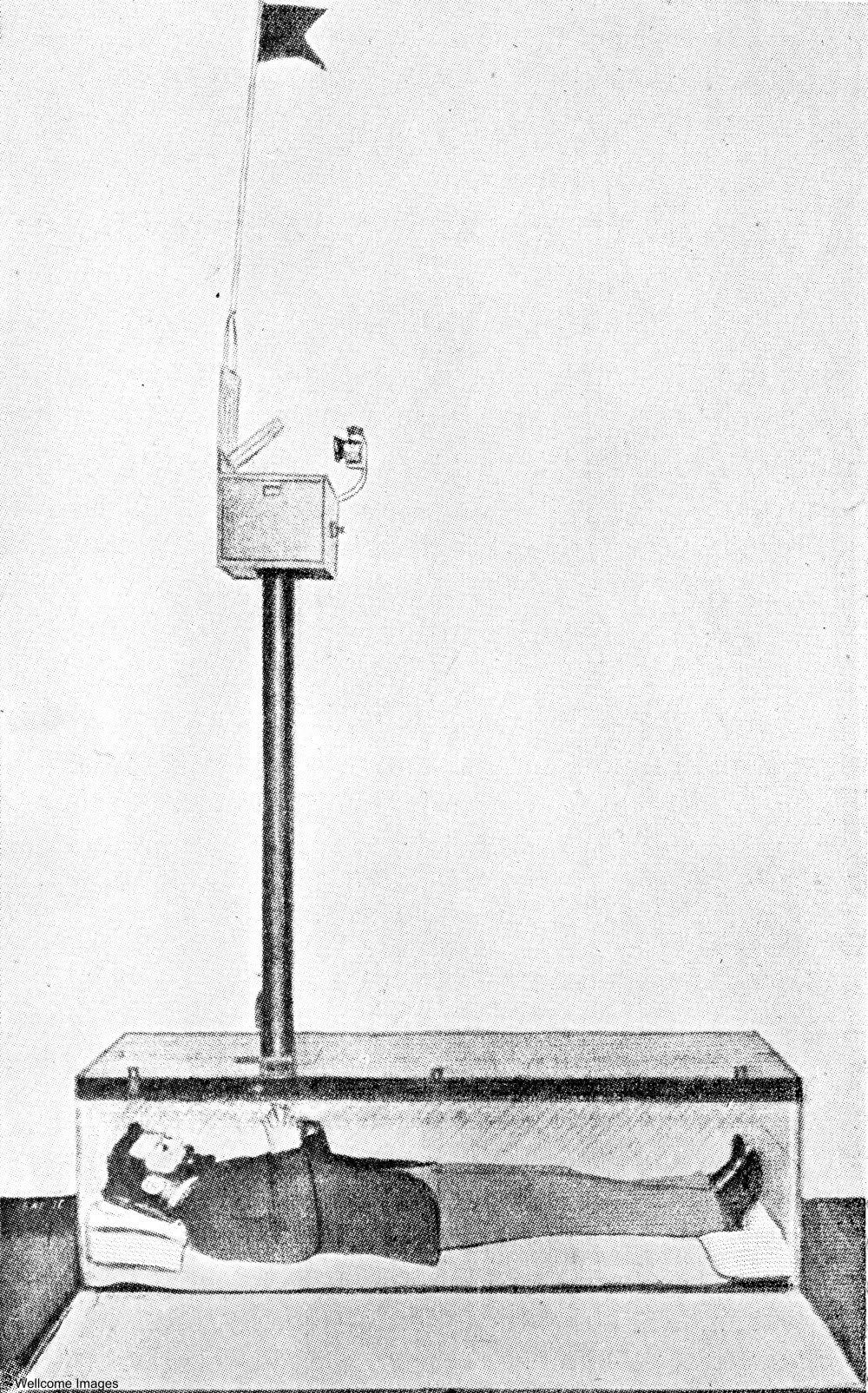 This model allowed the incarcerated victim to wave a flag, ring a bell, and to speak through a tube that reached to the on the surface to let passersby know someone alive was inside. Via/ Wellcome Images

So-called safety coffins were patented and sold as high tech devices to ensure that one could escape should the unthinkable occur (one model was called the ‘life-preserving coffin’). Some had portholes with which to see out and other features which might aid or soothe the buried person. 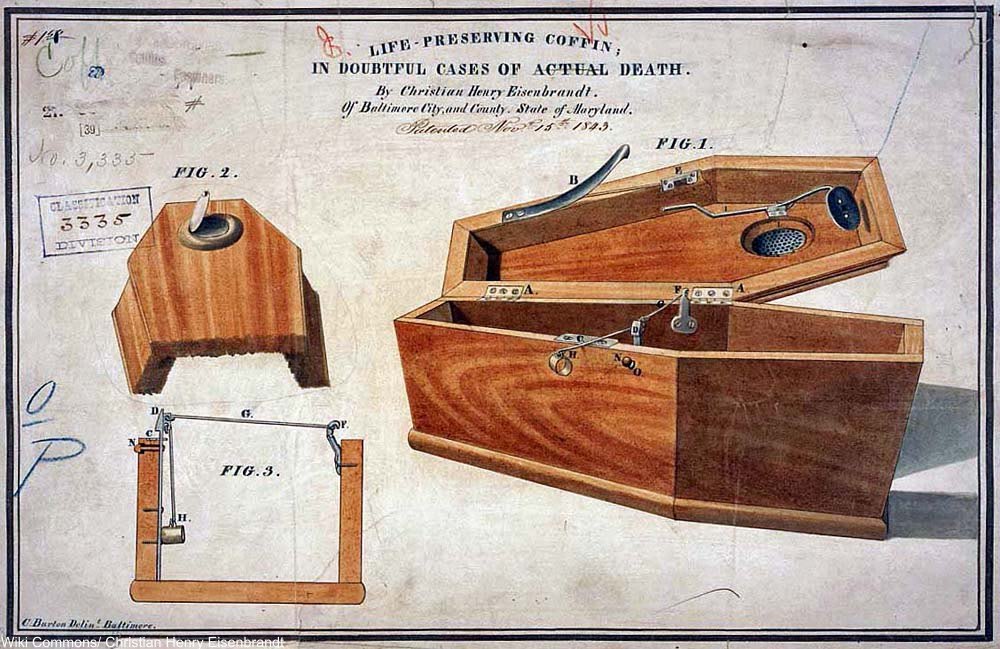 Fun fact: a popular myth in modern times is that the phrase “dead ringer” comes from Victorian safety coffins with bells attached, but the term actually comes from horse racing! Regardless, these safety coffins never really caught on despite so much general hysteria around being buried alive. It may have been that reports of how frequently folks were buried alive were inflated, but for a not insignificant number of Victorians, the threat of being buried alive seemed quite real…just perhaps not real enough to spend the extra money on a special coffin.