Okunoshima is a small island located off the coast of Takehara in Hiroshima Prefecture. Most people know it by its nickname, ‘Rabbit Island’, and it is appropriately named. Ferrel rabbits roam the island freely and animal lovers worldwide come to the island to enjoy what it has to offer. 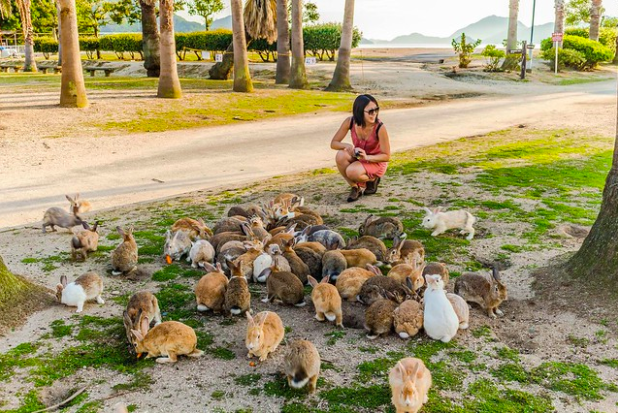 Although people know the island because of the rabbits, they might not know that it was used during WWII as a top-secret chemical testing location. The future of the island may also hold a dark secret as well, at least for the rabbits that inhabit the area.

If you want to go to Rabit Island, you must take a 15-minute ferry ride from Japan’s mainland. Once you are on the island, you can interact with more than 1,000 rabbits that call the island home. You can feed them and even cuddle with them. 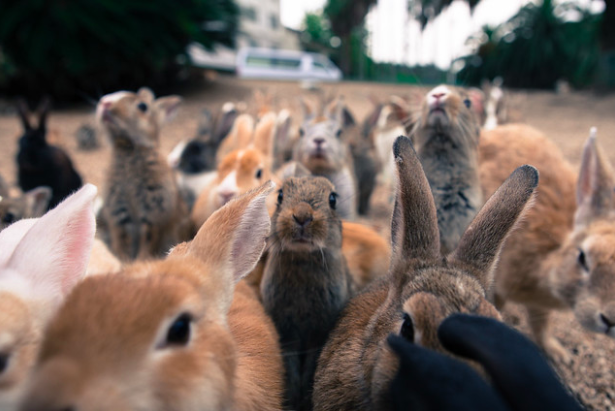 Tourists are encouraged by the local population to interact with the rabbits freely. You can see videos online if you want to get an idea of what you will see once you are there. A good one is the 2014 viral video showing a ton of rabbits following a woman with food.

The reason why there are so many rabbits on the island is that there are no natural predators. There are also tourists who come every day to spoil the rabbits, resulting in a population boom. The rabbits are not pets and they aren’t kept in cages. They are wild animals and will struggle to get free if you try to actually pick one up and snuggle with it.

Although the rabbits are wild, Okunoshima is not. The island has buildings and roads. It even has a hotel for those who want to stay. It’s a part of Japan’s National Park Resort system in the middle of the Seto Inland Sea of Japan.

Rabbit island is a nice place to go and enjoy some fluffy happiness but it also has a history that you can explore when you are there.

Nobody is sure why the rabbits were brought to the island but historians feel they are there courtesy of the Japanese Government. They may have been brought to the island in 1929 because of the chemical weapons testing that was taking place. Okunoshima was a testing facility for mustard gas and other chemicals during WWII. They produced over 6 kilotons of those chemicals and the rabbits were the test subjects.

Those who worked on the island were sworn to secrecy. The island was even removed from maps to keep the location private and to hide what they were doing. The poison gas produced on ‘Poison Gas Island’ may have been responsible for the death of some 80,000 people when Japan invaded China in the 1930s.

When the American military was occupying the island after WWII, they euthanized about 200 rabbits that were kept there. The island was never fully decontaminated and the traces of poison gas in the water could kill the rabbits and have an ill effect on humans. 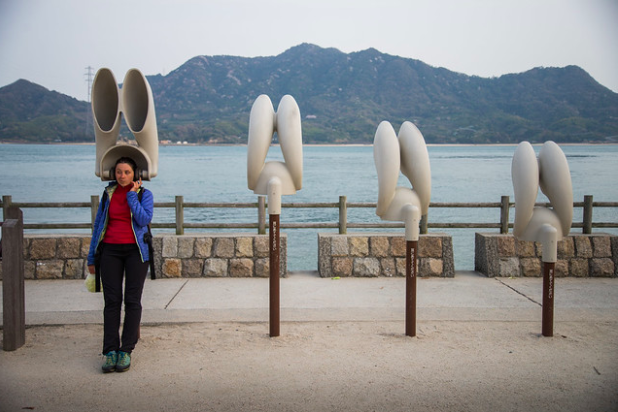 In 1971, a group of school kids released 8 rabbits on the island and it may have started the new population. In 2007, the number of rabbits was estimated to be at 300 but it keeps growing. Japan does not allow hunting and no new animals are brought on the island.

A Look at the Future Of Rabbit Island

We are all aware of how quickly rabbits can reproduce and the population explosion is putting the rabbits in danger. The island does not have enough natural vegetation to support such a large population of rabbits.

In addition, the rabbits need the food they get from human visitors but it isn’t there on a steady basis. There may be many visitors when the weather is warm but when it is cold, the food from visitors drops off sharply. In addition, people typically feed the rabbits cabbage, which isn’t the best choice for bunnies. 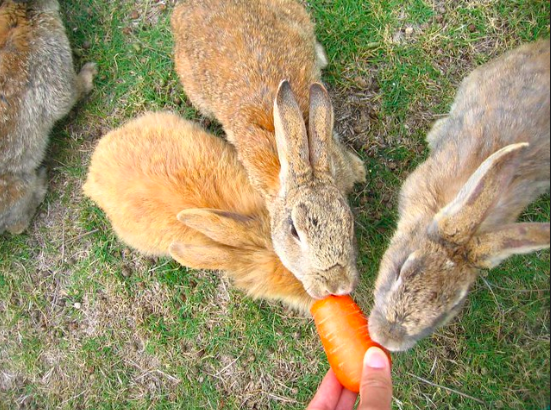 The rabbits are therefore dealing with a ‘feast or famine’ situation. Typically, a rabbit will live for 10 years or so but on Rabbit Island, the life expectancy is only 2 years.

Even though viral videos show a horde of bunnies chasing after tourists, it isn’t a game for the animals. They are hungry and will do what they can to get the food they need.

“We continue to wrestle aiming at the coexistence of the wild animal with organizations,” Takashi Seki at the Ministry of the Environment reported. “Excessive artificial intervention is undesirable.”