A Tennessee boy has been flooded with inspirational messages and offers of support from celebrities and world leaders after a video of him tearfully explaining the daily bullying he experiences at school went viral.

In the video, Keaton chokes back tears while telling his mom how other students call him ugly, make fun of his face and nose, and tell him that he has no friends. One bully even dumped milk on him and stuffed ham down his clothes.

“Just out of curiosity, why do they bully? What’s the point of it,” the middle schooler asks his mother, “Why do (they) find joy in taking innocent people and… being mean to them? It’s not OK.”

Keaton’s mother posted the minute-long clip Friday, explaining that she had filmed Keaton at his request “after he had me pick him up again because he was afraid to go to lunch”.

The video has since been viewed more than 22 million times on Facebook and millions more on Instagram, where Keaton’s story has drawn the attention of numerous celebrities including Katy Perry, Victoria Beckham, Justin Bieber, Cardi B, Snoop Dogg and many others, many of whom made offers of friendship and gifts.

One of the most touching responses came from a local NFL star, Tennessee Titans All-Pro Tight End Delanie Walker, who recited a poem to Keaton via his Twitter account:

@DonteStallworth @Lakyn_Jones hopefully my video and the tweets that Keaton have been getting brings awareness to bullying and how serious it is in our school system pic.twitter.com/1Dujv3RxA5

Both Snoop and Justin Bieber asked Keaton to speak with them privately via the Instagram app’s direct message feature, while also backing Keaton’s message with posts of their own.

Bieber leveraged his 95 million Instagram followers to send a shot across the bows of bullies everywhere:

“The fact that he still has sympathy and compassion for other people when he’s going through it himself is a testament to who he is,” Bieber said. “This kid is all-time. He’s a legend. Go check him out. His name’s Keaton.”

Bieber’s own video response to Keaton has been viewed nearly over four million times. Other responses included:

“This broke my 💔 today,” posted Katy Perry. “Please be kind to one another.”

Rapper Cardi B condemned Keaton’s middle-school bullies as “not gangsta”.

More than 3,500 posts on Instagram feature the hashtag #standwithkeaton. 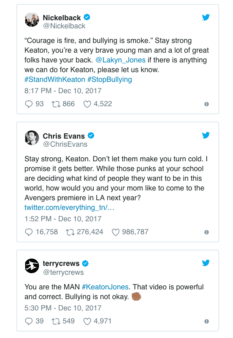