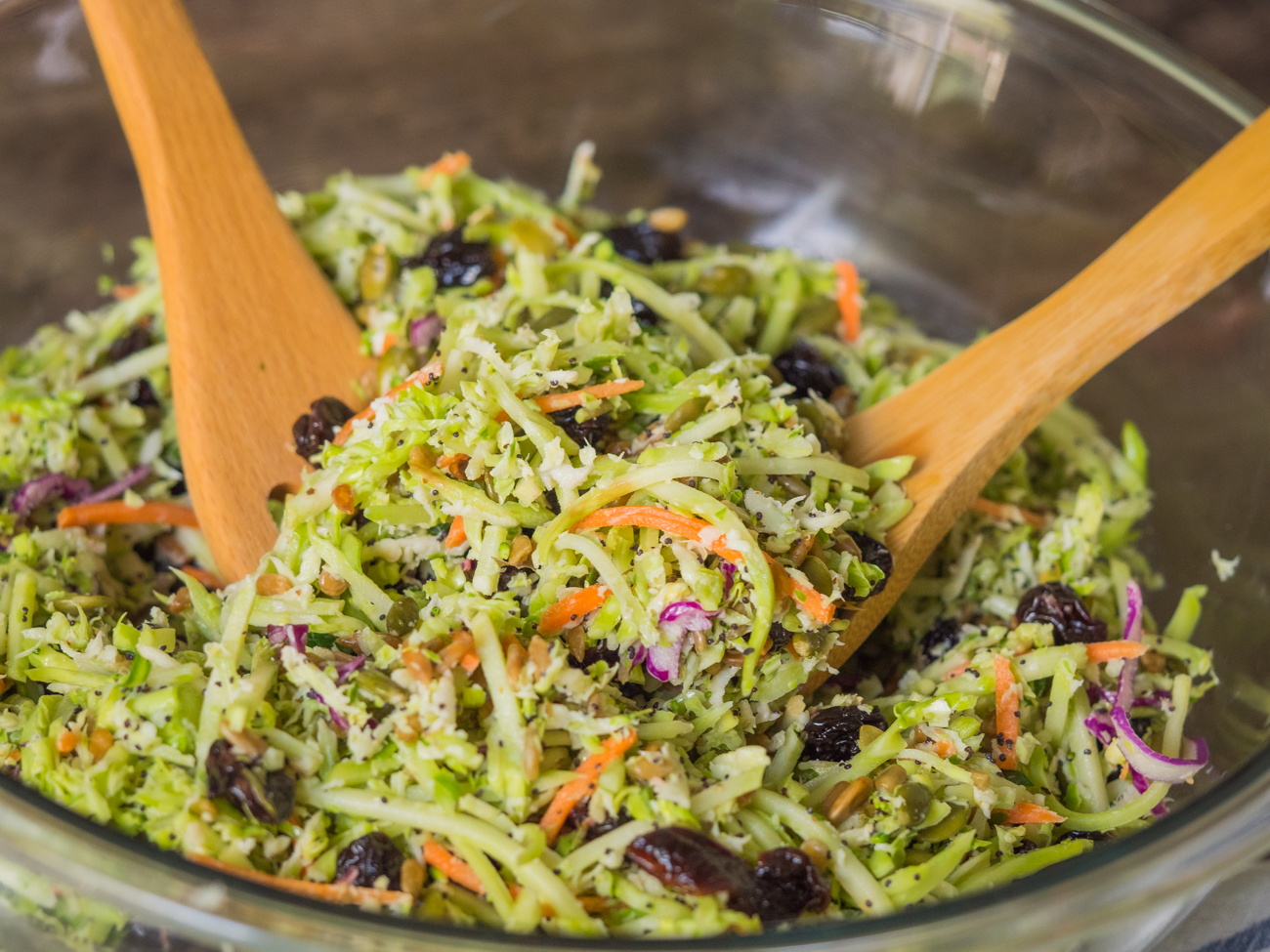 Brussels sprouts often get a bad rap as something that most closely resembles musty old gym socks, but that’s only the case if you’re cooking them wrong. (Like really, really wrong.) In reality, they’re totally delicious – bright and green, a little nutty, with a hint of cabbage flavor. If your parents were the type to boil or steam them into mushy oblivion, you might not even be aware of all they’re capable of, but this quick slaw truly does them justice. It showcases their best qualities without requiring any cooking at all. 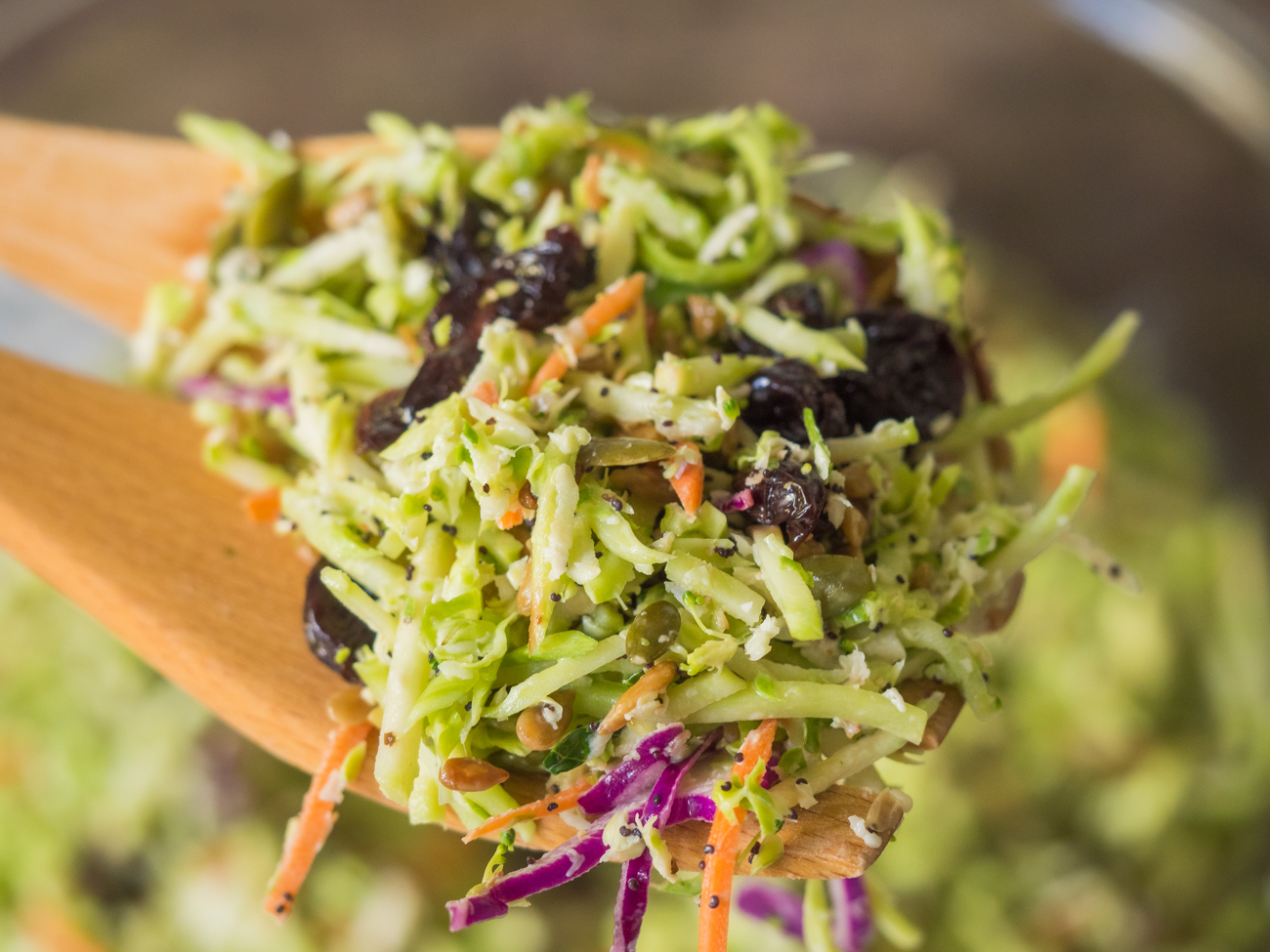 This slaw uses Brussels sprouts and broccoli, so it’s a celebration of all things cruciferous. The sprouts are left totally raw, but you use your food processor to shred them into delicate shaved morsels, and this allows their crisp nuttiness to really shine through. Paired with sunflower and pumpkin seeds, there’s a whole lot of crunch going on here, but that’s backed up by some chewy sweet dried cherries (or cranberries, if you’d prefer). 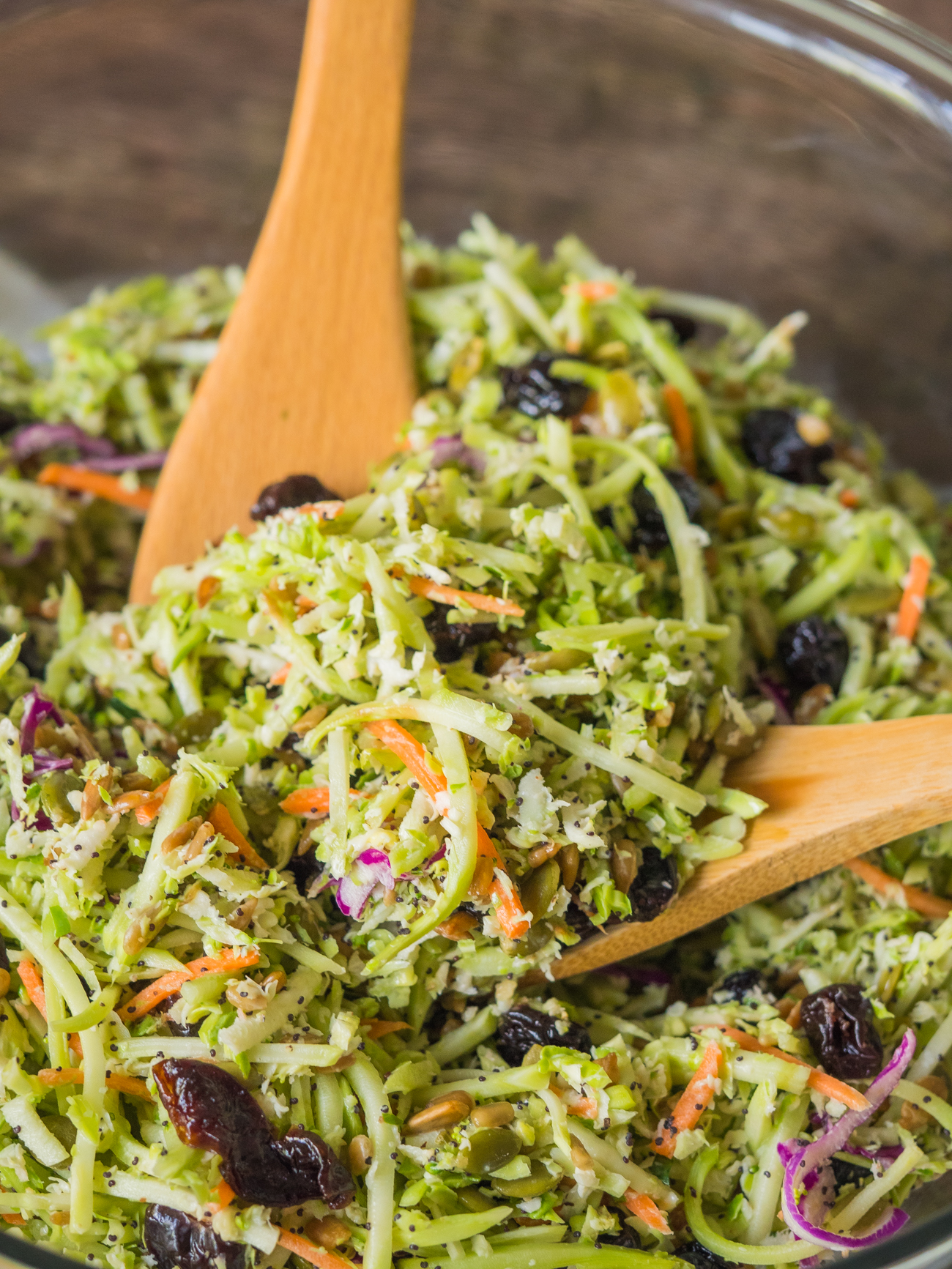 Speaking of sweet, the honey poppyseed dressing takes things in that direction too, but not in a cloying way. It’s balanced with lemon juice and apple cider vinegar and it’s just the thing to back up the broccoli and Brussels sprouts. 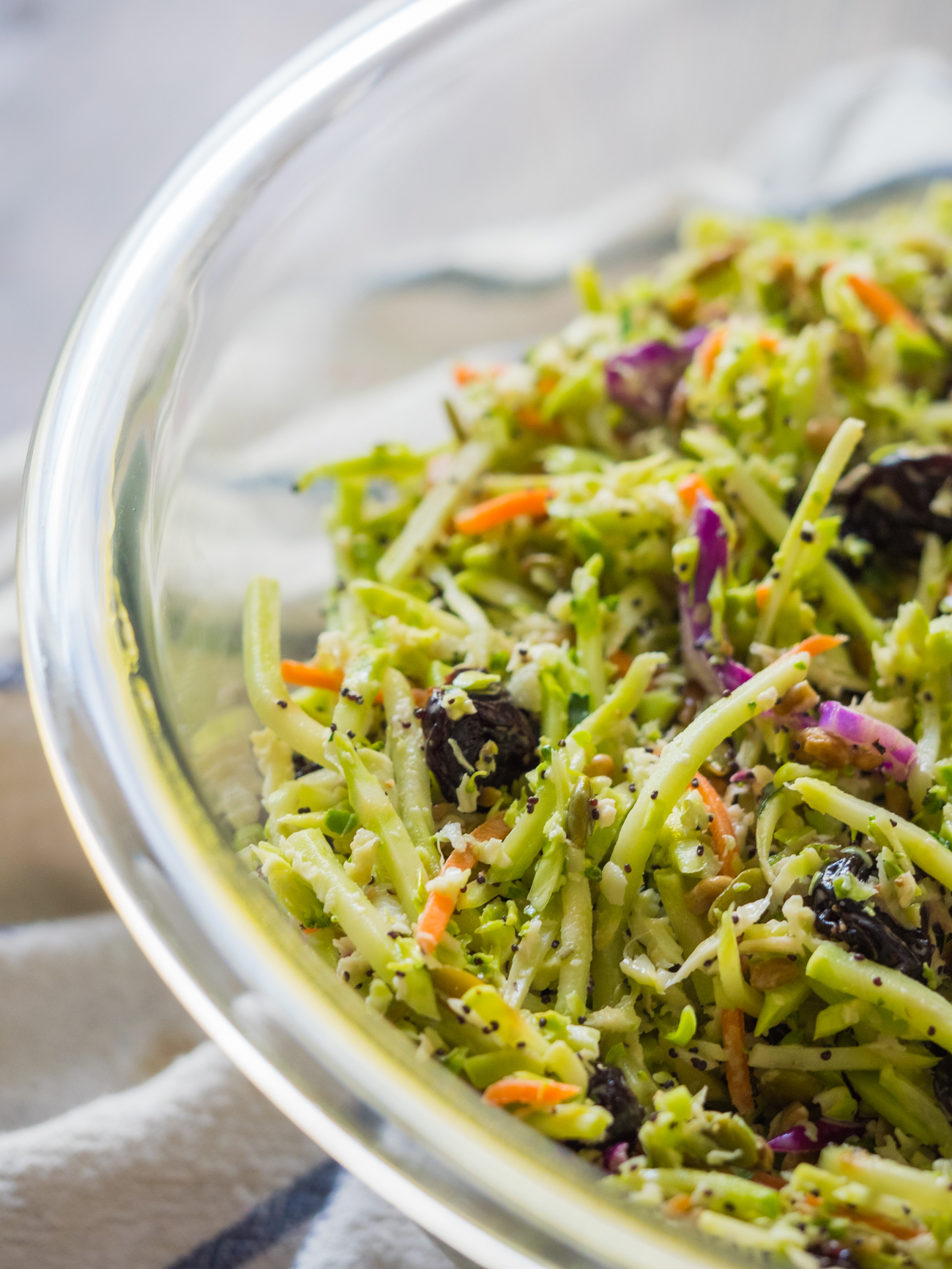 Since the veggies used are pretty sturdy, this is a salad that stores really well, which makes it an outlier in the meal prep category. And since it relies largely on broccoli slaw mix, it’s also really quick to make. Just a quick shave of the Brussels sprouts and whisk of the dressing and you’ve achieved major slaw success. 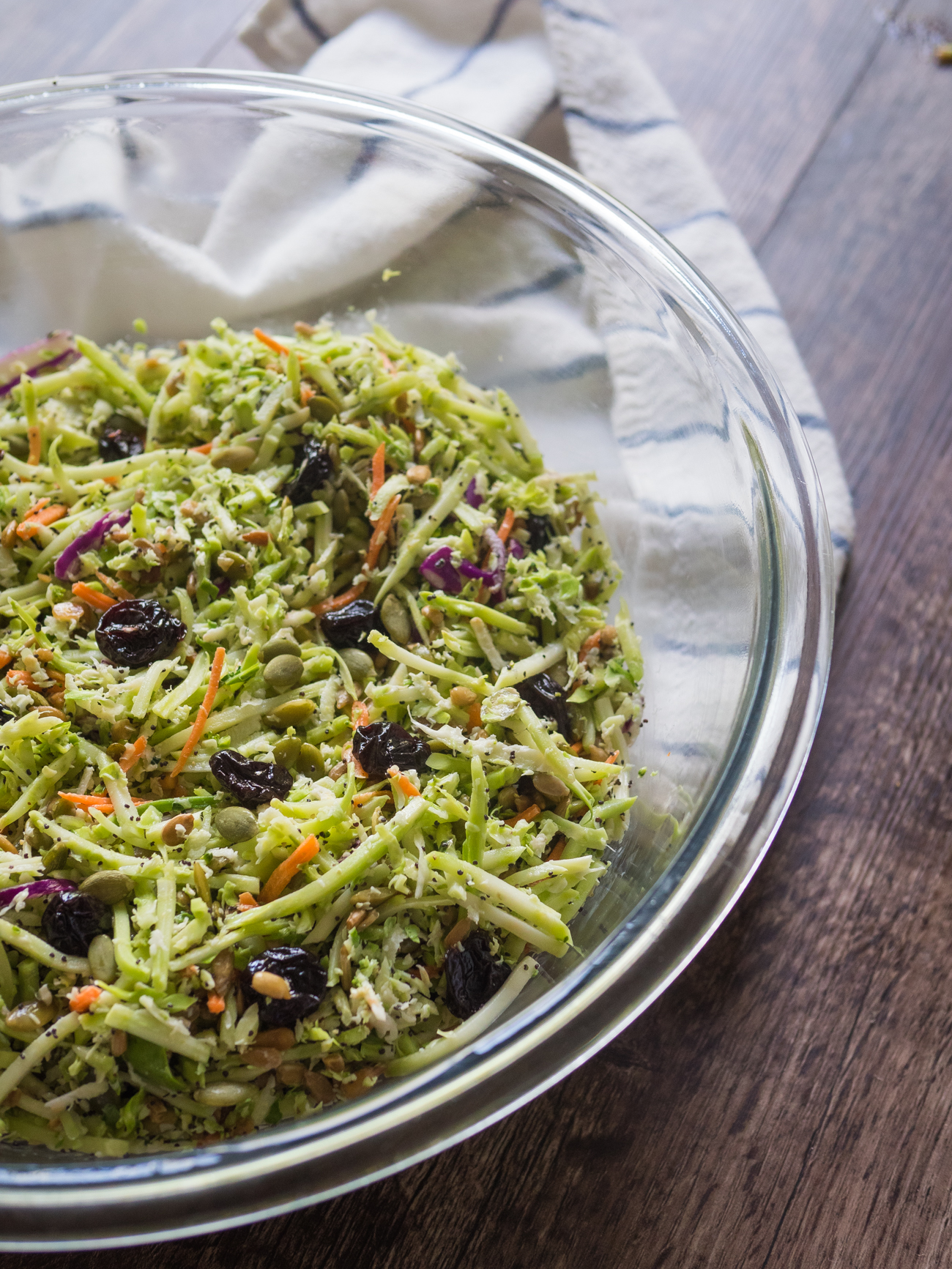