In the Middle Ages, expanding trade led to host of new fashions, most of which were accessible only to the very wealthy. Paintings from the era immortalize the rich, so these are the fashions we most often see from the era. Pointy hats and shoes, dangerously long belts, and other items of pure luxury sent a message to anyone who saw them. The hierarchy that clothing represented was so visceral that in England in the 1300s there were codes of dress put into place that made it illegal for certain people to wear certain types of clothing. These laws were updated with Queen Elizabeth I who made some very specific changes.

Throughout the Middle Ages there were a number of fashions that caught on, few of which were practical, but all of which are extremely fascinating today. Here are 9 bizarre medieval fashions explained. 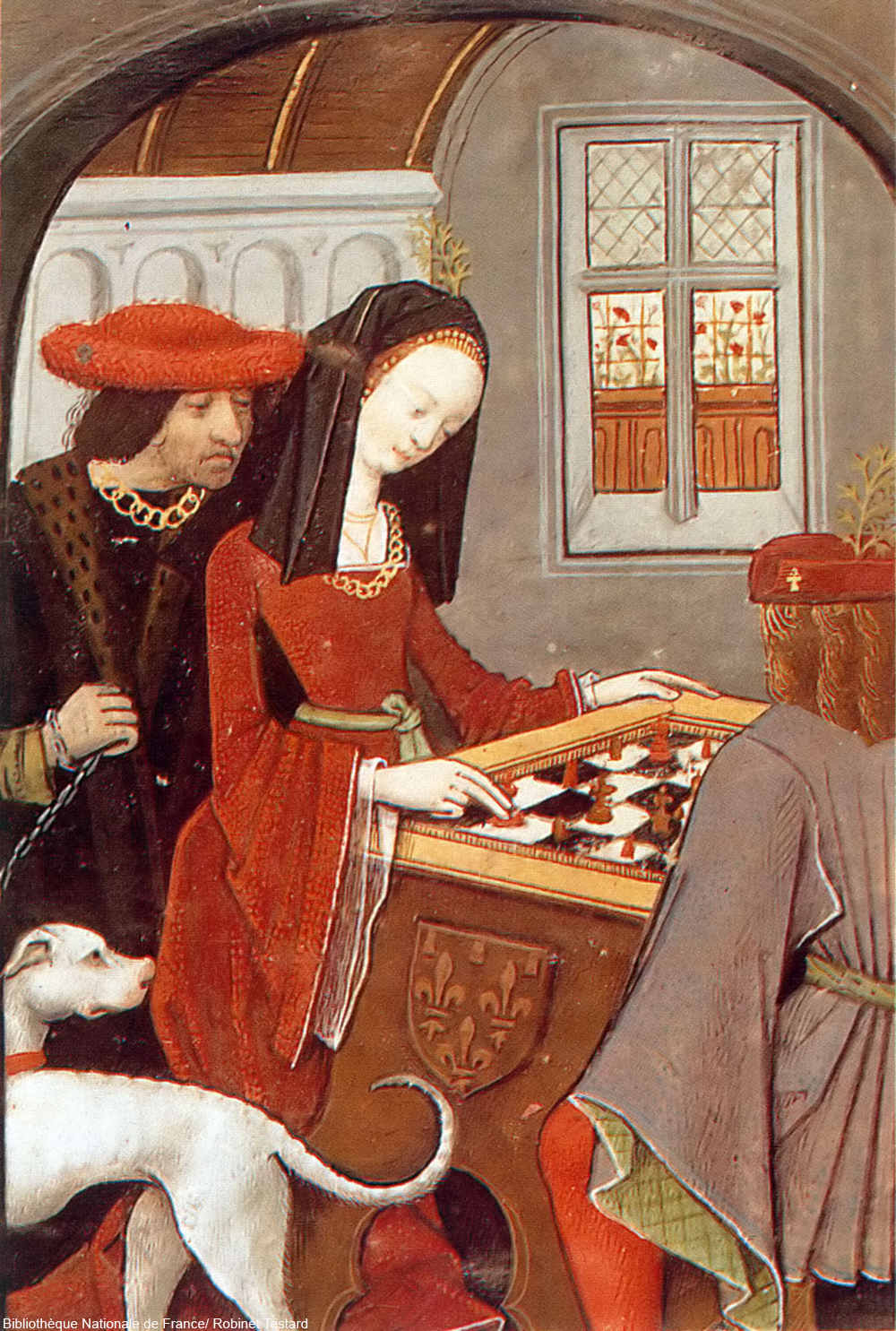 When we think of Robin Hood, this is the style of hat that most often comes to mind. The pointed brim is reminiscent of a bird’s peak, and was a departure from the softer styles that came before it. These hats could be made from wool or leather and often featured some sort of plumage as an accent. 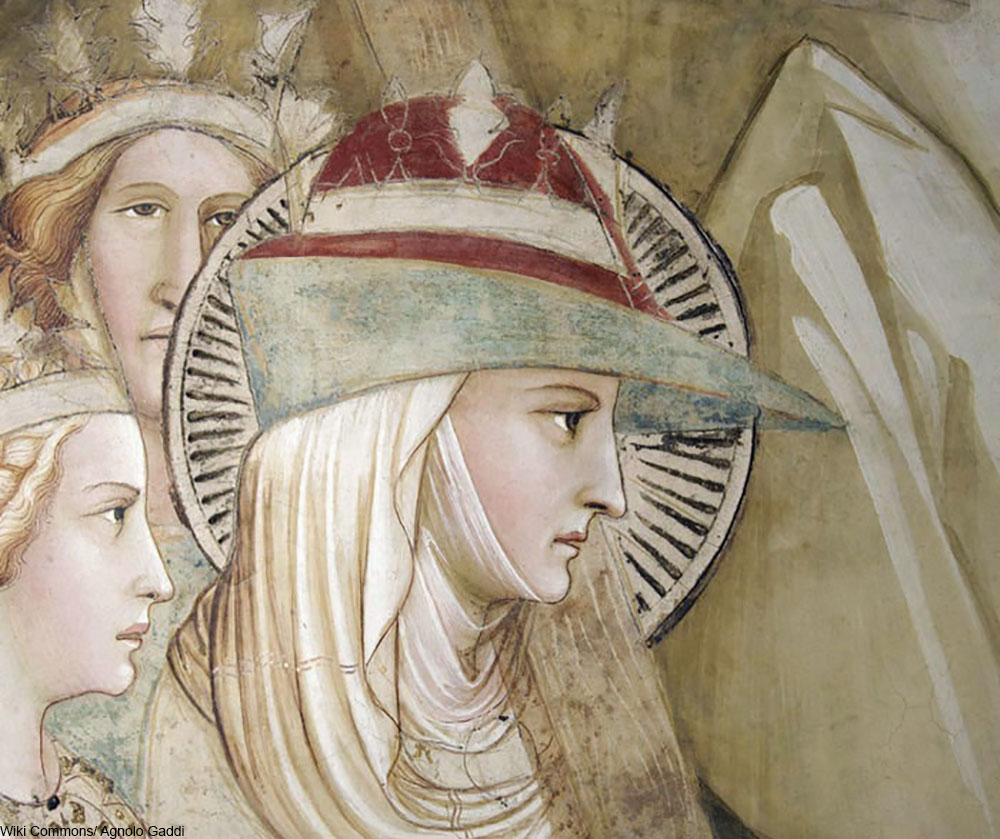 These were called crakows or poulaines because they originated in Kraków, Poland which was the capitol until 1596. The extremely long point of the shoe exuded wealth since no laborer of any kind could have gotten much work done with an exaggerated toe like that. The longer they were the more wealth it proved a person had. Men’s shoes in particular were extra pointed, although women’s fashion also adopted a pointier toe. 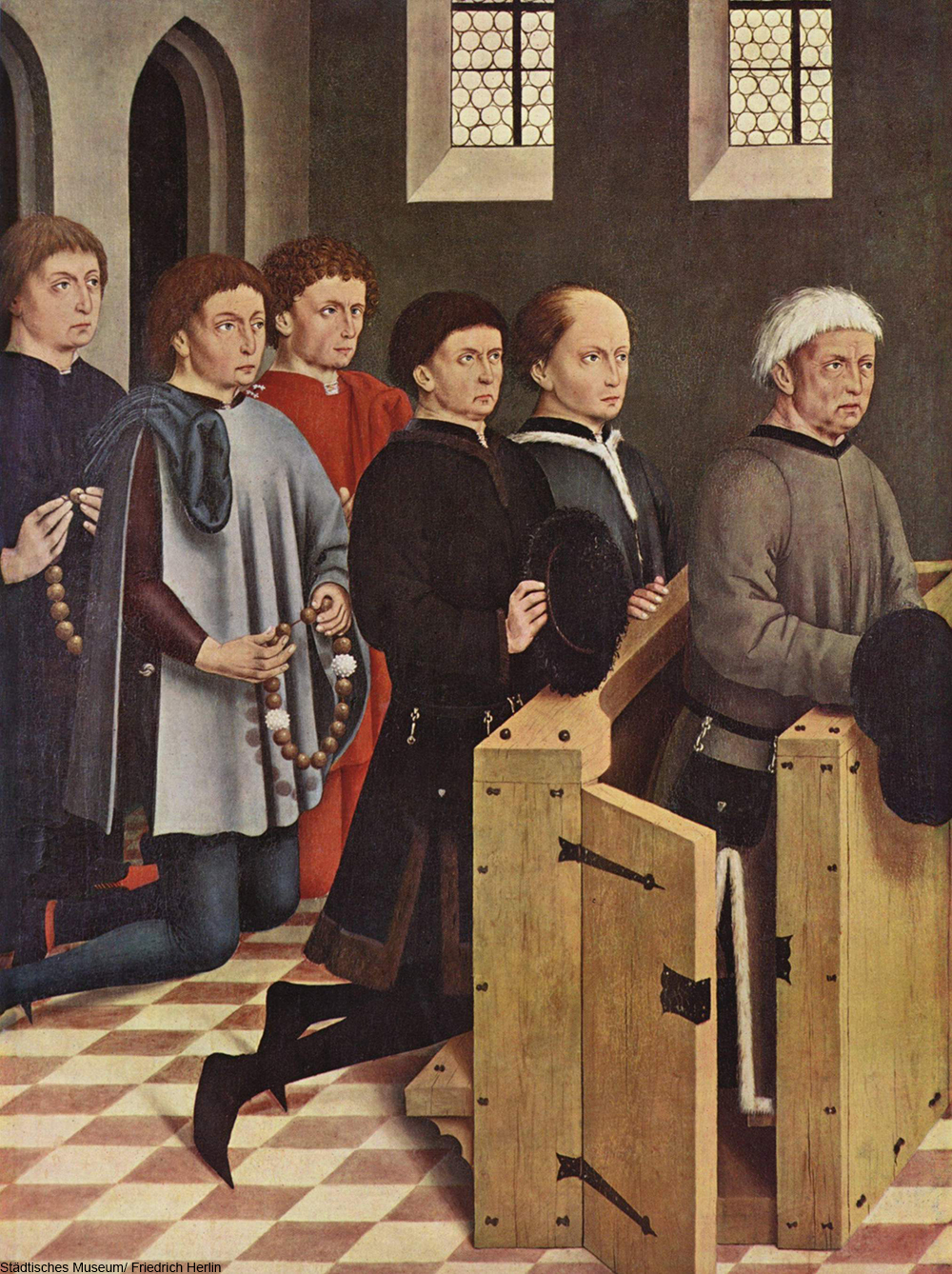 For ladies the biggest point was on their heads, not their feet. Hennin hats were brought to Europe by Marco Polo from Mongolia, where the hats served to distinguish women from men in their otherwise homogenous fashion world. They caused quite the commotion, quickly becoming the hottest new thing for the wealthy. At the same time, the extravagant luxury drew hatred from Christian leaders like Friar Thomas, a traveling preacher in England who instructed his followers to yank the flamboyant hats off the heads of whoever wore them. 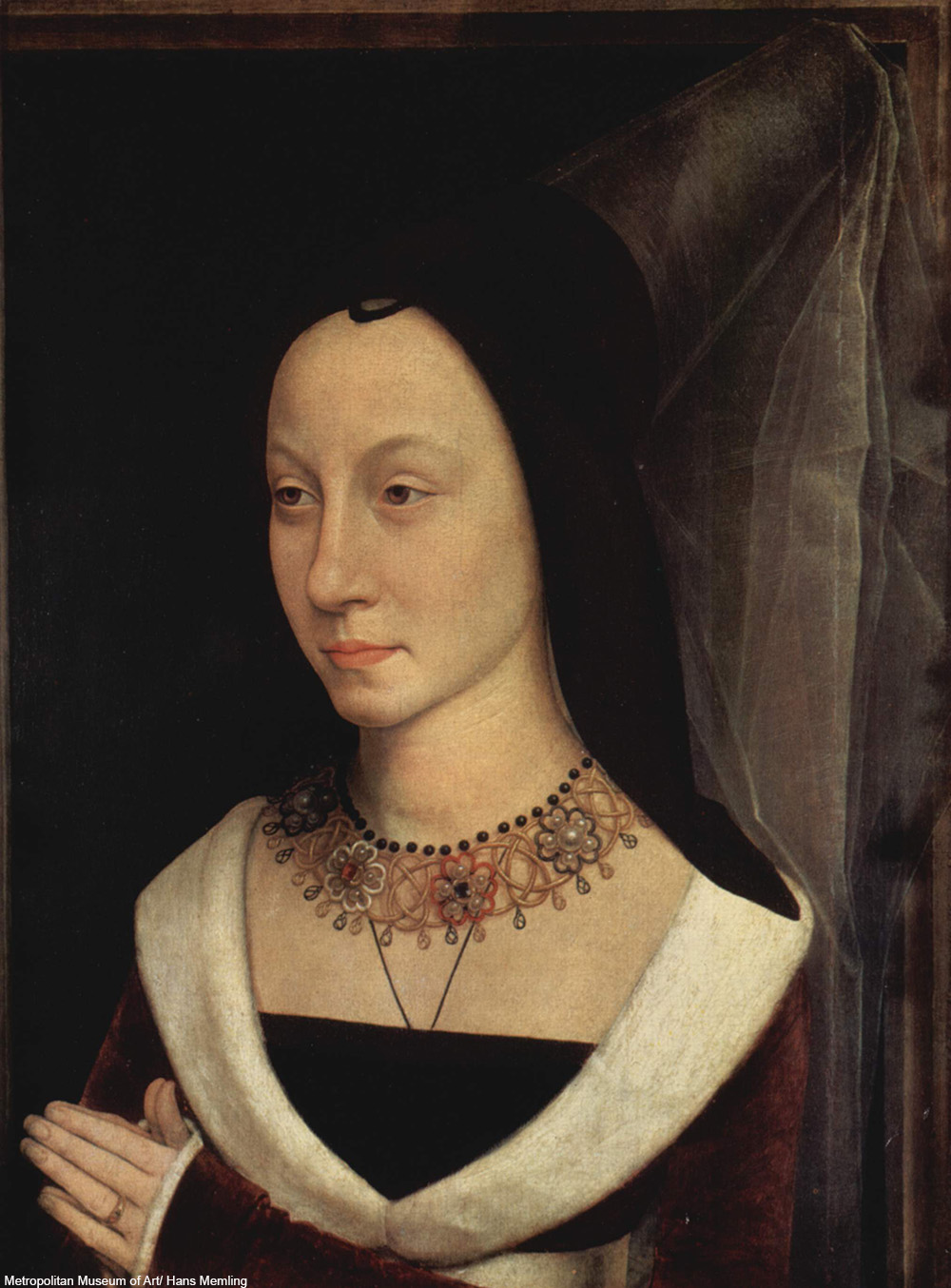 Much like a bullet bra might quickly deflate if left unstuffed, the bombast sleeve was an inflated sleeve shape which was then filled with moss or other soft material to create the appearance of huge biceps. The chest of a man’s doublet could also be puffed up in imitation of armor. The exaggeration of the form is where we get the word “bombastic” from today. 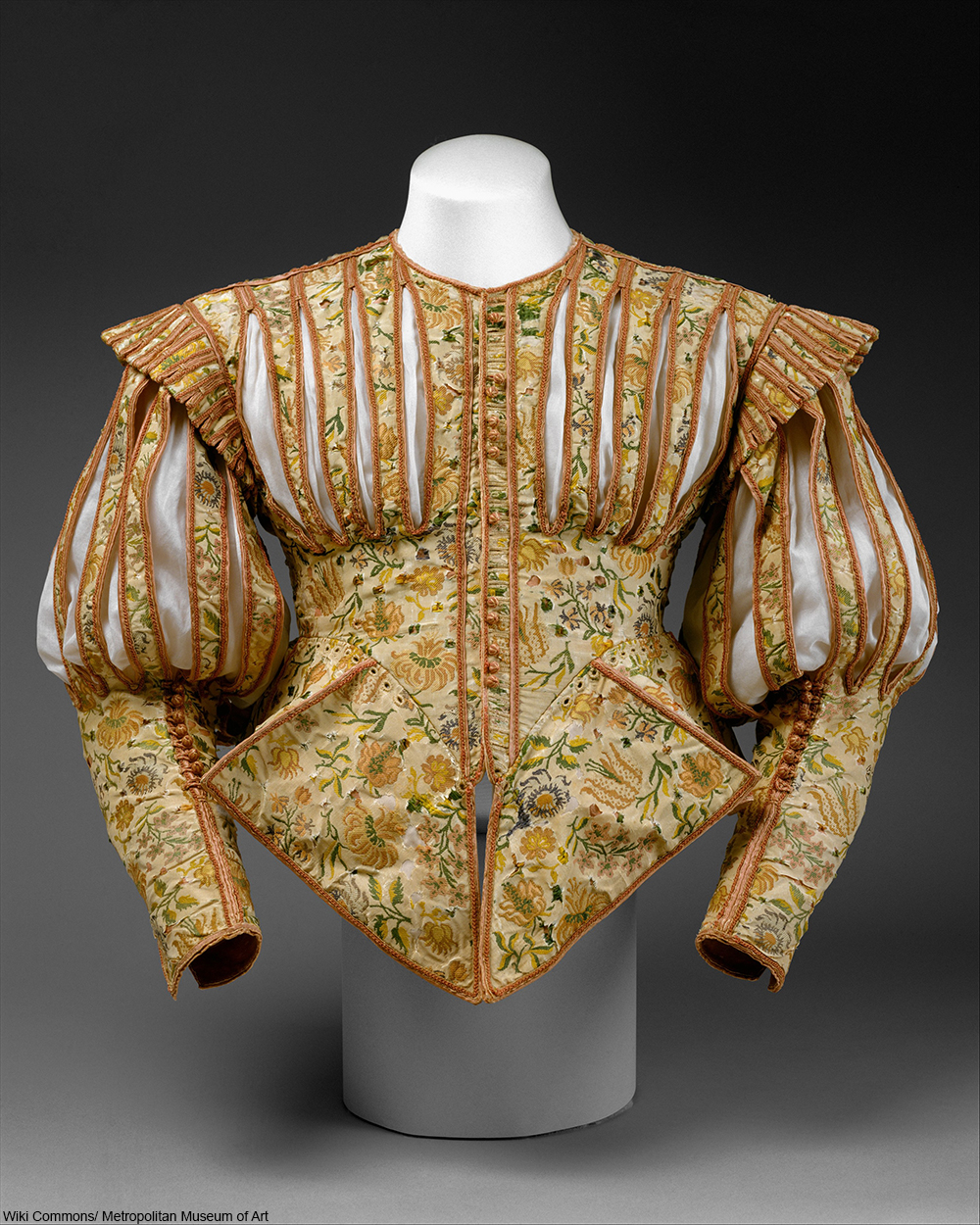 These extra long sleeves were occasionally worn my men, but were more commonly the territory of women. Sleeves that trailed to the ground proved you weren’t poor enough to do any kind of work. Think of them as really, really long bell sleeves. These elaborate sleeves could include hundreds of pleats, making them quite expensive. 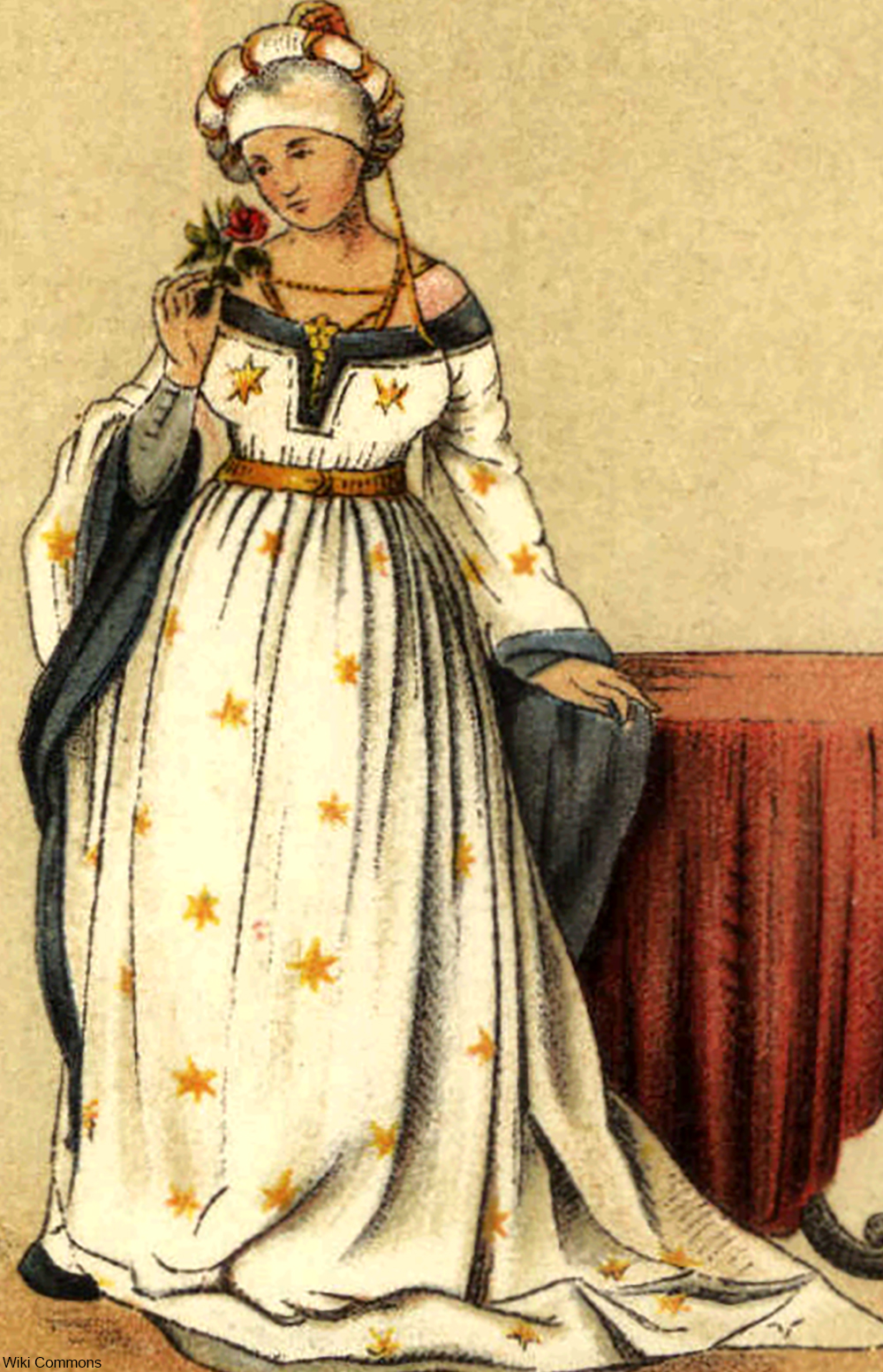 In the streets of Venice, which flooded in the Middle Ages as well as in the modern era, women devised wooden stilt shoes on which to walk so as to not ruin their shoes. At the time ladies shoes could be made from delicate silks or kid skin leather, neither of which would stand up to heavy abuse. The chopine shoes caught on for fashion reasons and the higher the shoe the wealthier the woman. Some women even had attendants to help them balance as they moved through the city. These shoes technically were invented right after the Middle Ages, but retain the status-seeking grandeur that medieval clothes bore since being tall was (and still is) associated with being important. 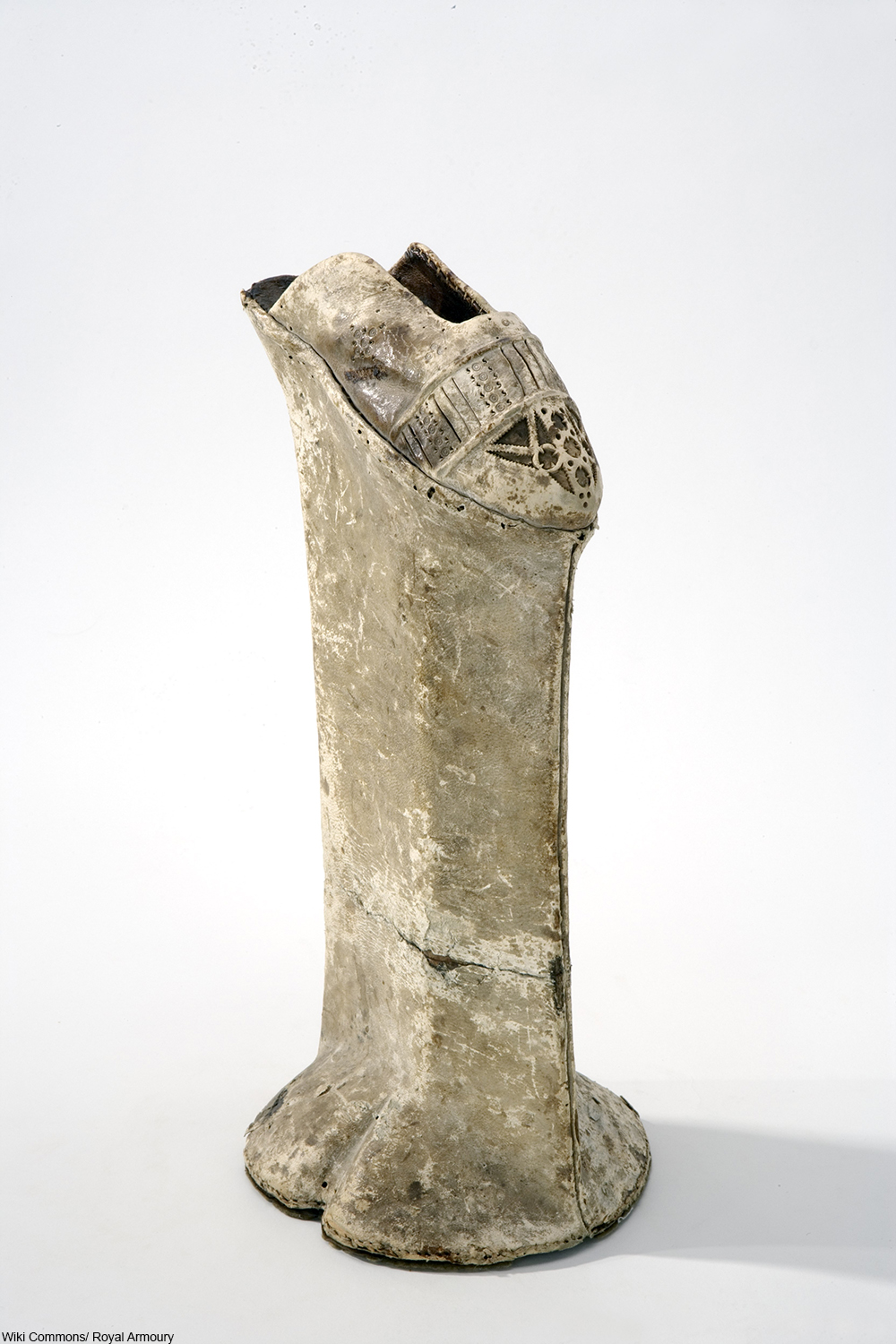 These hats evolved as a way to wear one’s fabric hood up and out of the way when it got too hot, say in the afternoon when the chill of the morning had been banished by the sun. Keep in mind that coats hadn’t been invented yet and most people wore vests, capes, or hoods to keep out the rain and wind.

Soon these makeshift head coverings took on a life of their own as fashion dictated that any man (and even some women) who wanted to appear in style was wearing the chaperon. They were also called liripipes.

The evolution of this style also led to the German gugel, a tight-fitting cap with a ridiculously long “tail” that went down the wearer’s back. 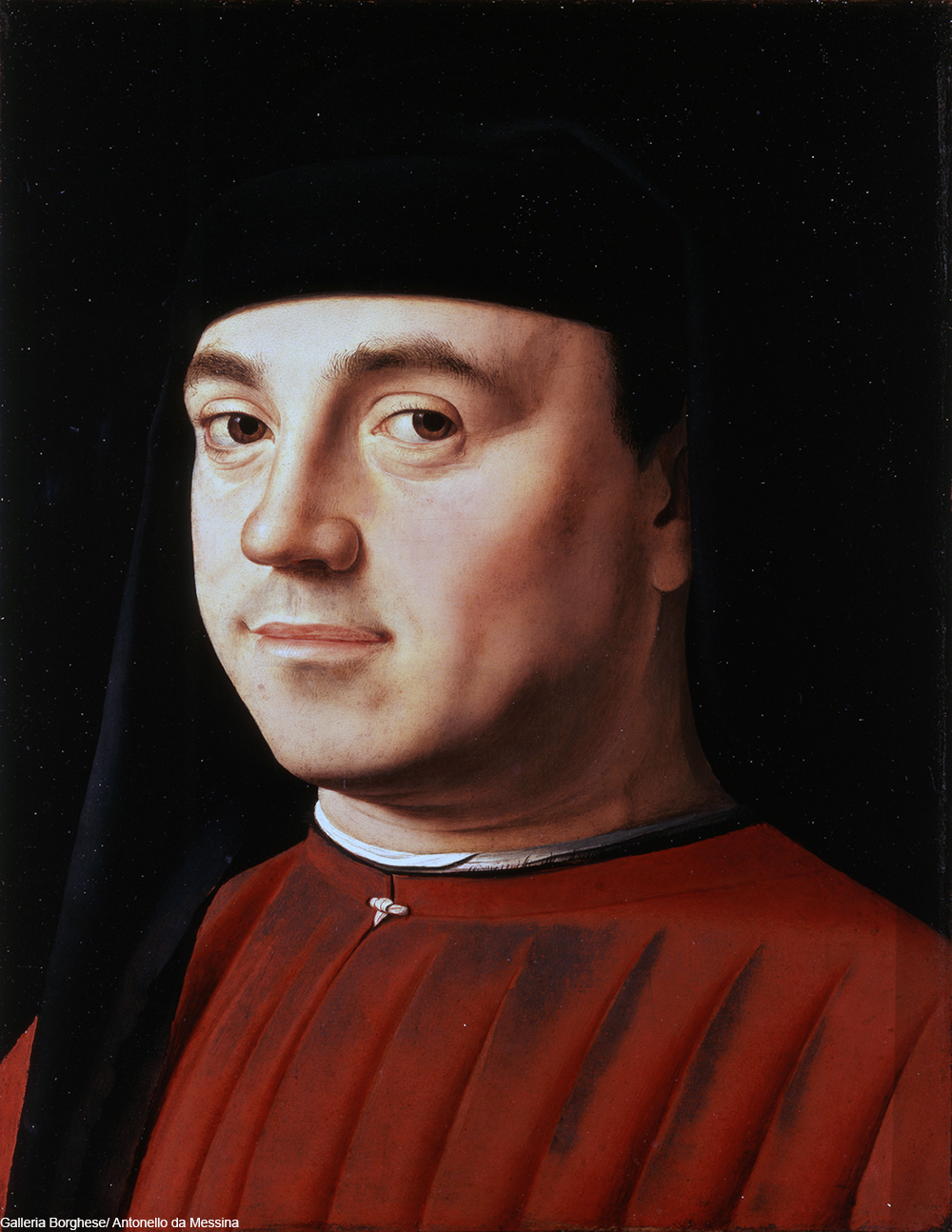 We think of these garments today as underwear to keep one’s tummy in check, but in the Middle Ages the term girdle simply referred to a belt. These belts were often embellished with metal, leather, embroidery, or gems in order to decorate and show status. Often worn by women over their long kirtle dresses, they were not exclusive to women as men also wore girdles. Sometimes these accessories could be very long and the longer they were the more fashionable they were! 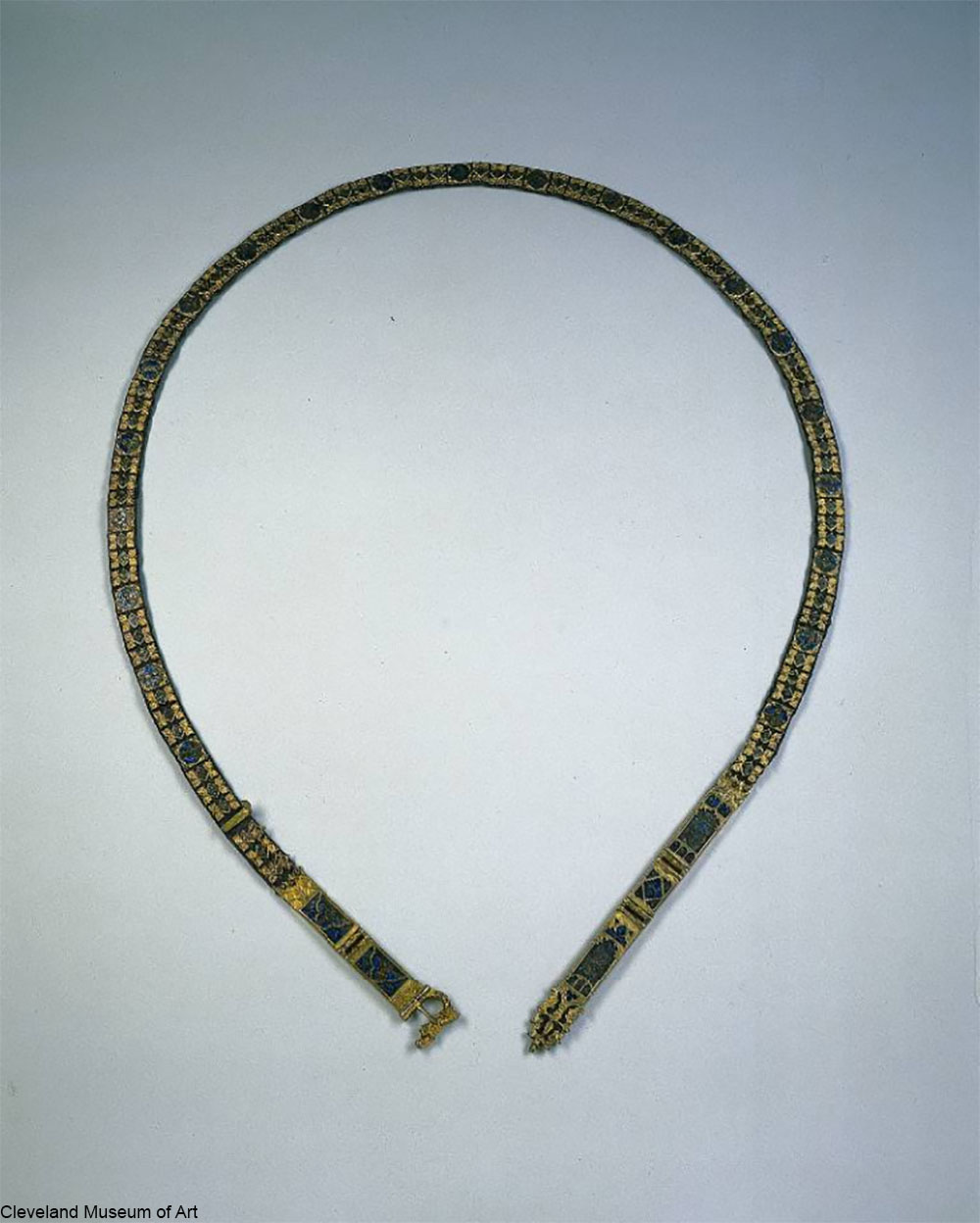 Via/ Cleveland Museum of Art

Today we know wimples as something only nuns wear, but during the Middle Ages it was considered only right for women to cover their hair in order to be modest. Unlike nuns, laywomen’s wimples could be slim, colorful, patterned or even adorned with ornaments. 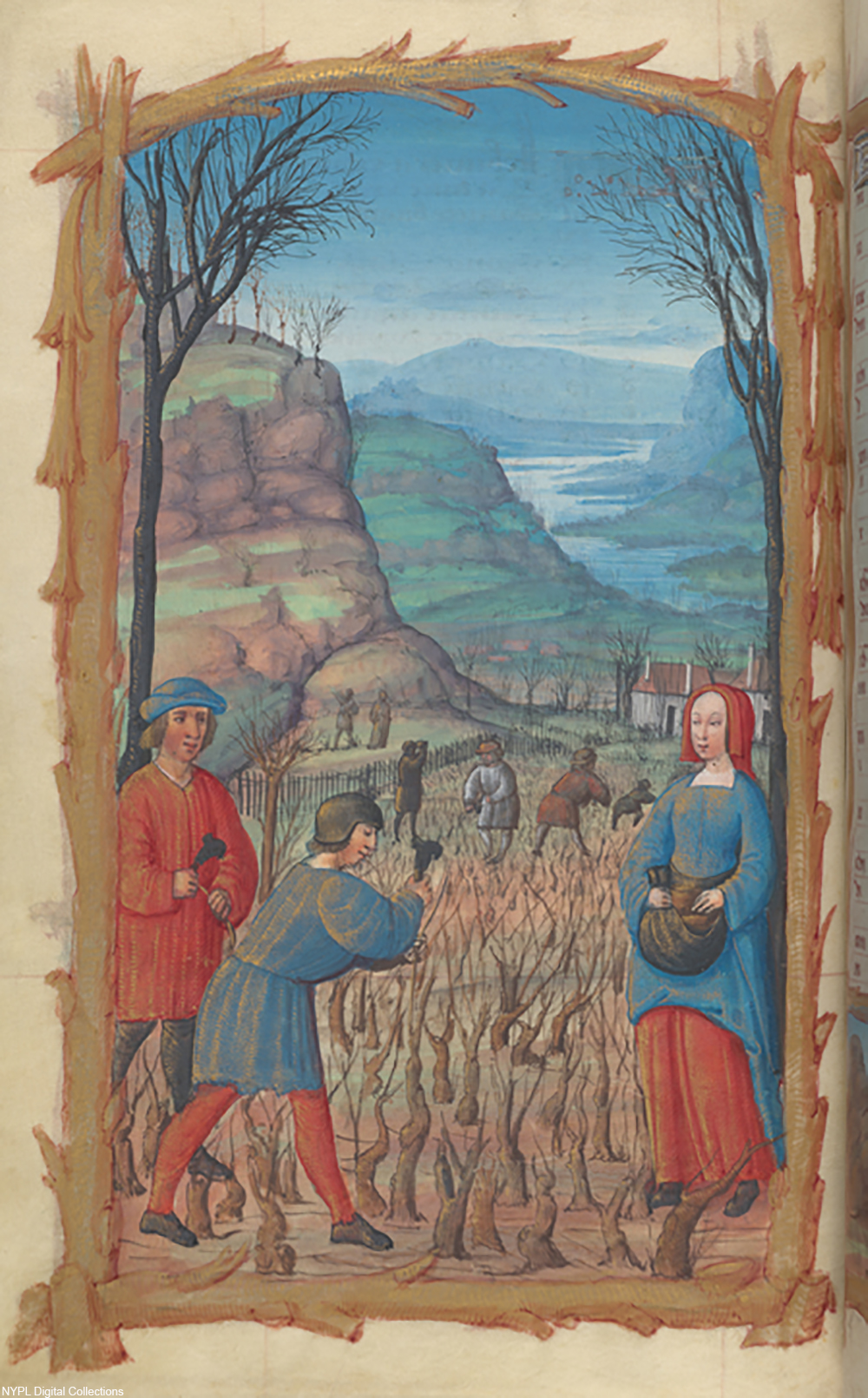