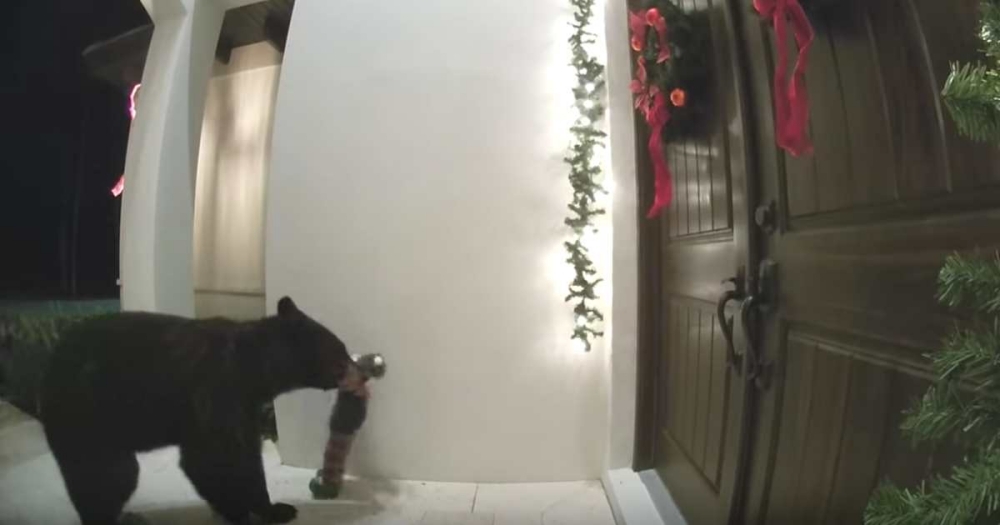 Many kinds of people can show up on your doorstep and ring your doorbell: delivery men, friends, family, salespeople, and the list goes on. But there are rarer things that happen… Sometimes someone — or something — that you would never expect shows up on your doorstep.

Sometimes that is a bear.

A family who lived in Florida was in for a little surprise when a bear showed up on their doorstep. It was around Christmas time so there were a bunch of decorations on their front door and all around it. The bear knocked some over though, and it is pretty hilarious.

The whole moment was captured on a security camera outside of their home, so luckily the rest of the world gets to see this funny moment.

When the family uploaded the video online for everyone else to see, it naturally went viral. It is up to over 540k views today, along with almost 9k likes and thousands of comments. We can’t get enough of this crazy bear content, clearly.

The bear did more than just appear on their doorstep, though. At one point, he even managed to ring their doorbell. Yep, a real live, living and breathing bear rang the doorbell at this family’s home.

Before he rings the doorbell, he is obviously curious to see if there are any bear-appropriate treats hidden in the Christmas decorations on the porch. So he sniffs them out and ends up messing some of them up. Some get knocked over…But it is kind of cute.

Despite them falling over, he continues to check them out and see if there is anything fun hidden inside. Spoiler alert: there is not.

After realizing there are no treats outside, he makes his way over to the door to ring the bell. Perhaps there are treats inside, he is probably thinking. Maybe the family will let me, a scary bear, into their home and feed me many cookies and fish.

This is the best part, though. After the bear rings the family’s doorbell, the family yells, “bear, go away!” Sure, it seems a little bit harsh on the surface but let’s be honest, what kind of family would let a potentially dangerous bear into their home? No one is trying to get eaten today, especially not during the holidays!

After the family makes a fairly lazy attempt to shoo the bear away, his response is absolutely priceless.

You would not expect a bear to listen so well, yet here we are. After the family yells at him to go away, you know what he does? He literally just goes away.

Yep, the bear listened. We don’t know if he was a trained animal in a past life, but it was pretty impressive how he casually walked away immediately after. It is impressive how well-behaved this one is!

We wonder what would have happened if they let him in! Watch the hilarious clip below for yourself.