Man Eats $120,000 Banana Art And Says He Would’ve Done It Earlier But He Wasn’t Hungry

This performance artist has quite the story to tell and we can hardly believe it ourselves. The concept of a $120,000 banana is a lot to fathom. Most of us will never make that much in a year, let alone have that kind of money to blow on something that would normally cost a pittance. Art Basel was the site of this ‘performance’ and we have so many follow up questions.

For starters, what would possess someone to pay that much for a banana in the first place? Secondly, how could they possibly feel good about it? Let’s put all of that to the side for a moment, though. David Datuna found a banana that had been taped to a wall by Maurizio Cattelan. This Italian artist probably did not expect his work to be treated this way. 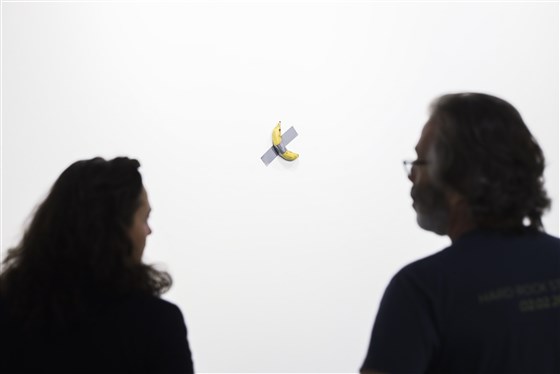 The banana was known as “Comedian” and had already been sold to multiple collectors. We wish we had that kind of money to blow on such frivolous things….must be nice! According to David, this was not just a PR stunt. There was a method to the madness. “I decided in the morning,” he said when asked about when he elected to consume this man’s artwork.

He went on to say that he would have eaten it sooner if he had been hungrier. We cannot stop laughing at his audacity. We wonder how the artist themselves feels about his actions. They are probably furious but the best part of all is that this is a fairly easy art project to replicate. It is not like the original artist would struggle to retrace their steps or anything.

Believe it or not, David did not mean to disrespect the works of Maurizio Cattelan. He says that he is a big fan! We would not have shown our appreciation in the same way but there is nothing wrong with this. You would have to be lacking a sense of humor not to see anything funny about this. It is the type of story that seems fake until you actually take the time to click on it.