In the 1880s in the Ozarks, the law was a suggestion at best. The chaos of the Civil War and Reconstruction had not only left families and communities divided on the stance of slavery, but also left towns in ruin and had led to mass migrations of people. In Taney County, Missouri, the problem of outlaws running rampant was particularly bad.

Many of the most notorious thieves and criminals at the time had relatives in the sheriff’s department or other connections with the law which meant that they were never sought and tried for their crimes. But, one group sought to change that and restore order to their area. 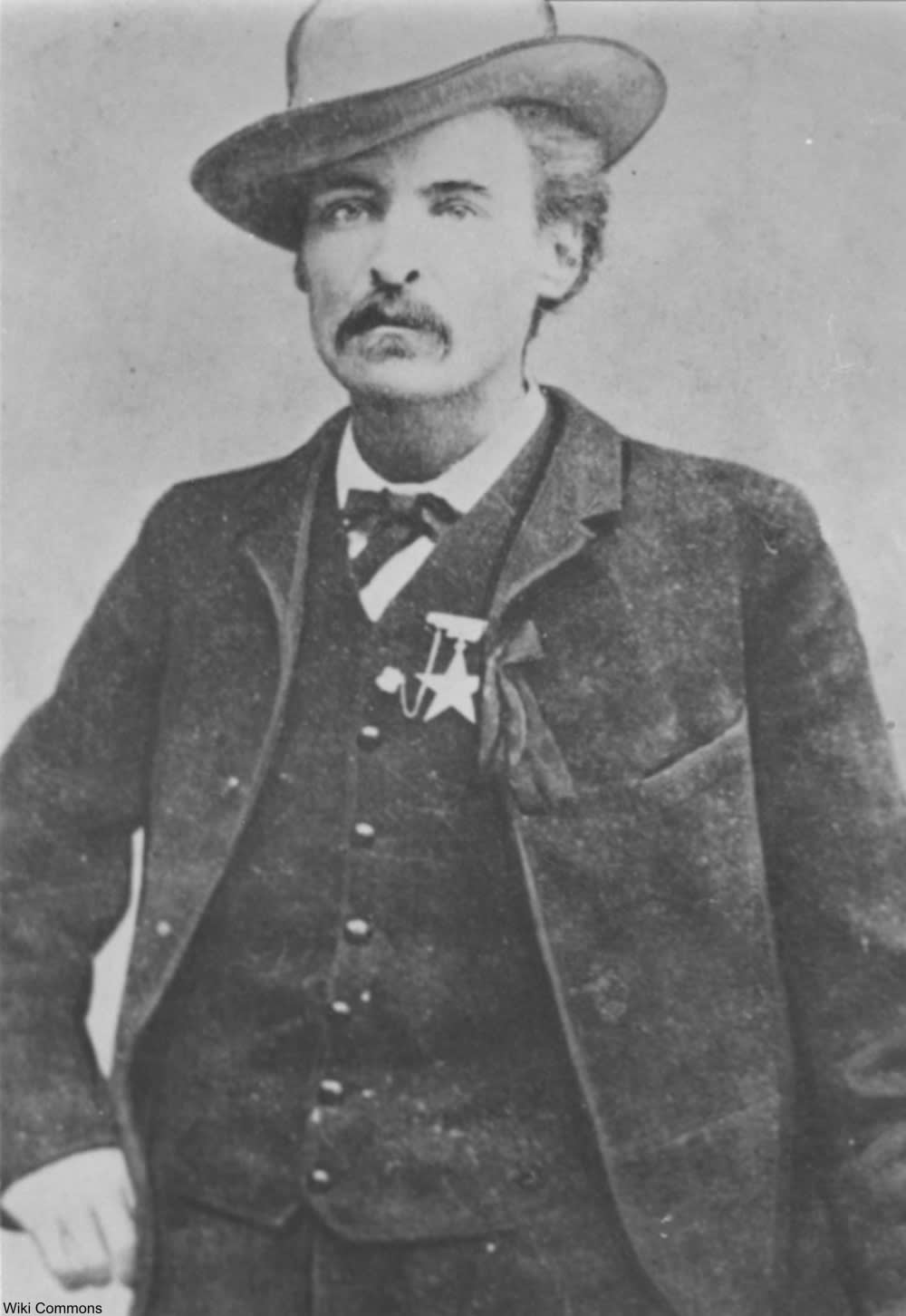 “Big Jim” Courtright was a crooked sheriff in Texas who was feared for his gunslinging skills and often squeezed the local businessmen for protection money. He was killed in a shootout in 1887. Via/ Wiki Commons

A Solution for Rampant Crime

Many of the disorganized crime rings following the Civil War had gotten their start with Confederate guerrillas who had simply run amok during and after the war. Taney County had around 40 murders between 1865 and 1885, none of which had any convictions associated with them. For a rural area that was a huge number of unjust deaths. And for law enforcement to have no concern whatsoever in finding those responsible was truly frightening to the residents.

Violence became a way of life for some in the area, while for others it was a constant threat. To reduce crime, a group of concerned men joined together in secret to discuss what they were going to do about the lawlessness and unpunished criminals who were sheltered by their connections to the law. They decided to inflict their own brand of justice, while wearing masks so no one would know who they were.

The masks were pretty terrifying, even by today’s standards! They were black with the eyes and mouth outlined in orange. The masks were made from old pillowcases which had the corners sewn or tied off like floppy devil horns from the medieval era. 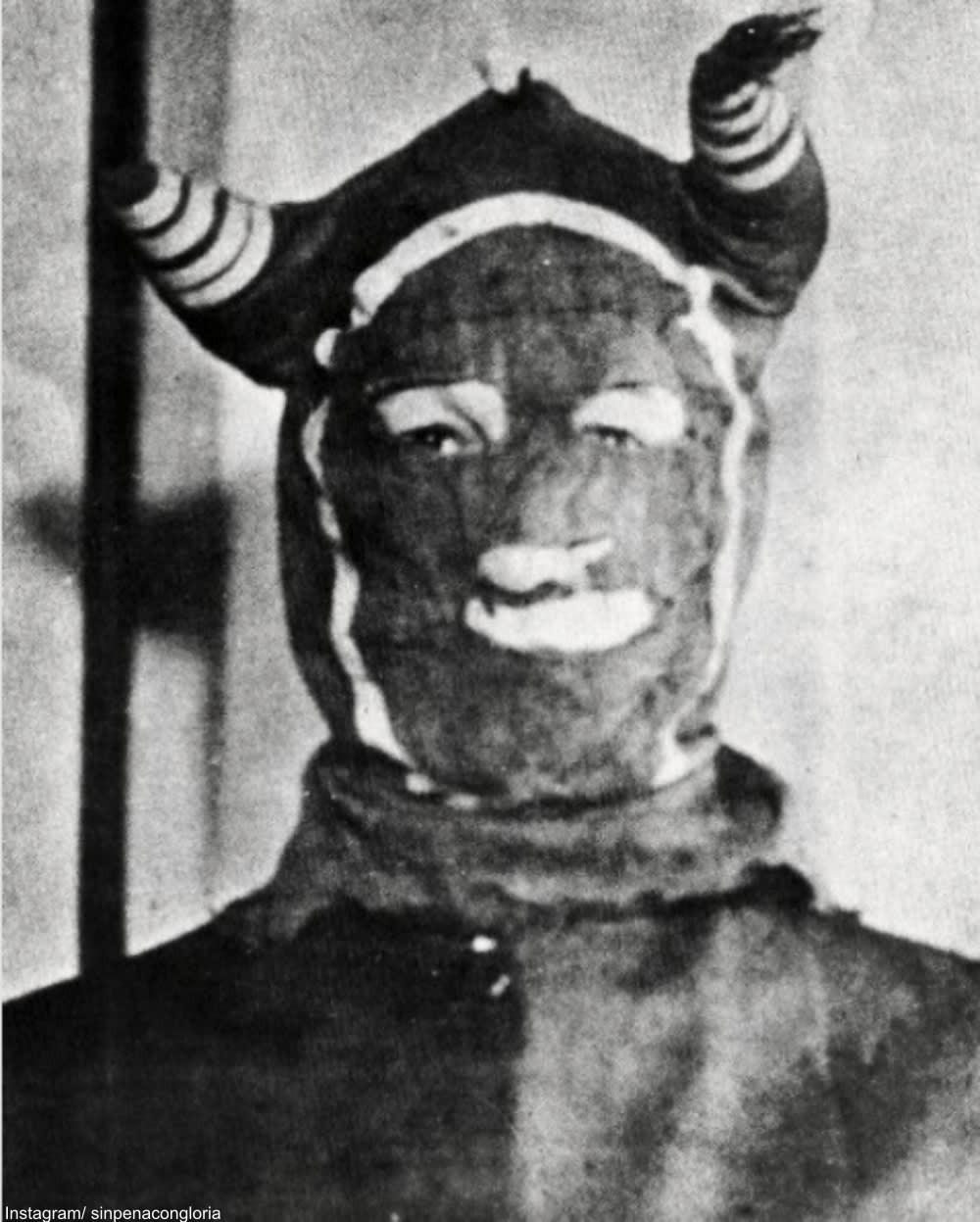 They called themselves the Bald Knobbers, so-named after the small hills in the area that were bald knobs. 13 men formed the Committee for Law and Order and first met on Snapp’s Bald to discuss the restoration of law to their land. They would whip thieves, coming for them in the night. They would murder the murders. According to legend the first man they went after was a pig thief whose house they surrounded, eventually beating him black and blue while telling him that they knew he’d been stealing hogs. 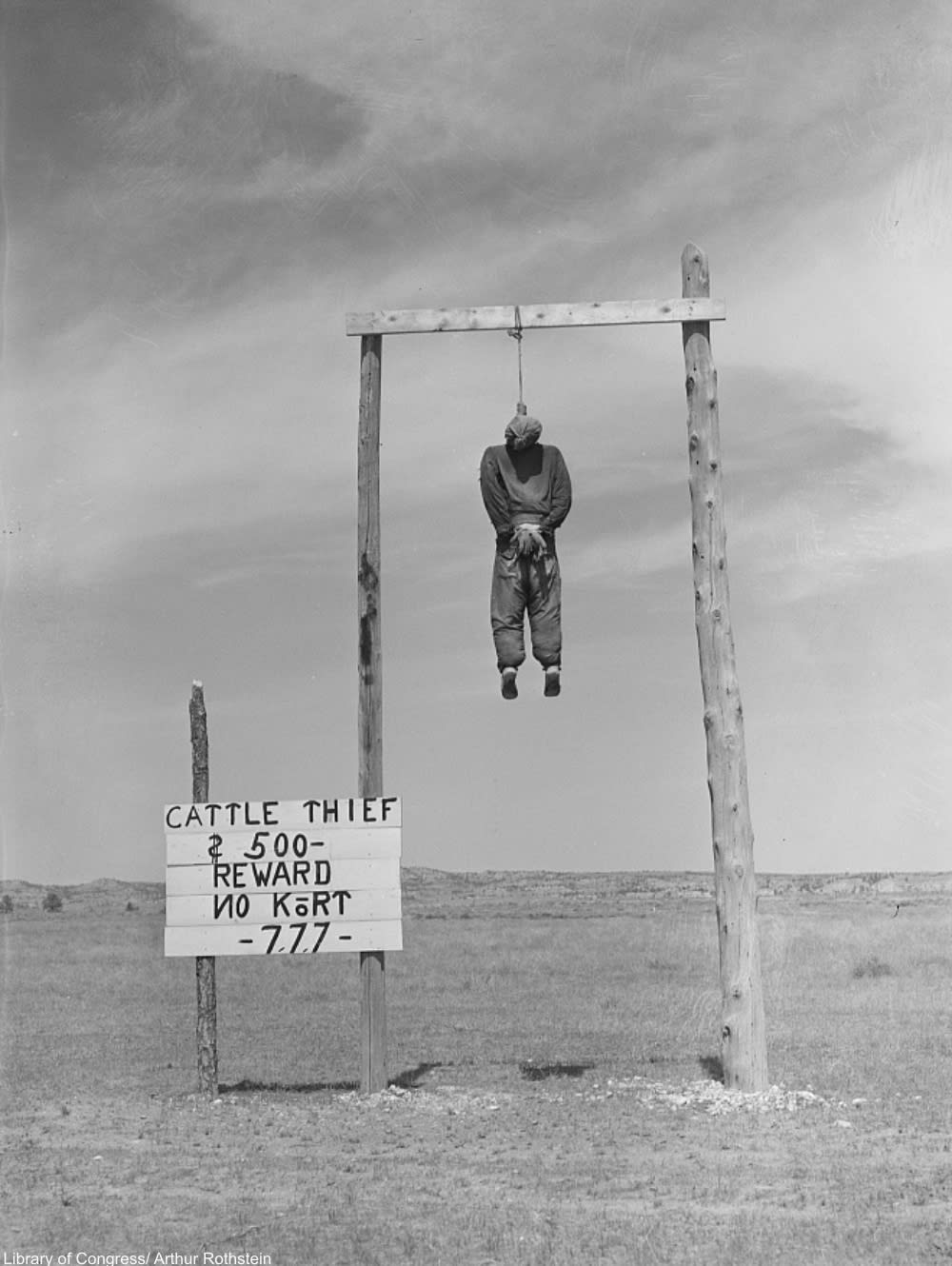 Cattle thief hung in effigy in Montana, 1930s. The numbers on the sign refer to the vigilantes of Montana around the close of the Civil War. Via/ Library of Congress

What Are the Limits of Justice?

The Bald Knobbers were quickly tested when one of their own was shot in his store by two of the most notorious outlaws in the area: the Taylor Brothers. They criminals had been found not guilty at trial before, mainly due to a relative who sat on the bench. This time, however, the Taylors were taken from the jail and hanged by the Bald Knobbers who had left a note that more justice was to follow.

While this particular band of Bald Knobbers never killed anyone else, they relied on their reputation to intimidate anyone who they found suspicious or problematic in any way. The group, which had always been staunchly anti-Confederate, now garnered hatred from locals who not only identified as Confederates, but who also felt preyed upon by both the criminals and the vigilantes. Many of the Bald Knobbers were also Prohibitionists and would smash up saloons on a whim despite the fact that they were perfectly legal. 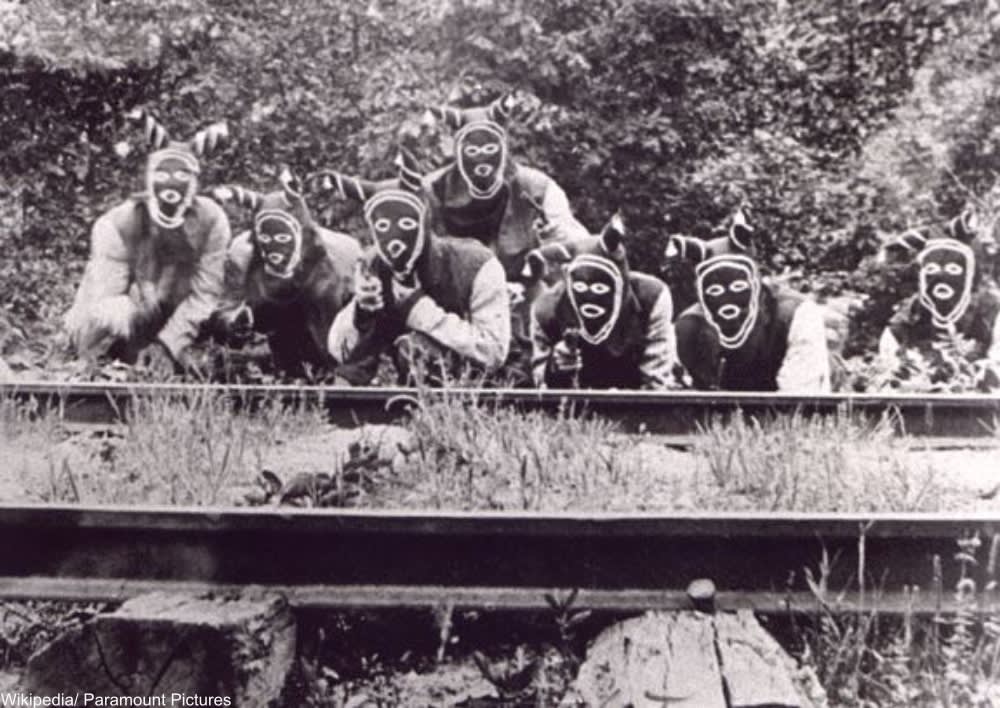 Scene from the 1919 film Shepherd of the Hills which depicts bald knobber style men. Via/ Wikipedia

Another common tactic used by the Bald Knobbers was to leave a bundle of sticks on the suspect’s front porch. It served not only as a warning that they had their eyes on you, but it was a meter. The number of sticks represented the number of days you had to change the offending behavior. Talk about intimidation!

At the same time there were many nearby counties with the same problems of crime. Bald Knobbers “chieftain” Nat Kinney offered to help set up sister chapters of the Bald Knobbers group. These neighboring bands showed even less restraint than the original group, further giving Bald Knobbers a bad name.

The original chapter grew well beyond the 13 men they started with to eventually include 42 men. The Christian County group numbered at a whopping 87 members! Nearby Douglas County had a comparatively small band at only 20 men.

The End of an Era

Eventually the Taney County group was peacefully disbanded, although their leader was later murdered in cold blood. Neighboring Christian County Bald Knobbers had committed the murders of William Edens and Charles Greene, had later turned themselves in, and been hanged for their crimes in the late 1880s, giving what many anit-Bald Knobbers thought really was justice. 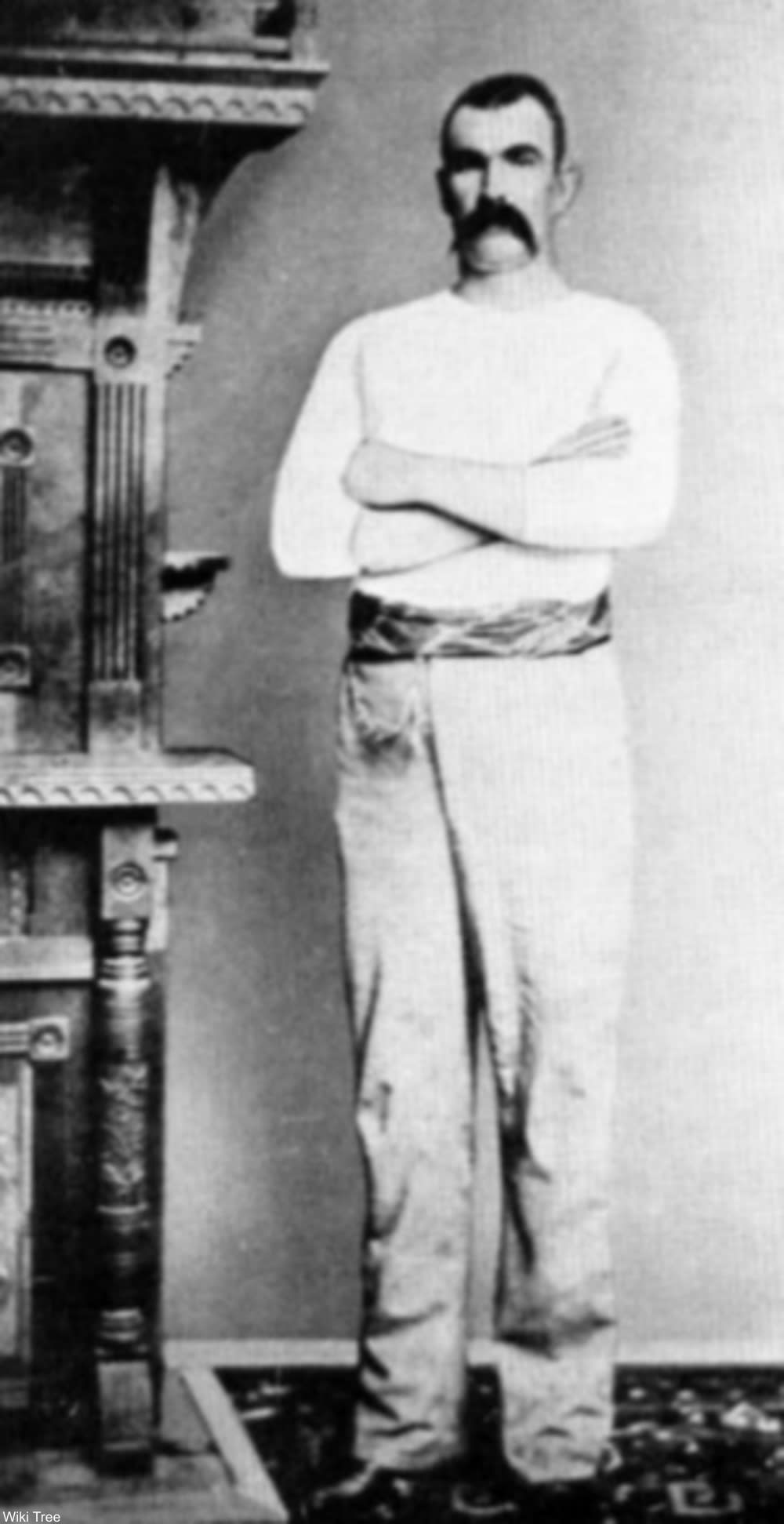 Nat Kinney, the very tall first chieftain of the Tany Bald Knobbers who was killed in 1888. The shooter, Billy Miles, was acquitted. Via/ Wiki Tree

You never hear much about these masked bands of vigilantes these days, but there were many such groups or individuals around the same who were fighting for justice in their own terrifying ways to counteract the lawlessness of frontier life. By some accounts, select Bald Knobbers even thought they had done nothing wrong and would surely suffer no death on account of their good intentions.

The calling card of Black Bart: Click “Next Page” below!