The day that Julie Akins stepped into a derelict abandoned school bus in Ashland, Oregon, she knew instantly she’d never be the same.

Julie had been living among people experiencing homelessness researching for a book she is writing called “One Paycheck Away.” She’d already seen the things we’d expect: the feelings of hopelessness, the realization that there are far more people living on the streets than she’d first thought, and the knowledge that for some Americans homelessness is one or two missed rent checks away. What she didn’t expect was the number of families who didn’t have a place to call home. 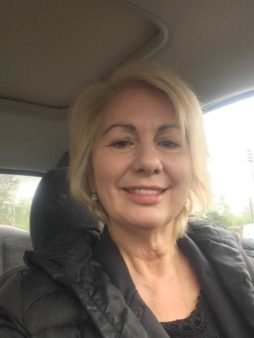 One day Julie noticed an old blue school bus parked in one of the many forgotten parking lots where homeless people congregate. Curious, she knocked on the door and was greeted by a startling sight: a family with seven children lived inside the bus. Instead of seats, the bus was strewn with mattresses and bins full of clothes. While it was clear they were making do with the meager shelter they could find, there was no running water, no toilet, and no kitchen.

Julie was inspired. An idea began to form in her brain: what if she could get old buses donated, rip out their insides and create clean, comfortable and mobile homes for families with nowhere else to go? 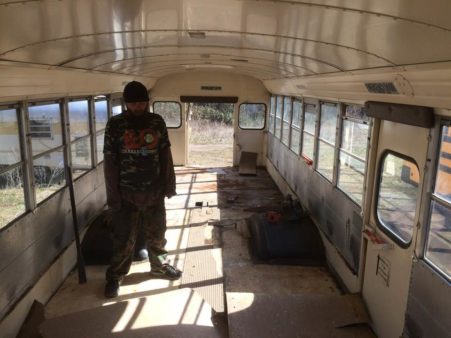 “They want to have a place to live that is their own, that’s safe — and they want to be mobile, so they can get better jobs,” she explained.

Julie launched herself into a new venture called Vehicles for Change. Within nine months she’d already secured funding and enlisted Alex Daniell, an engineer who has worked on building tiny homes for the homeless in Eugene, Oregon for several years. Nine months into the project they completed their first “skoolie,” which was promptly inhabited by the Flood family. 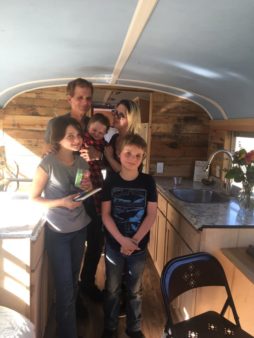 David Flood is a highly educated man who quite simply had fallen on hard times. He was working as a substitute teacher and finishing a master’s degree when his wife became ill and had to stop working. Soon their landlord’s generosity ran out, and the family of five found themselves out on the streets.

“What people don’t understand, is that even if someone has a little bit of income, they can end up on the street — even families,” David said. The family lived in a tent throughout the summer months, but with winter approaching they knew they had to find another solution. That’s when David’s wife spotted Julie on the news talking about Vehicles for Changes, and within a month they moved into their new bright yellow school bus. 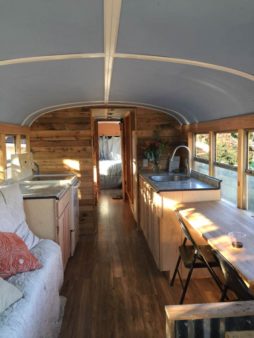 The Floods say that having the stability has changed their lives for the better. “It made the little money we had stronger,” he said. “It took the stress off of our lives. It allows us to breathe for a moment.”

The family loved making the space their own, planting an organic vegetable garden outside and allowing the kids to paint the ceilings above their beds. Just knowing that they have a safe, clean space to sleep has made a lasting impact on the children. “On the outside, it looks very small — and just like a plain school bus,” said David’s son. “But it opens up on the inside. On the inside, it’s a mansion.” 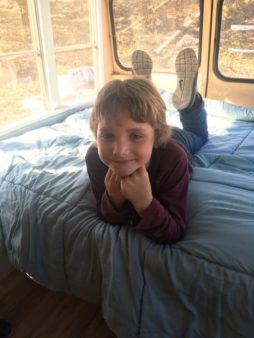 The Floods are just one success story, and Julie is hoping that with the continued donations of people who hear about the project there can be many more in the future. They’re currently hoping to create one “skoolie” every year, “But if I could raise more money and awareness, there’s no reason why we can’t make a lot more,” said Julie. She hopes that someday they can commit to creating five new homes each year.

Long term, Alex hopes the buses will serve as a template for others all over the country. “The end product results from keeping a family from breaking apart,” he said. “My experience with the homeless is: if the families don’t get split apart, and the kids stay in school, they don’t end up on the street. Once somebody’s been on the street for a while, it’s hard to find their way back in.” 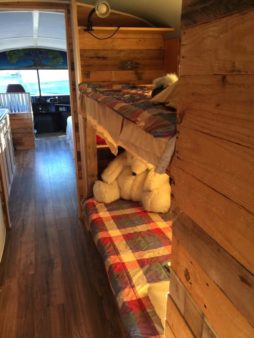 As difficult as it is to ponder the “what ifs” in life, we should all remember that when we lie down in our beds each night there are thousands of people, including children, who don’t have a place to call home. It’s a comfort knowing that people like Julie are out there working to make homelessness a thing of the past. Let’s all do what we can to join her on her mission to help children grow up with a place to call home.

Please share this story to spread the word about Vehicles for Change.