You Can Now Download High-Res Versions of Audubon’s Prints

His name graces parks in most every state. His artwork changed the way people saw the natural world. And, his life’s work helped to form the conservation movement in the U.S. Now, the famous color prints from John Audubon are available online in high resolution for free download from the Audubon Society’s website. 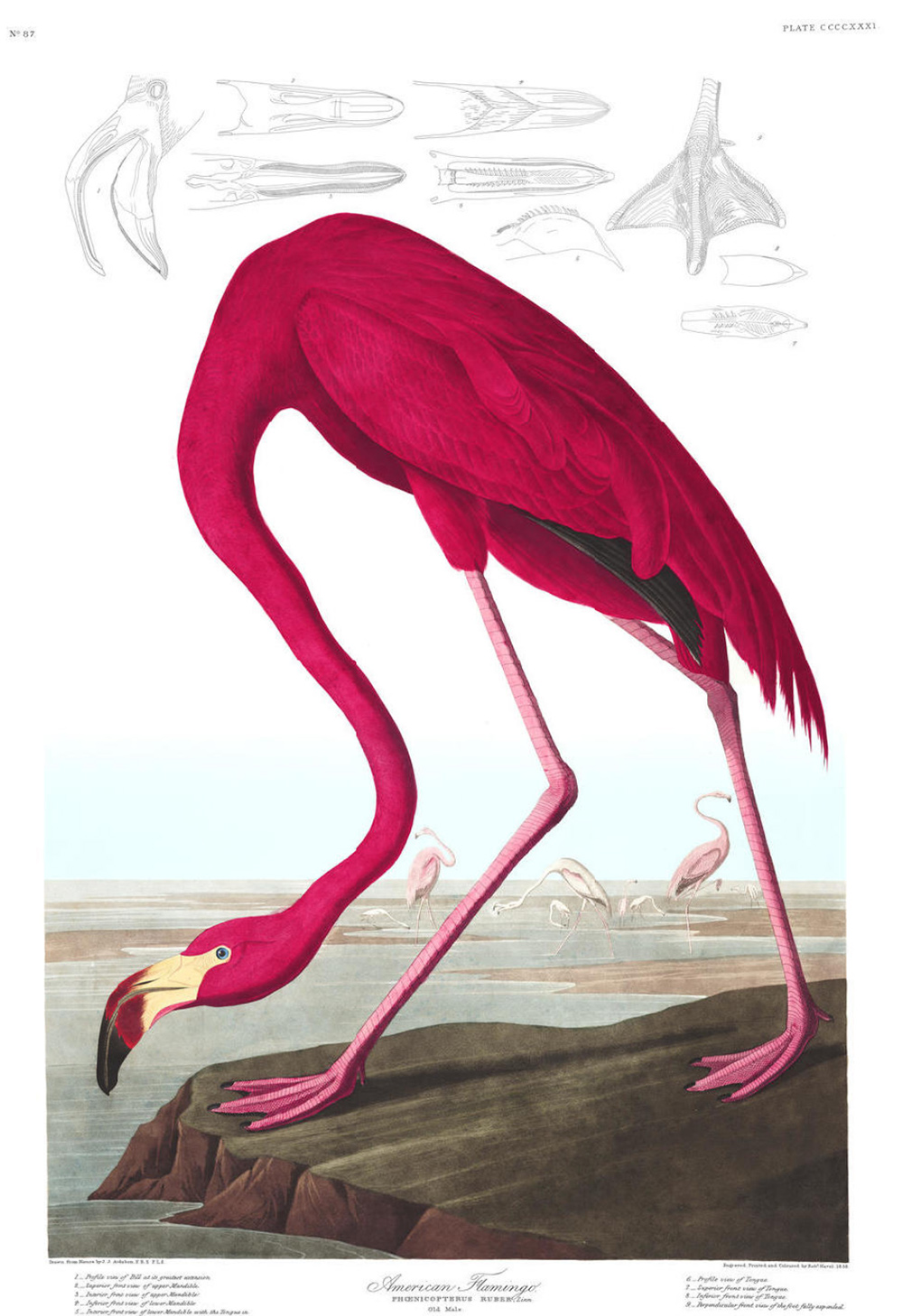 American flamingo shown in an elegant pose. Via/ Audubon Society

The Man, the Myth, The Legend

John James Audubon was born in the then-French colony of Haiti in 1785. After the death of his mother, a servant, he moved to Pennsylvania to a farm named Mill Grove with his sea-captain father and sister in 1789, before the family moved again to France, his father’s home country. 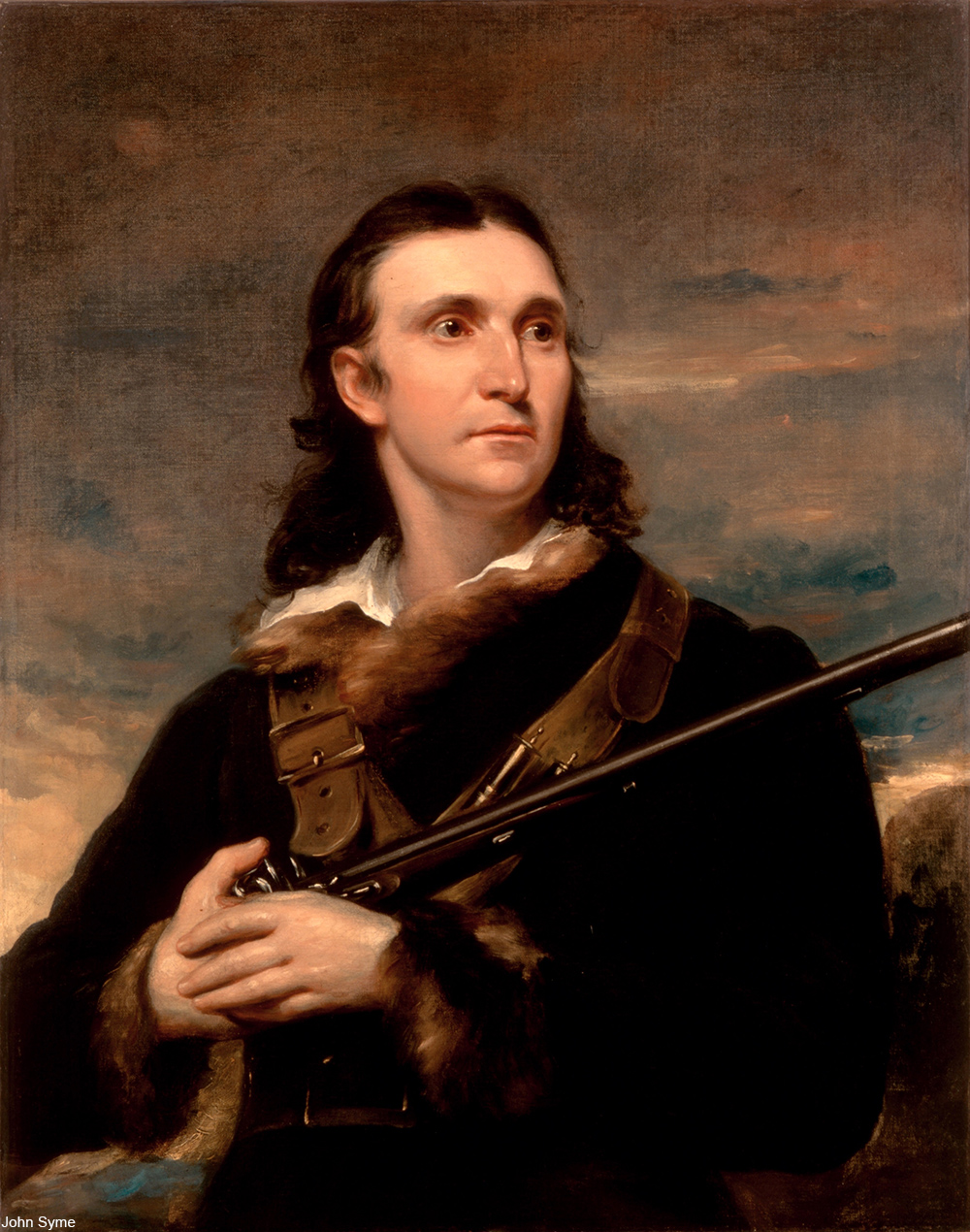 John Audubon as painted by John Syme. Via/ Wiki Commons

While overseas Audubon studied math, art, fencing, and observed birds as his hobby. In 1803 he was tasked to oversee the family’s Mill Grove plantation for a time and in 1822 began taking lessons in oil painting. Having been in debt, Audubon had the idea to create his now-famous works on birds in order to become financially solvent.

He found support from a printer in England in the 1820s having avidly painted all the birds of America that he could hunt, using watercolors to depict them in all their splendor. He then used taxidermy skills he had acquired while living briefly in Cincinnati to pose the specimens in dramatic, lifelike postures.

The Birds of America

Created between 1827 and 1839, the detailed color prints were some of the most detailed natural drawings to have ever been assembled, all featuring American bird species no less. In the early 1800s the U.S. was still a relatively mysterious territory to established academic and scientific communities. Audubon’s book, The Birds of America, identified 25 previously unknown species of American birds. 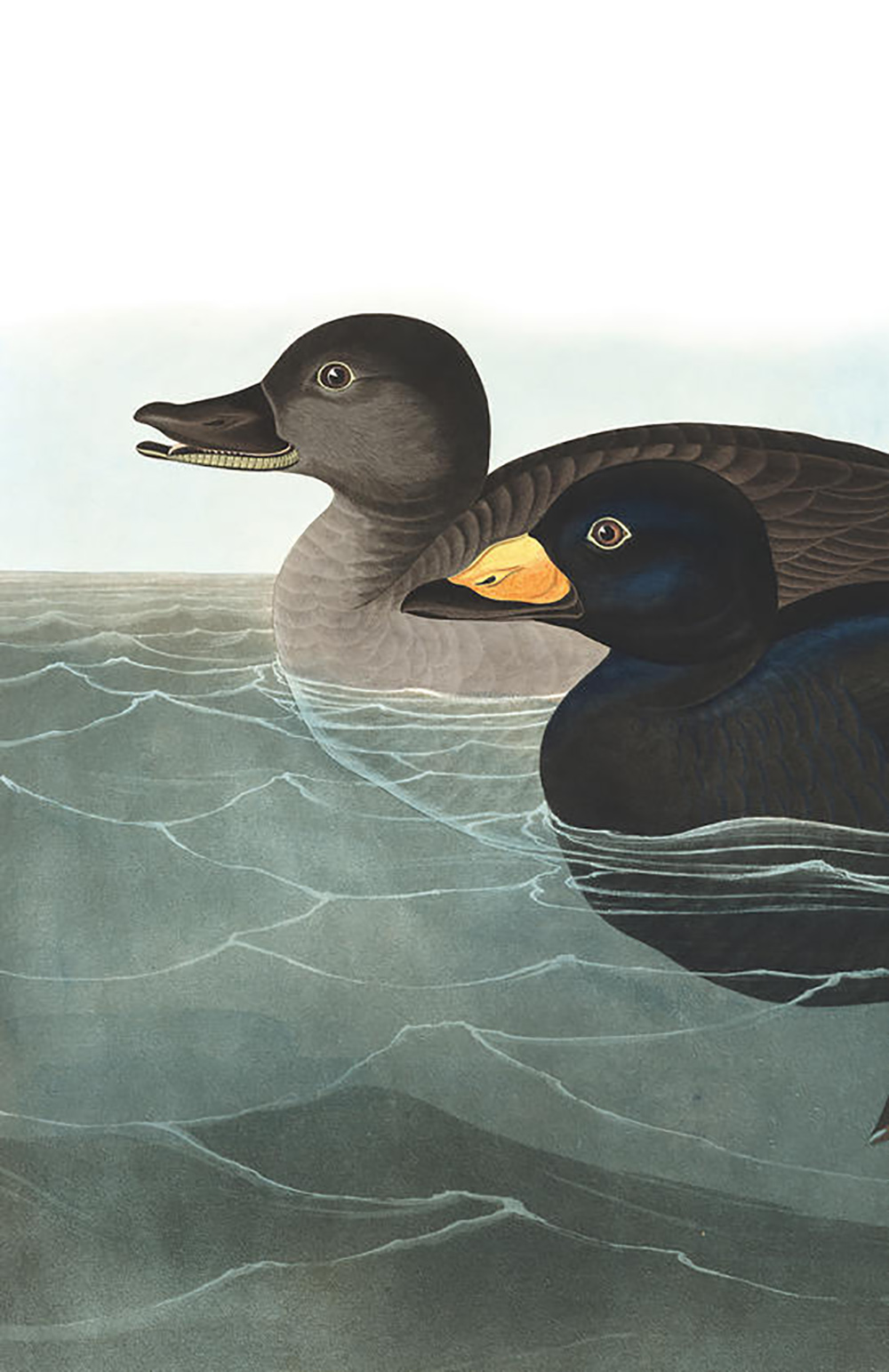 At the time Audubon was writing his first book many of the Western states had yet to be formed or even explored fully, the first national park (Yellowstone) was nearly 50 years away, and the average person had extremely limited experience in traveling.

This made it all the more special when the book was released and people could experience a small portion of America’s natural splendor through his artwork. 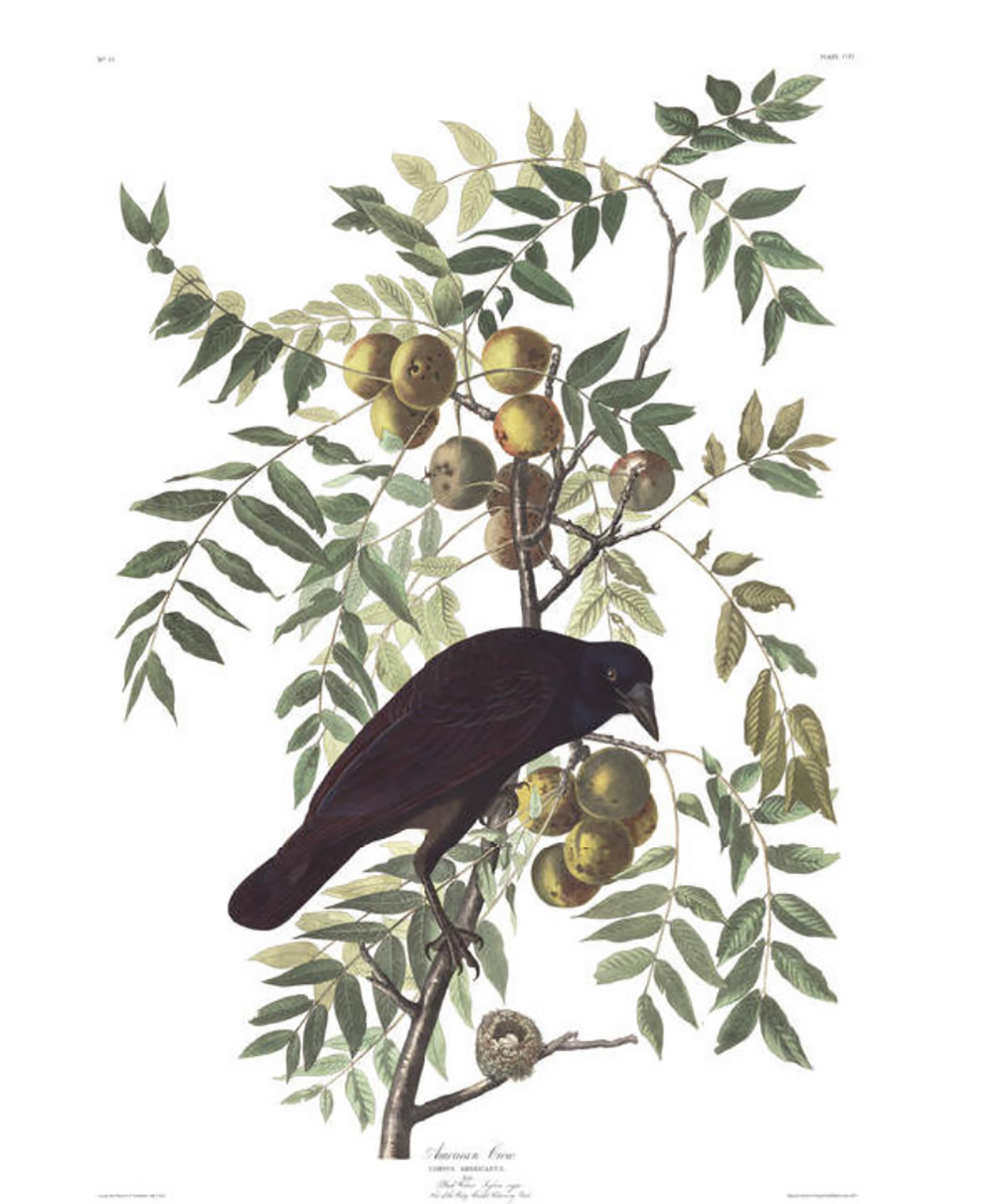 The American crow in lively detail. Via/ Audubon Society

The technologies of color printing at the time were not very advanced, certainly not enough to achieve the spectacular color that nature held for ornithologists observing birds in the wild. Instead of settling for lesser depictions of wildlife, Audubon had each figure in the large format “double elephant” size books hand-tinted for the best effect. Each page of this edition was a whopping 39.5 by 26.5 inches in dimension. 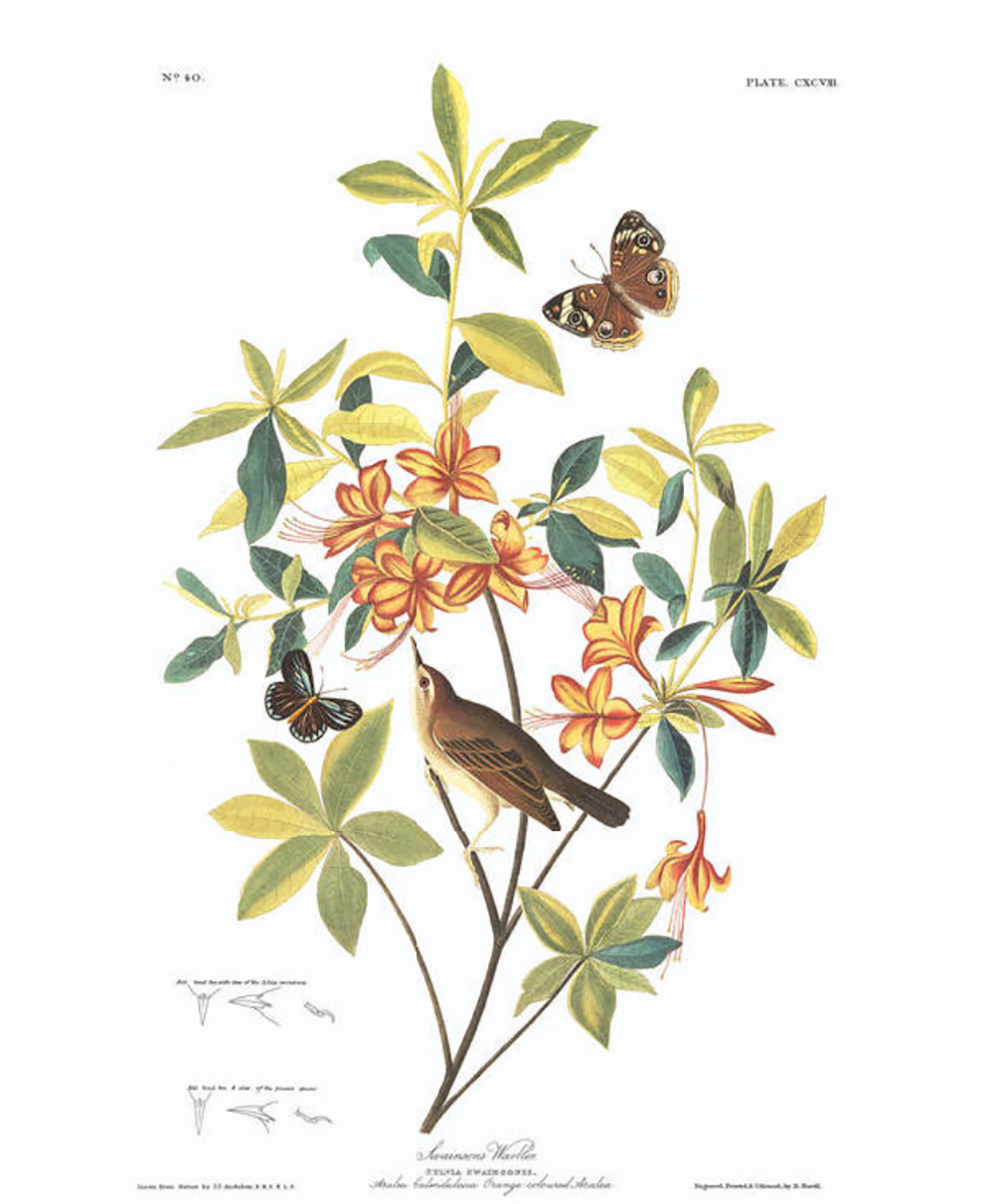 The elegant leaves and flowers behind the brown headed worm eating warble could almost be a wallpaper design. Via/ Audubon Society 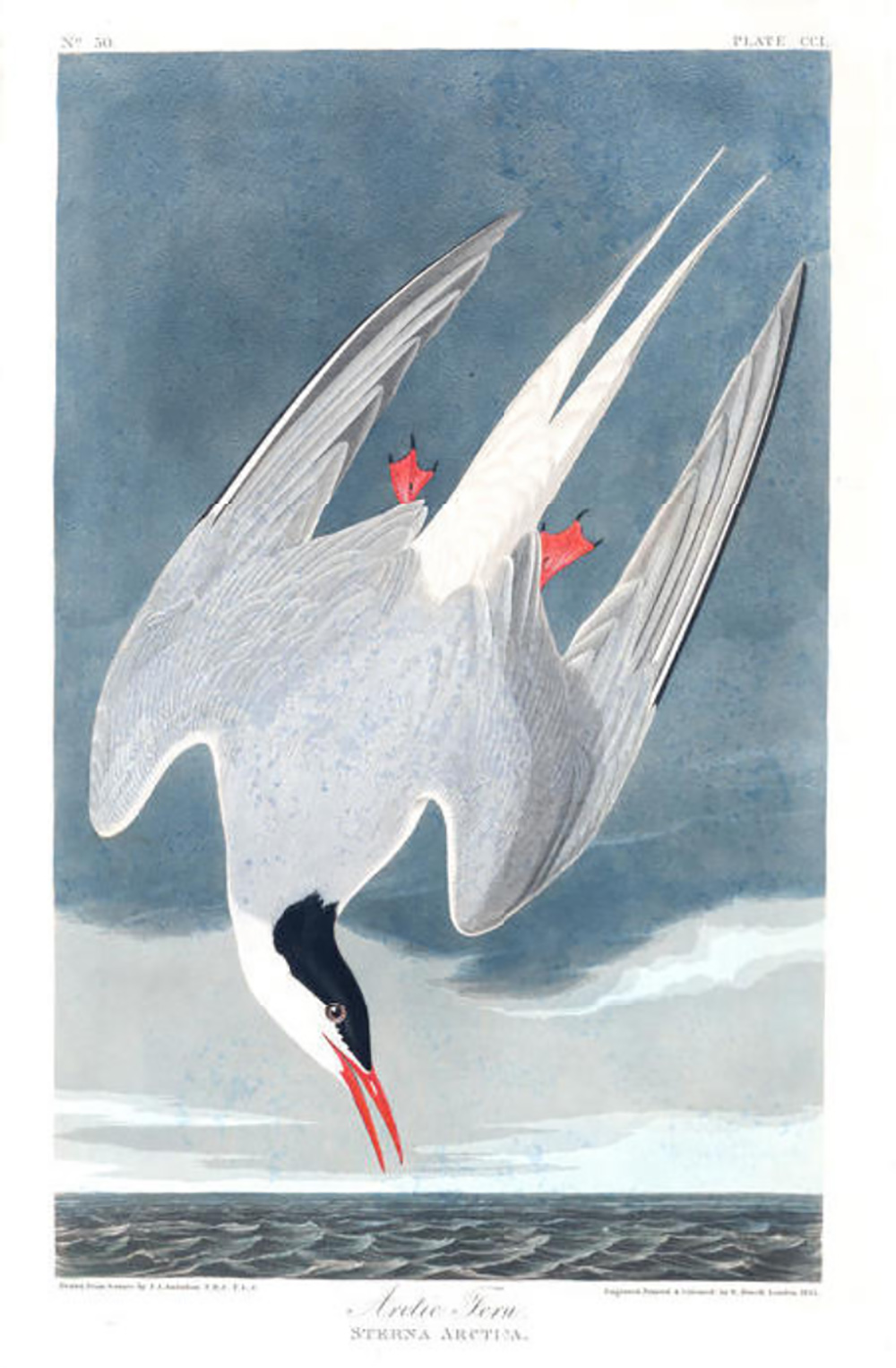 The arctic turn taking a nose dive to catch prey. Via/ Audubon Society

This meant that the prints not only far surpassed other books of the era, it was the first time that many people were able to see the features and colors of so many animals all at once. 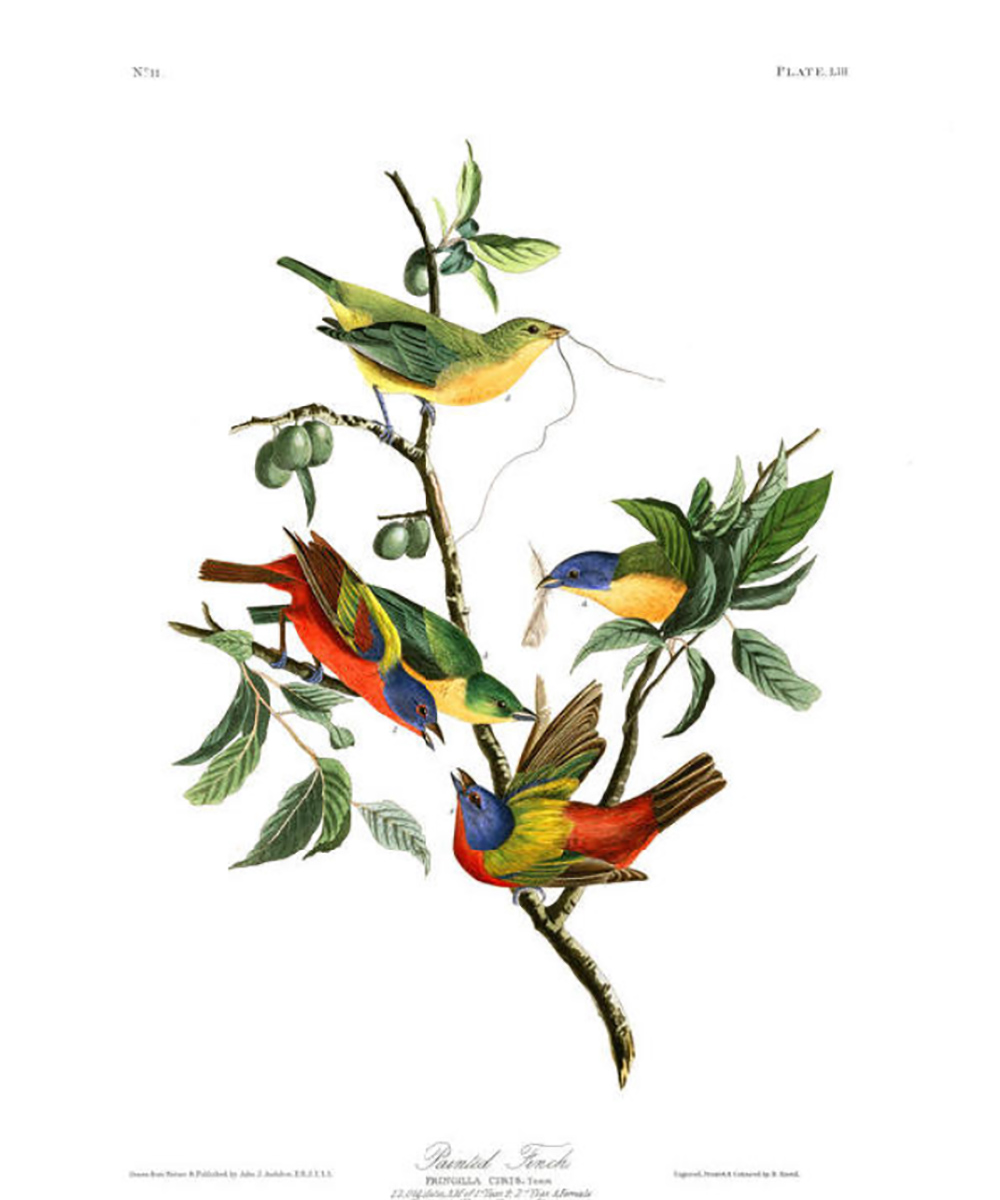 For these reasons, the prints have been held in high esteem ever since, with copies of his engravings gracing the walls of many homes in the 20th century, having been made easier to print by new technologies.

Now the Audubon Society has made available digital copies of this famed work on their site. If you grew up with these prints in your home or if you just love beautiful prints, then this could be your lucky day. 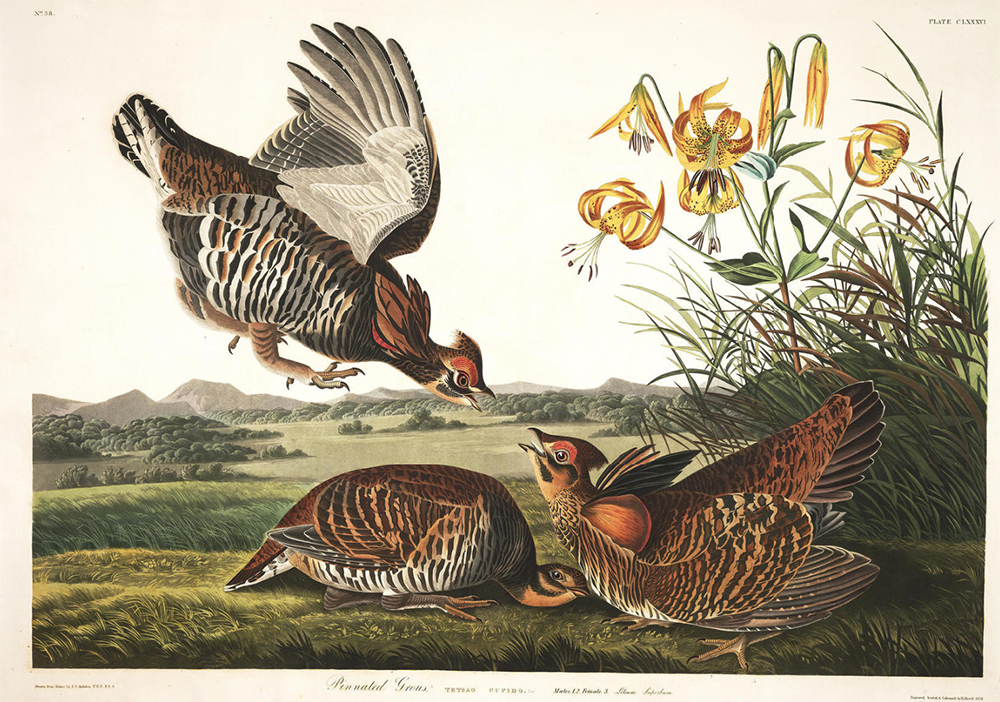 Later works of John Audubon included further volumes on the study of North American birds and some several books on quadrupeds as well. However, his first and most glorious book remains the tome he is most known for.

The legacy he left behind is far greater than he probably could have ever imagined. His paintings of birds, rendered in rare form, are to this day among the finest naturalist drawings of birds to have ever been made. 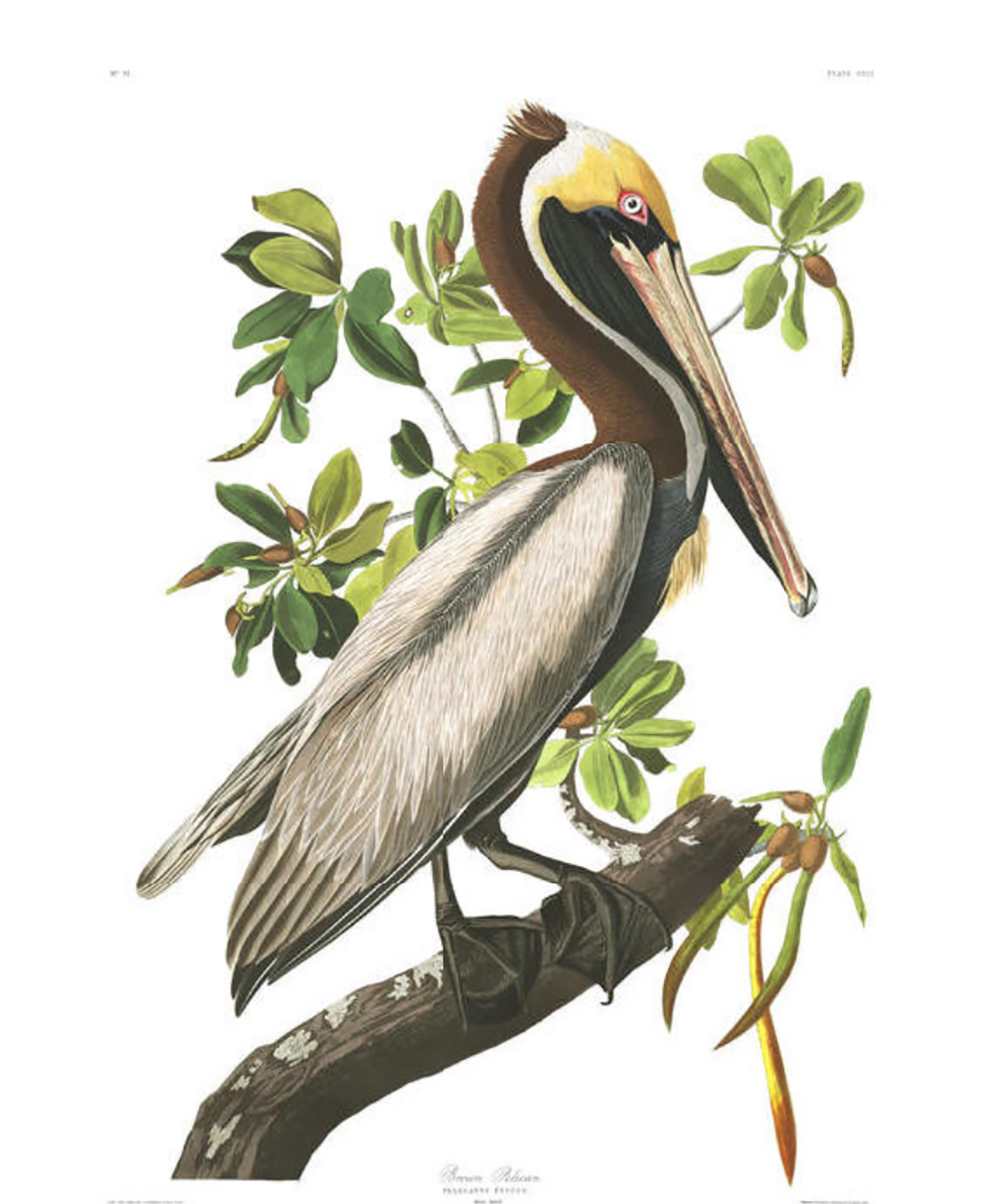 The state bird of Louisiana, the brown pelican. Via/ Audubon Society

There are 435 brilliant color images from The Birds of America on the Audubon Society website, each with the accompanying text from the book. Even if you don’t fancy printing these gorgeous paintings, the site also features a zoom function on the image which allows you to see the tiny details of each bird, which you can sort alphabetically or by state birds!

For this reason, the images function today as really wonderful pieces of art and a tribute to a man who changed the world of bird-watching forever.