It may not be April Fool’s Day, but with the holidays coming up you are going to have a ton of Amazon boxes. Rather than just recycling them, you could do what this woman did and prank your husband!

While there are some people who don’t understand the difference between a good prank and just being a monster, there are others who are quite skilled. Take the wife in this story, for instance. She came up with a prank that will have you yelling with laughter, we guarantee it. 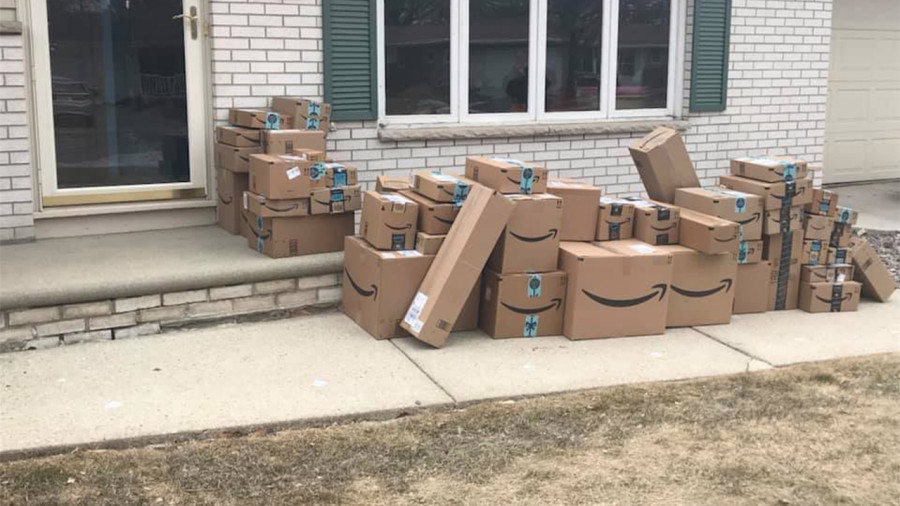 Maureen Pritchard spent months putting this plan together. It took a great deal of planning on her part but it was definitely worth it if you ask her. She’s an Amazon addict who spends lots of time ordering various items from the site. Like most Amazon addicts, she does not believe that she has a problem. To pull off this prank, she even enlisted the rest of her family.

She decided to hide the boxes from all of her purchases while collecting additional boxes from her sisters and her parents. By the time April Fool’s Day rolled around, she had enough boxes to pull off the mother of all Amazon pranks. All of the boxes were lined up in front of the home so that her husband would think that each of them had shown up that same day.

She wanted him to think that she had gotten a bit too “spend-happy” on the website. From the looks of it, Rob had no clue what was going on when he arrived back at home. He did not know that it was April Fool’s Day and reacted accordingly. He was not thrilled about all of the money he assumed that his wife had been spending before he finally he was the victim of a great prank.

Maureen posted the prank on her Facebook and the likes and shares came rolling in immediately. Who doesn’t appreciate an incredible prank like this one? The video of Rob’s reaction to the pile of boxes is one of the most priceless things that we have seen in a long while. How funny in this prank? Would you kill your significant other if they pulled such a stunt? Be sure to share a way to see the reactions of others!