When shopping in the produce section of your grocery store, you’re probably used to seeing red tomatoes and green cucumbers, yellow bananas and purple eggplants.

Just like animals — which have changed a lot since humans started breeding them for food — fruits and vegetables have undergone drastic transformations since humans became agriculturally focused.

For thousands of years, humans were hunters and gatherers, which means they hunted animals and gathered wild plants for sustenance. As communities grew larger and more established, however, humans learned that it was more efficient to centralize the cultivation of food.

The earliest traces of cultivation seem to come from Southeast Asia, around 10,000 B.C., where gardens of large peas, beans, cucumbers, and water chestnuts seem to have been grown. Chances are that you wouldn’t recognize them, though!

Centuries of selective breeding and genetic engineering have changed the way fruits and vegetables grow, look, and even taste.

Scroll through the images below to see side-by-side comparisons of wild produce versus what we see in the store today!

In the wild, carrots are very thin, forked root vegetables, with a white or yellowish color.

Since human domestication, carrots have transformed into large, tasty orange roots that are an annual winter crop.

We think of peaches as big, fuzzy stone fruits that are positively dripping with juice, but it wasn’t always that way.

Peaches used to be small, cherry-like fruits with little flesh. They were first domesticated around 4,000 B.C. by the ancient Chinese and tasted earthy and slightly salty, “like a lentil” according to some experts.

Throughout their history, eggplants have come in a wide array of shapes and colors, such as white, blue, purple, and yellow.

They also used to have spines where the plant’s stem connects to the flowers.

After centuries of selective breeding, you have to look hard to find an eggplant that’s not smooth, oblong, and uniformly black.

First cultivated by humans at around 8,000 B.C., the banana is an early example of domesticated plants.

We’re used to a thick yellow peel full of sweet, creamy fruit with tiny seeds but this is completely different from how bananas grew before human modification.

As you can see from this 17th-century painting by Giovanni Stanchi (left), watermelons from just a few centuries ago looked strikingly different from modern melons.

Rather than the juicy, pink-fleshed, seedless varieties we enjoy in the summer time, ancient watermelons had far less juicy areas and seeds were abundant. It’s only a long period of human breeding that turned it into the red flesh fruit we know today. 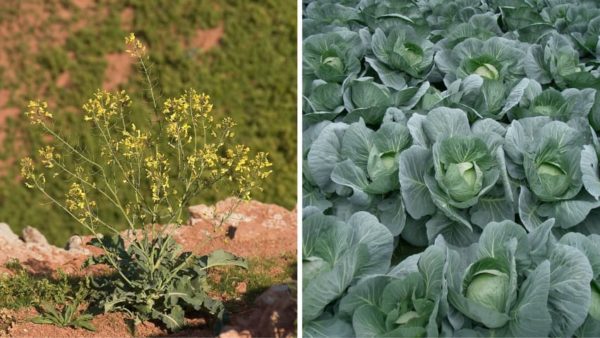 Cabbage, like its relatives broccoli and kale, is a cultivar of one ancient species, Brassica oleracea, originally a wild mustard plant that is now often referred to as wild cabbage.

Food Insight reports: “Some of the Brassica oleracea cabbages had a mutation for longer, curlier leaves, and these were bred together to produce kale.

“Some cabbages with larger flower buds were bred together to produce broccoli and cauliflower.

It’s hard to imagine tomatoes as anything other than the plump, juicy vegetable that grows on bushes in my garden, but that’s not the way they started out!

Ancient tomatoes were much smaller and darker, resembling a berry more than the apple-shaped food we know today.

Because it looked so much like a poisonous plant, the deadly nightshade, Europeans were afraid to eat the tomato for many years. 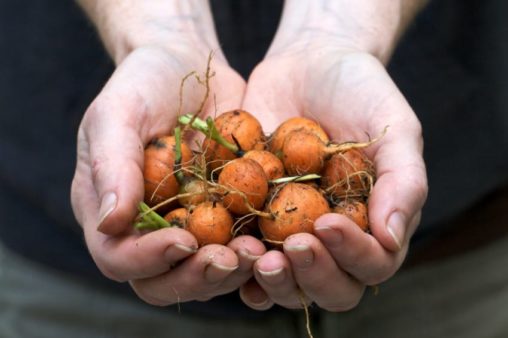 These days, many people are concerned about genetic modification when it comes to fruits and veggies.

On one hand, it’s important to realize that simply cultivating crops, instead of gathering them from the wild, is a form of genetic modification. Over the centuries, different varieties were cross-bred to produce stronger fruits and vegetables with more desirable tastes and appearances.

However, with recent scientific advances, the genetic modification that’s going on today is quite different. In some cases, pesticides or even the genes of animals have been introduced in an attempt to make super-breeds of certain crops. The effect of this process is still untested and unproven, considering how new it is.

We’ve yet to reach a firm conclusion about whether or not modern GMOs are safe for human consumption, other animals — like pollinators — and perhaps most importantly, the environment.

Which fruit’s or vegetable’s transformation surprised you most? Tell us in the comments.