It’s hard to believe that the shopping season has already gotten started. People are frantically trying to buy gifts for themselves or others and sometimes, it can be hard to make the right choice.

It doesn’t matter if you are shopping at a local store or online, you probably already have your eye on some electronics, toys and gift cards for the youngsters in your life. Some parents and grandparents will save all year long to make sure that Christmas is special for the family.

That is where a loving grandmother came in last year. Rather than spending all of her time trying to come up with the perfect gift, she decided to focus more on spending time with the family. Although the original Facebook post of Darlene Howell Waller was removed, it went viral first. The post showed that there was more to giving gifts than giving a toy.

As a grandmother, she wanted to provide memories of the time that her grandchildren spent with her. She went on Pinterest for some DIY ideas and came up with a package of gift cards and experiences that she called the ‘adventure box’.

A treasure chest that she purchased from a craft store was decorated and she filled it with something unusual. There were envelopes that had labels for each month of the year and inside of the envelopes was an activity for the family to do together, mostly with their ‘Nonna’.

Some of the gifts included movie tickets, a picnic, laser tag, horseback riding, a pumpkin patch outing, and the beach. Waller spoke to the ByFaithShe blog and said that a picture would be included for each monthly adventure as a keepsake.

She also included a handwritten letter to her grandchildren that explained the meaning of the box. The concept ended up going viral and people on social media saw that this was a great way to give a gift on a budget. 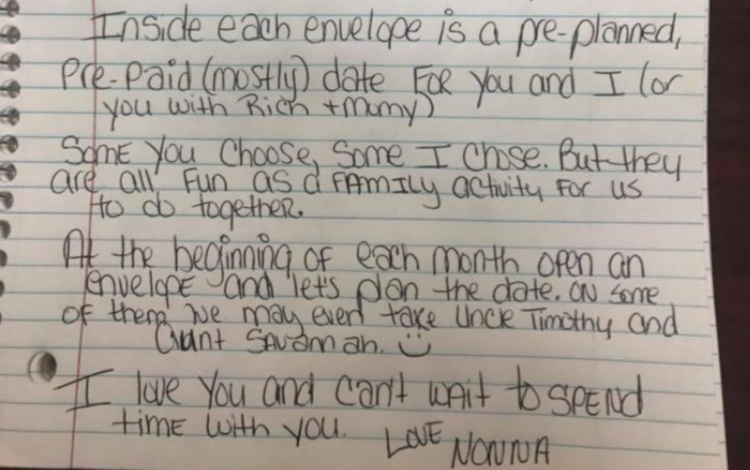 People are already making plans for going on hikes, fishing, fireworks, s’mores night or minigolf with the children. Some said that they would pay for events and activities and spread out the cost over the year. The adventure box worked in so many different ways.

Waller commented on her upbringing and emphasized the importance of time:

“If we looked back on our years, we don’t remember the gifts that were given or WHO gave them. But for me, the time spent together are some of my sweetest childhood memories. I remember the family vacations, the Saturday trips to the grocery store, the lake and camping adventures with my family, the fun we had in the treehouse that my dad built for me. But I couldn’t tell you a single gift that was a ‘thing’ that I remember receiving.”

I think this would be a great gift, regardless of whether it was for Christmas or just because you wanted to give something to someone special.