We all know that schools have changed so much, from child safety laws to computers in the classroom to the dangers of school shootings. Today’s schools seem to have little in common with the schools we knew as children. Play is now peppered with safety measures that were unheard of back in the day. Nowadays we have huge schools- nothing like the one-room schools in the early 1900s. But, one thing which was a little bit slower to change has been the curriculum.

For decades, the standards and classics seemed to translate well from one year to the next. However, at this point the lessons today’s kids get are much different than what was taught in the early days of the 20th century. Even kids who were educated in the 1950s might have had a very different education experience than kids in the 1910s. 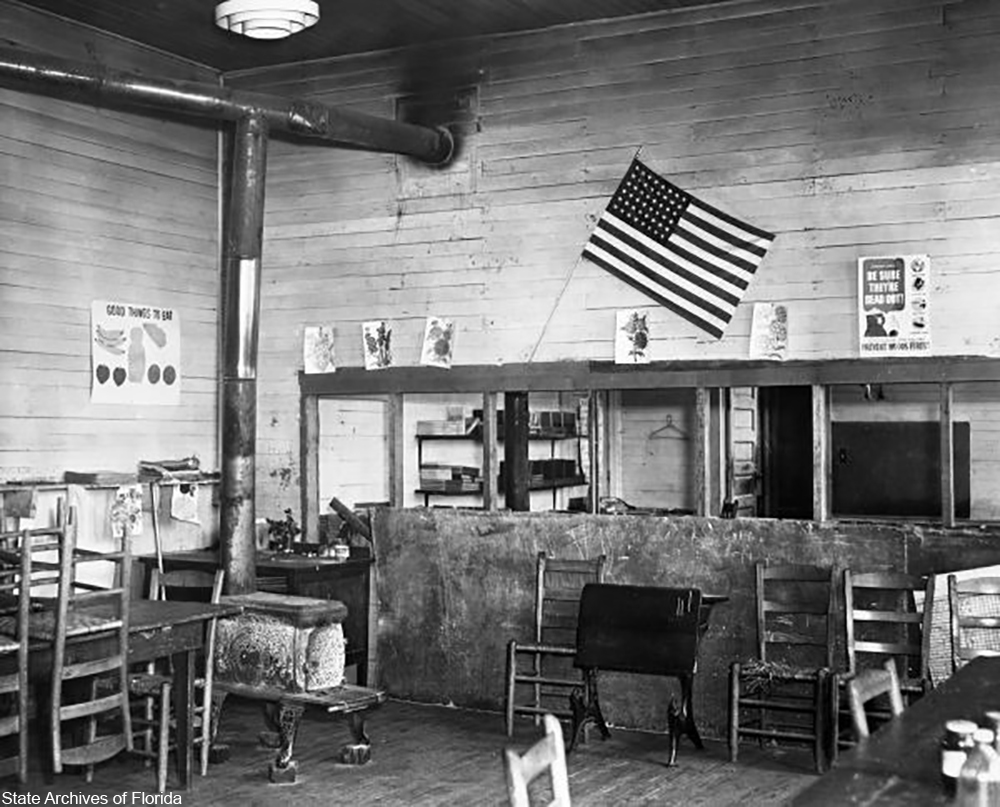 Graduation from the 8th grade, for many kids pre-World I would have been all the schooling they got. If you planned to be a laborer, tradesman, housewife, or farmer the chances are pretty good that you might not have needed more than that. Plus the lessons were much more rigorous than they are today as school kids back then would have been required to memorize a lot more information on history, civics, and basic engineering. Take the 1912 8th grade final examination test from Bullitt County, Kentucky, and see if you would have graduated. 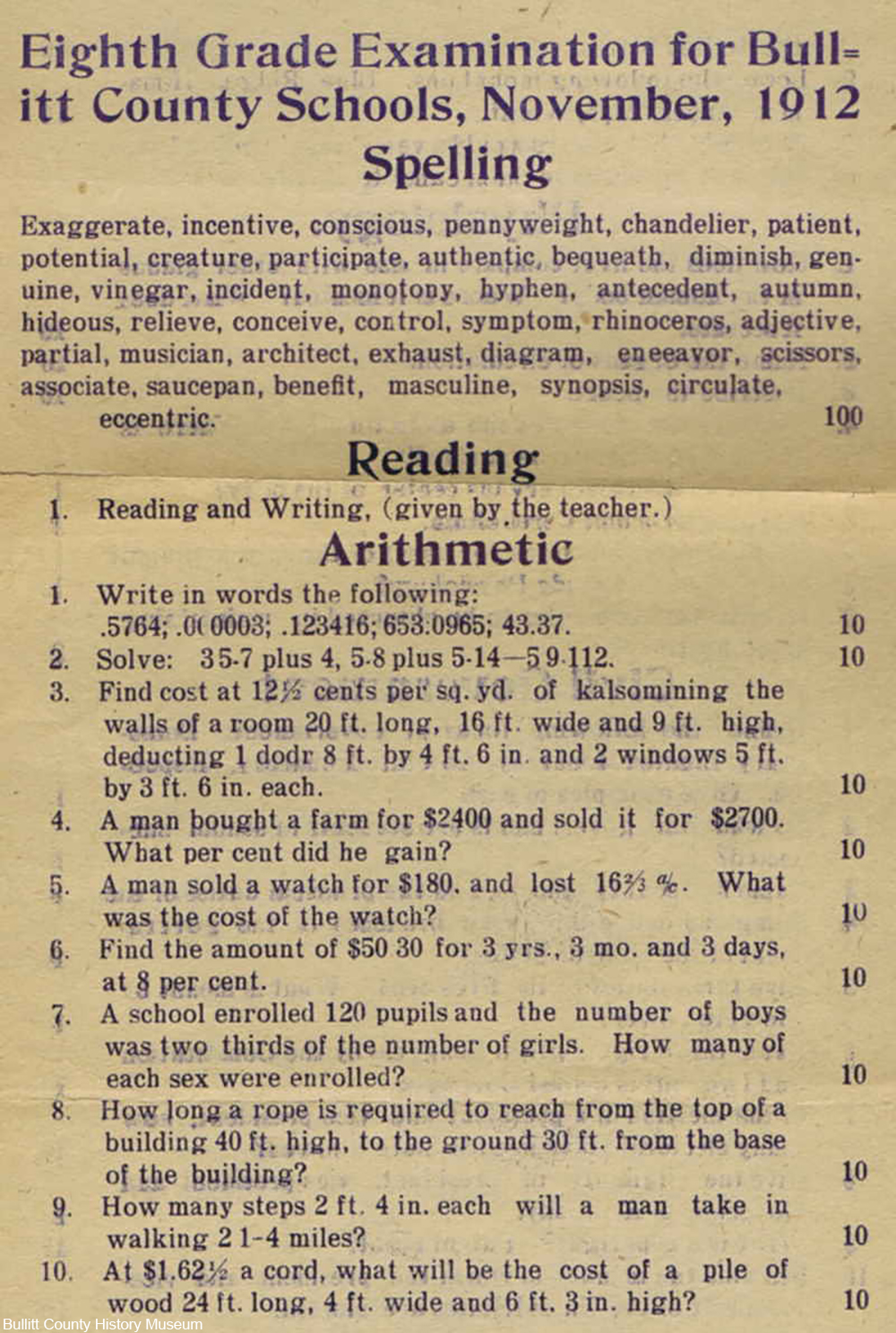 The test comes from the Bullitt County History Museum in Shepherdsville, Kentucky and is a bit blurred from the mimeograph machine. What a throwback that is!

This test took place in November as apparently there were two final exams per year. The whole community would get involved and sometimes scholarships were given for excellent work.

The first part of the exam is Spelling and would have been given orally by the teacher who would have called out the questions. The list of words to spell included antecedent, exaggerate, and rhinoceros among others. This is followed by a Reading section and we presume something would have been read aloud or written on the blackboard.

Next on the list is Arithmetic and that section includes such problems as transcribing into words large numbers and basic addition, subtraction, and division. The story problems are all short and simple, and involve shopping, small profit gains, and professions that the children were likely to engage in as adults (like school teachers and farmers). 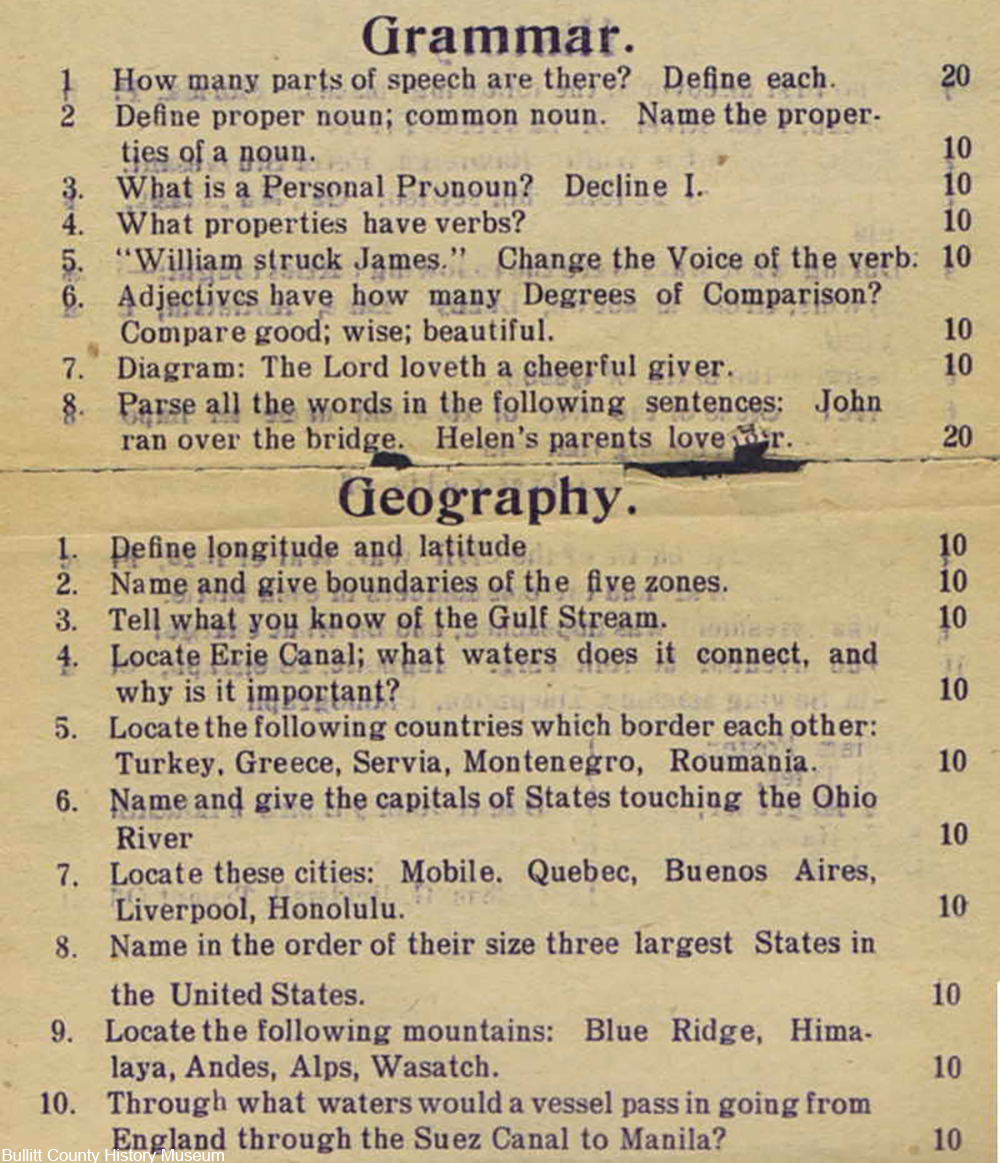 Next up is the Grammar section which tests knowledge of how to use certain types of words. An important thing which was once taught was how to diagram the different parts of a sentence: pronouns, nouns, adjectives, adverbs, verbs, preposition, conjunction, and interjections. This type of lesson is falling by the wayside in some schools since it is considered too hard, and perhaps as an obstacle for some kids to learn the parts of speech. There are several questions about how to diagram a sentence.

After Grammar comes Geography, something which students in 1912 would have had a much different grasp on. News of the day would have focused on American events and only the biggest of catastrophes from other parts of the world would have been reported on (like the sinking of the Titanic which would have happened just before this final exam was administered). American and global geography was tested here.

Students would have had to study maps and globes and memorize the locations of various countries. Of course, the globe looked quite a bit different before the World Wars. The other parts of the section include understanding the world’s waterways and what they connect, something which is not as common of a subject these days. 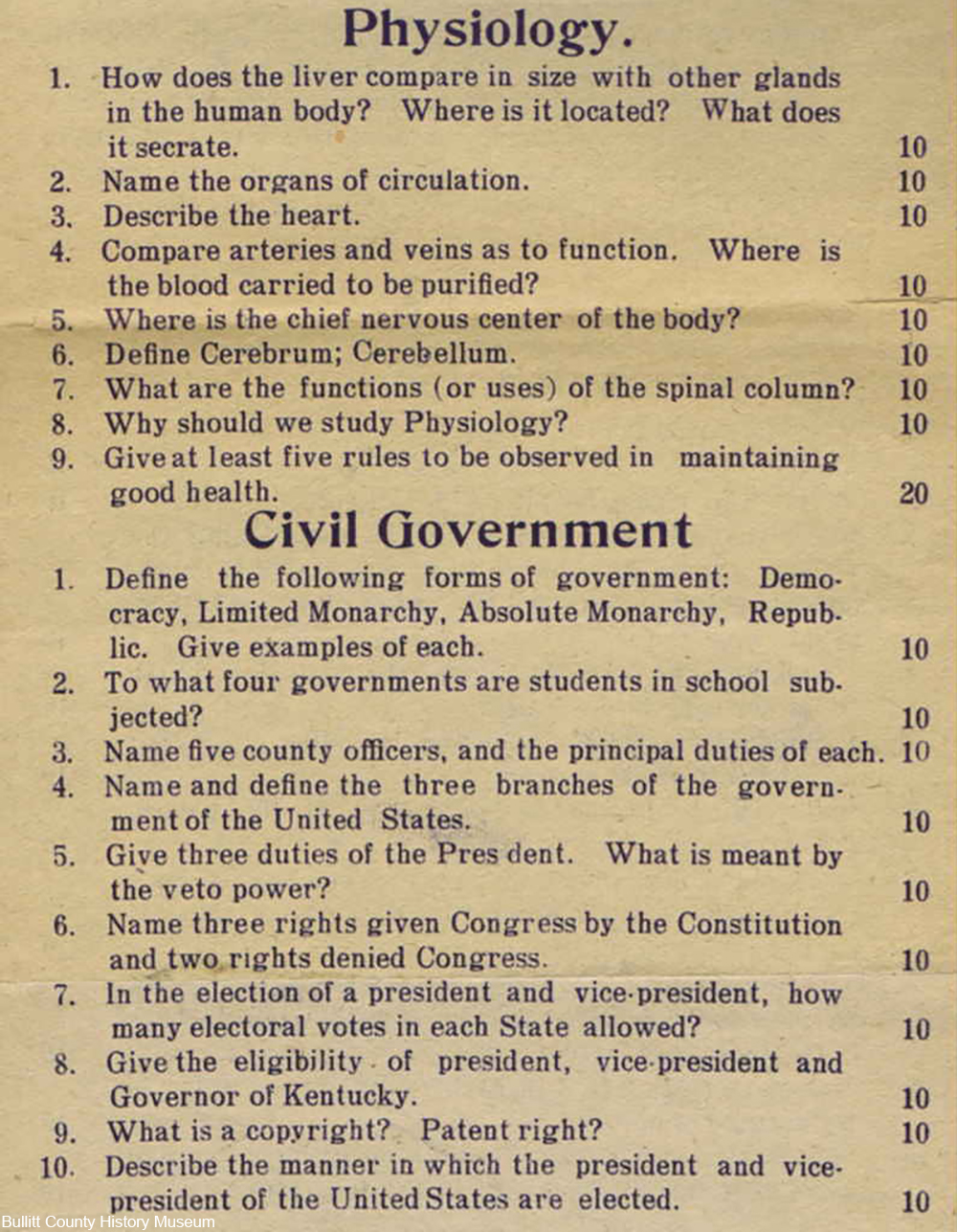 Next is Physiology which would have fallen under the category of biology in later years. The human anatomy is of key importance here and questions about the function of the liver, the heart, the brain, and maintaining health (hint: this last one is the same set of basic rules for health that all of us were taught). 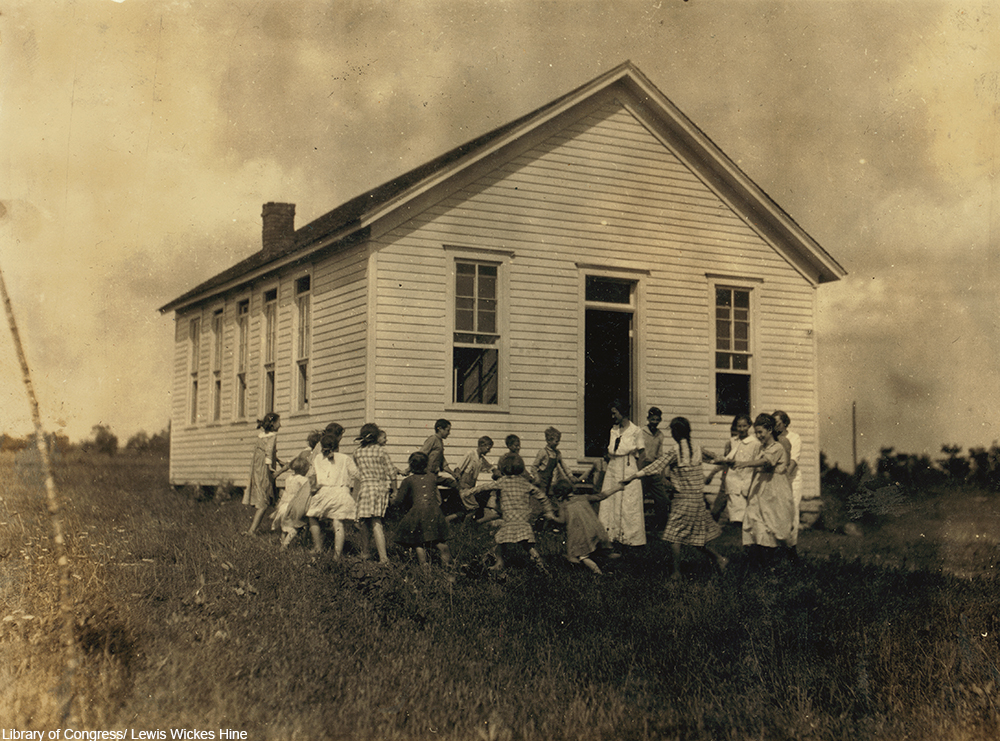 Moving on there is the Civil Government section which tests knowledge about how the U.S. government works and the role of the president and of Congress. But, this section also includes copyright law and local government as well. We’d say that covers quite a lot of material. 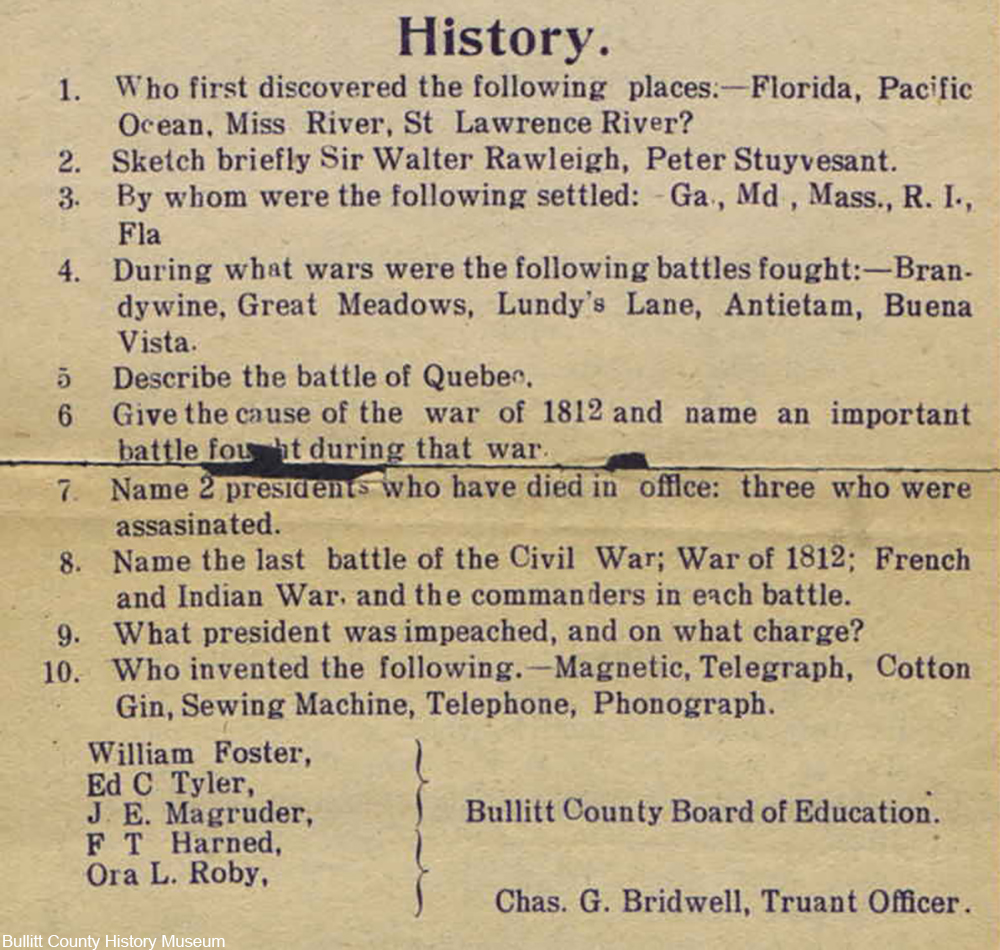 The final portion is History and this one’s a doozy. Included are questions on who founded various states (Kentucky is not among them), the Battle of Quebec, and which presidents died, were assassinated, or impeached during office. The final question is a long one: who invented the magnetic (meaning electromagnetic induction), telegraph, cotton gin, the sewing machine, the telephone and the phonograph. Phew!

Click here to see the answers and find out if you would have passed 8th grade back then!

10 things that would never be allowed in schools today: Click “Next Page” below!