Picture it: the year is 1965, flying cars are just a couple of decades away, and soon enough people will be talking to each other though their televisions and saving their films to a website. Sounds totally plausible, right? Well, one artist imagines what advertisements for some of our most-trafficked social media websites might have looked like had they been around in the 1950s and 1960s and the results are pretty interesting. 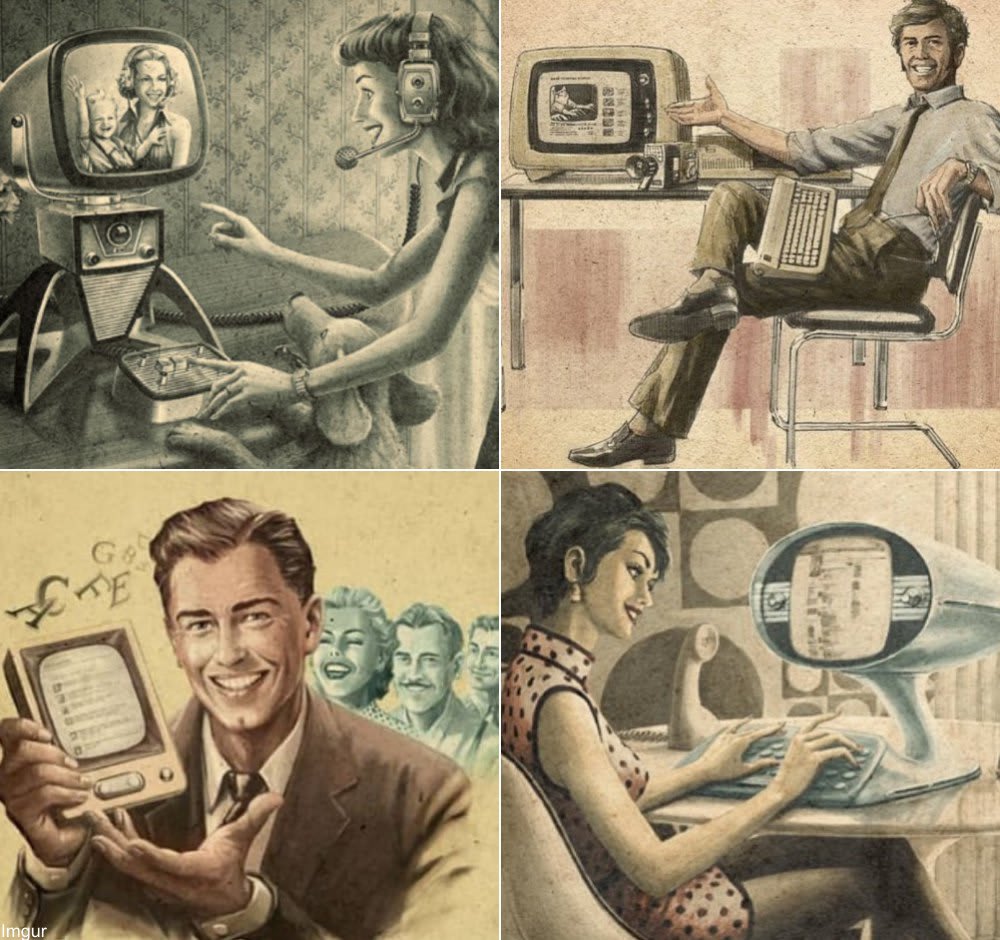 The series of four ads was created in 2010 by Brazilian ad agency Moma Propaganda for the “Everything Ages Fast” ad campaign. The ads show users in very retro environments, managing to connect with the internet in ways that were still many decades away in Mid-century America. Some call them future-retro while others have used the phrase neo-retro-futurist to describe these entertaining advertisements!

First up is Facebook and this ad places the company at the center of “social team-ups.” According to this ad for the “Faceboook Company” the user can “Share abundantly your photographs, experiences, and stories with your friends and families. For leisure or labour, Facebook is the enchantment ‘next look’ in social team-ups. Eloquent, economical, and modern examples of communication adequate for our times.” That computer she’s on is some really stunning design which conjures up images of spaceships and fins on cars. 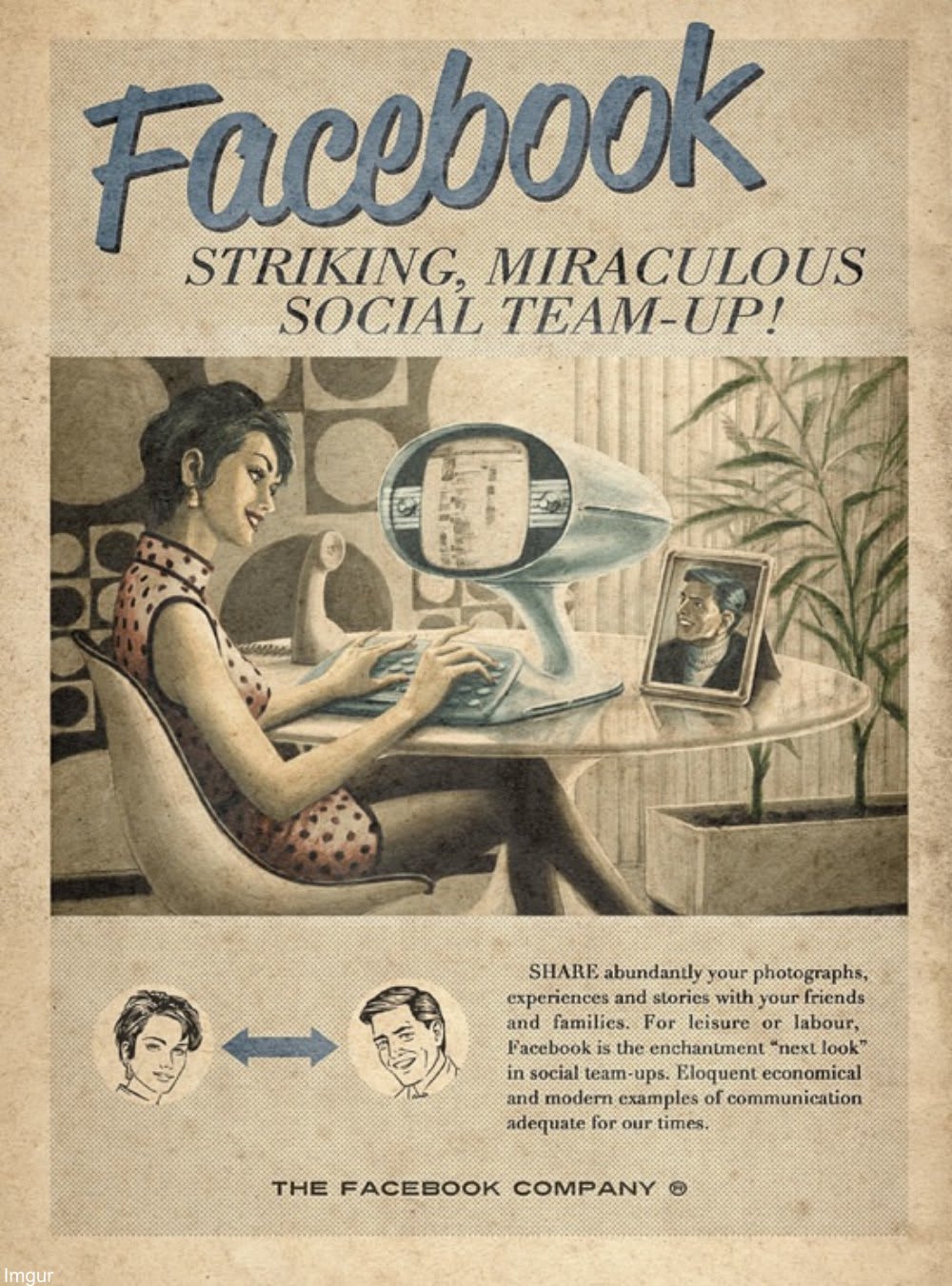 Next we have YouTube, the place where “your films will last forever.” The blurb at the bottom reads: “Send and watch splendid and captivating films, 24/7. Sports, news, commercials, and much more. The most charming and magnificent way to entertain the whole family.” We love the mod chair and realistic personal computer in this ad. 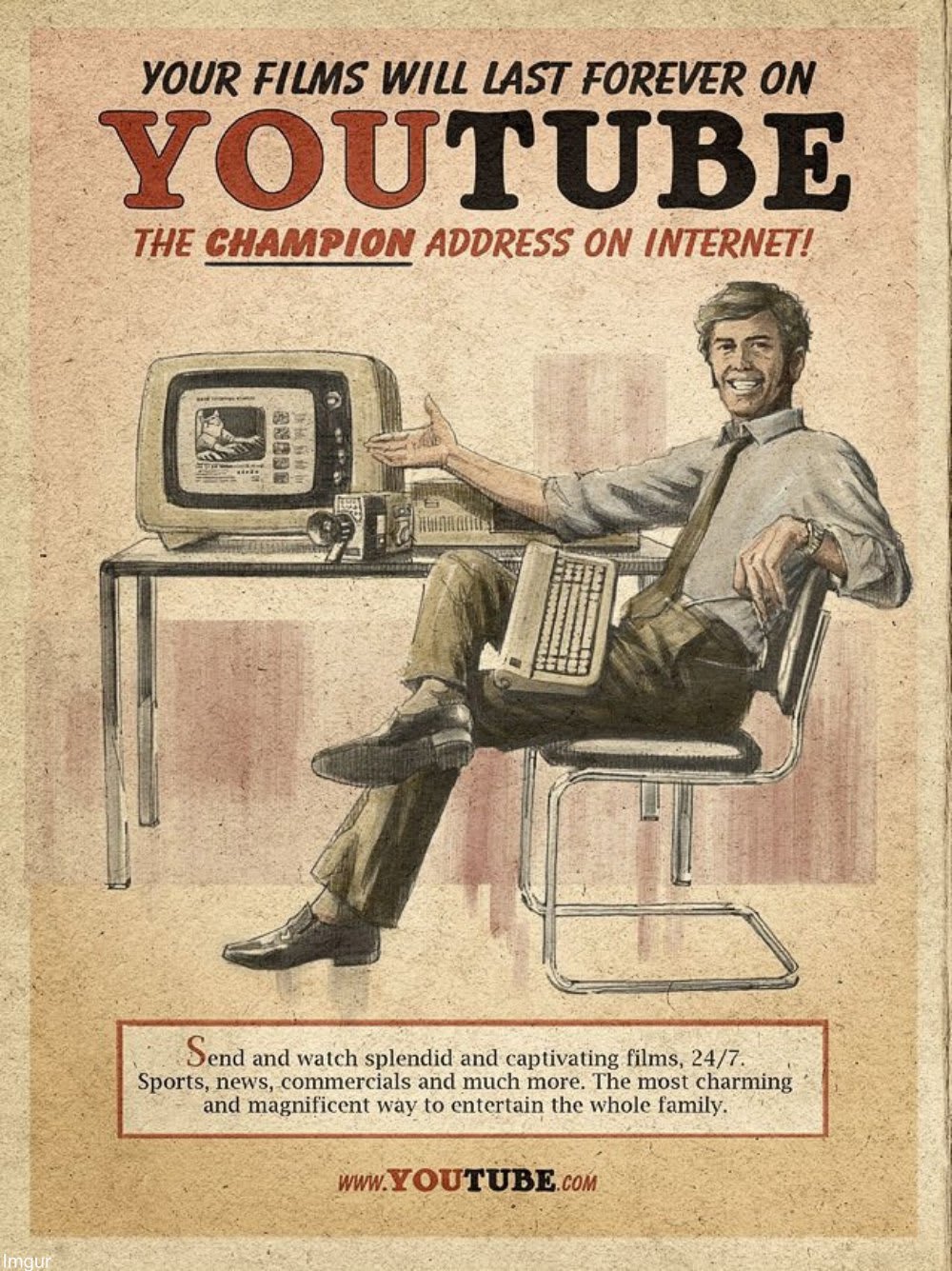 Then we have an advertisement for “Skype and Partners” which claims their “fabulous voice system” will unite your family. “Skype has the finest quality for you and your relatives to communicate via internet. The healthiest, most economical, and secure way to keep vigorous family bonds miles away. It’s more than a telephone. It’s a real audio-visual miracle that will put you in contact with a brand new world.” Even when long-distance was still a novelty, ads for the service focused more on the emotions of being able to hear the voice of someone you love who is far away. This interpretation of Skype, though, focuses on high quality and low cost more than the emotional comfort of speaking to loved ones. 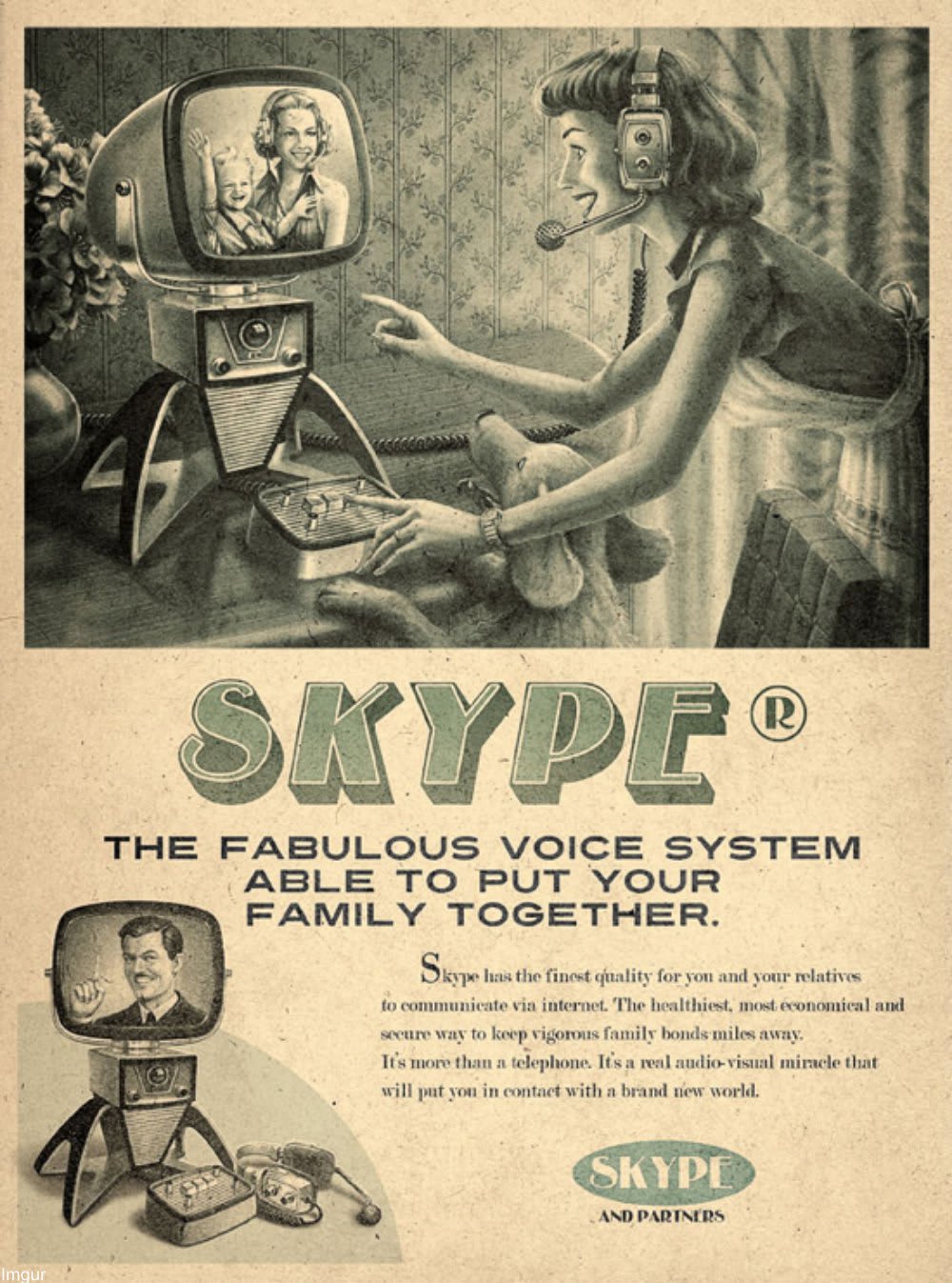 And how could we forget Twitter? This ad claims that Twitter is a “sublime, mighty community with just 140 characters!” The ad shows a unique hand-held screen with dial that looks like something from the original Star Trek series. The copy goes on the describe the wonderful benefits of being on Twitter: “A virtual locality with a wide assortment of people. That’s Twitter. A notorious new mechanism that lets you maintain contact with family and friends no matter where they are. By following or being followed, you will enjoy previously unimagined experiences like sharing incredible amounts of information including videos, photographs, etc. Twitter is a truly magnificent tool!” 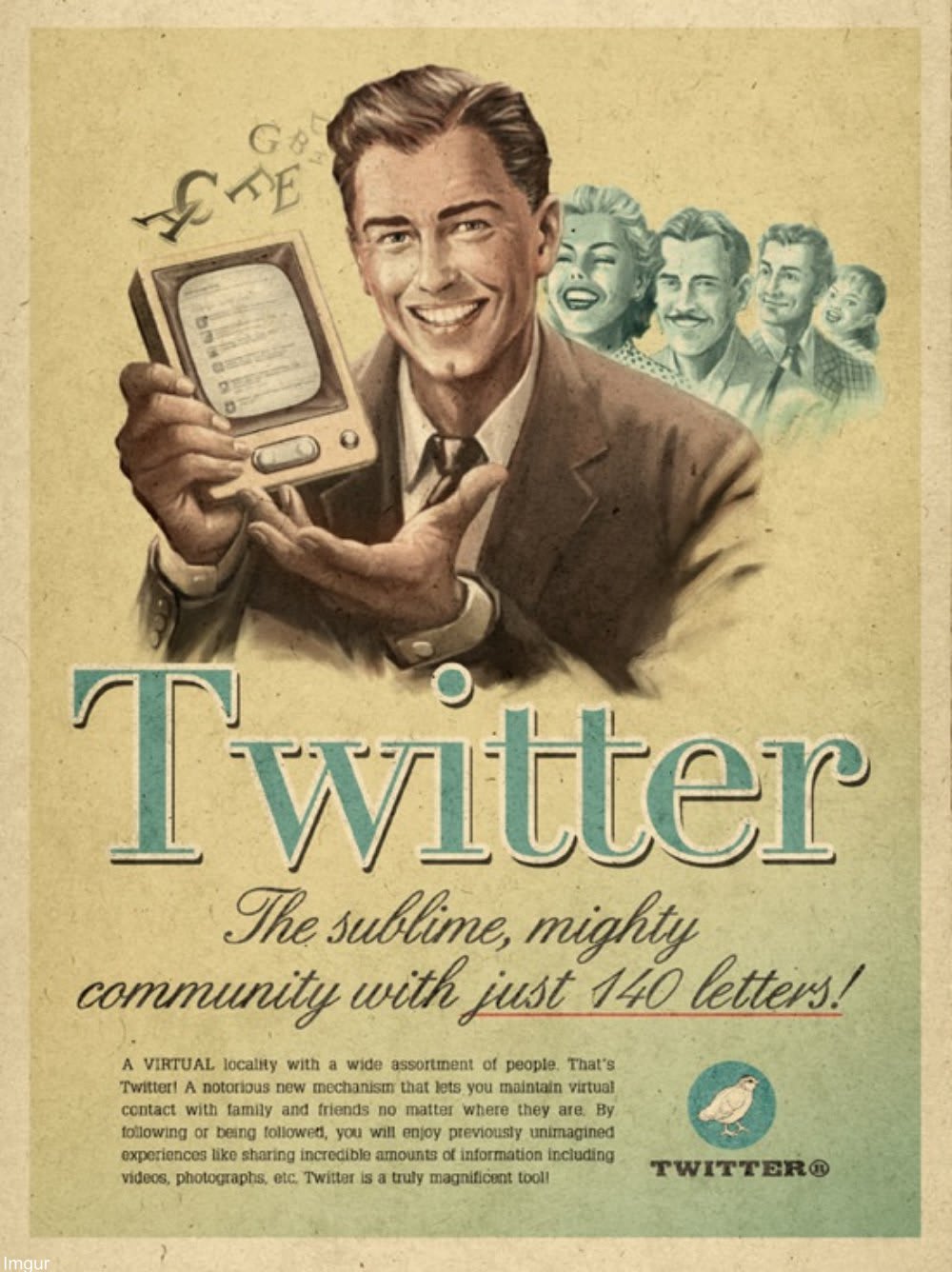