I Made 3 Kinds Of Homemade Peanut Butter, And I’m Never Going Back To Store-Bought Again

Peanut butter is a classic treat that you can enjoy during the morning as breakfast on toast, at lunchtime on bread with a little jam, or in the evening as a dessert in peanut butter cookies.

It can even be added to sauces to give your dish a savory nuttiness and blended into cocktails if you appreciate drinks that are smooth and creamy.

My family definitely likes to eat their fair share of peanut butter and recently, my youngest kiddo suggested trying to make our own. I loved the idea, but instead of making the same kind of thing you might find in any jar at the grocery store, we opted to try making flavored peanut butter.

If you’re interested in making your own peanut butter but aren’t necessarily a fan of cocoa, cinnamon, or coconut, there are endless options when it comes to other ingredients that would give your butter a delicious twist. Using some vanilla would make your peanut butter wonderfully rich and adding a little hot chili would give your peanut butter a fiery kick. You could also switch things up and use almonds instead of peanuts if you prefer the one nut over the other.

While I’d love to try other versions in the future, I was excited to start with the three I had picked out, so I planned a quick trip to the grocery store to pick up everything I’d need to get started. Read on to see the result of my attempt to make flavored peanut butter and find out how to make it for yourself. 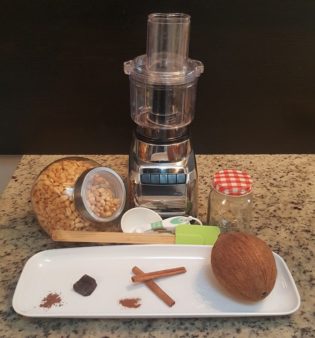 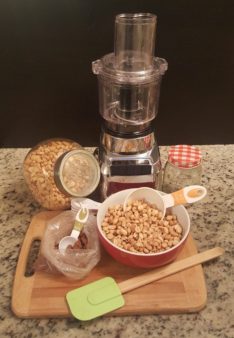 I decided to start with the cocoa-flavored peanut butter because, well, it’s chocolate! I was really excited to test it out and see how much of the cocoa taste would actually come through, so I grabbed the food processor, peanuts, and cocoa powder and got to work. 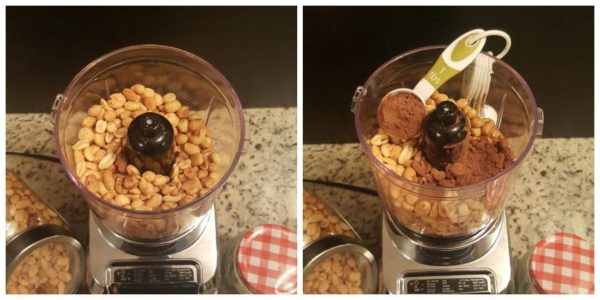 I added two cups of salted roasted peanuts to my food processor and then topped it off with two tablespoons of cocoa powder. I figured I would stick to one tablespoon of flavoring to one cup of peanuts across all three peanut butter creations to keep the recipes consistent. I popped on the processor’s lid and used the pulse/puree setting. 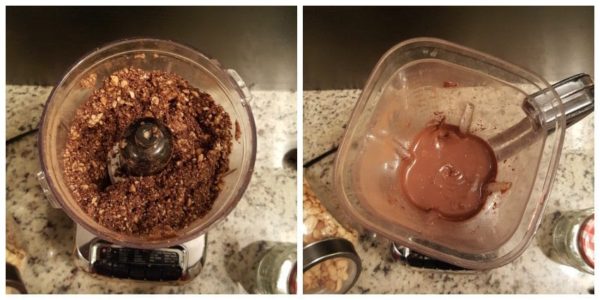 My food processor was having a hard time really breaking down the cocoa powder and peanuts, so I switched the mixture over to my blender to see if it would do a better job. The blender worked perfectly! It took about five minutes of blending to get a nice smooth texture. 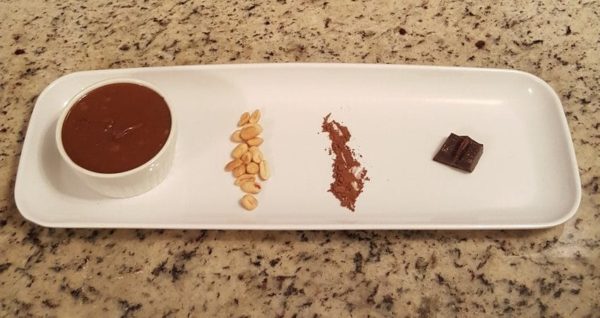 The cocoa-flavored peanut butter came out wonderfully. The texture was nice and smooth and I immediately picked up on the scent of chocolate and roasted peanuts. I couldn’t help myself, so I gave it a quick little taste and the flavors seemed pretty balanced, so I didn’t feel the need to make the spread a full-on Nutella-like mixture by cramming in more cocoa. 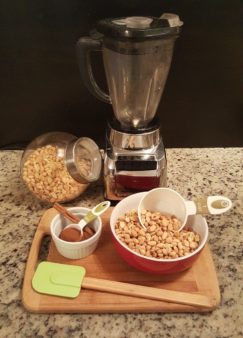 Next, I went with the cinnamon-flavored peanut butter. I rinsed out my blender well so that there wouldn’t be any leftover chocolate to affect the taste of the new peanut butter (although a cocoa-cinnamon peanut butter might be nice to try another time). I got out more peanuts, ground cinnamon, and another ramekin. 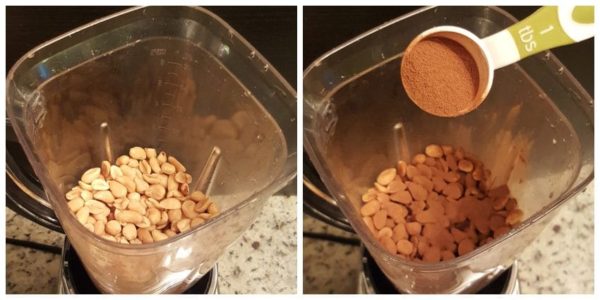 I poured two cups of roasted salted peanuts and two tablespoons of ground cinnamon into my blender. I then again used the pulse setting to break down the peanuts and blend the mixture together. 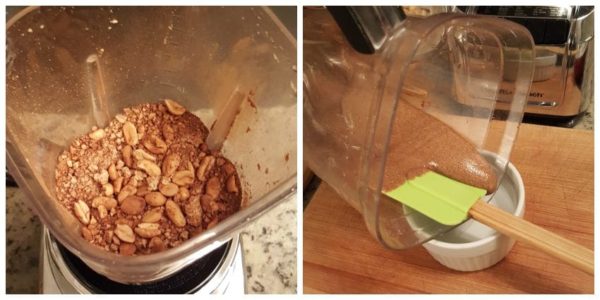 The blending process went a bit quicker than before and I only had to stop a few times to push the amazing smelling cinnamon mixture down in order to make sure everything was blending properly. Because I’m always paranoid about cutting myself with a blender, I made sure to keep the machine unplugged as I was using the spatula to move around the ingredients. Once the spread became beautifully buttery, I took my spatula and poured the mixture into my ramekin. 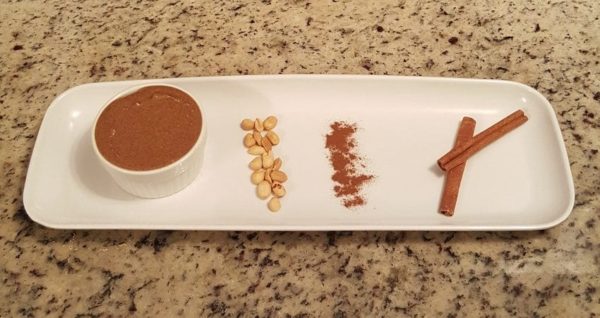 Just like my first attempt, this second peanut butter came out silky and smooth, thanks to my blending prowess. But if you like something with a little more crunch (i.e., chunky peanut butter), then you could stop blending once you’ve hit your target texture.

I again tried a little taste and was nicely surprised by how well the cinnamon complemented the peanut butter with a flavor that was not overpowering, yet very present. 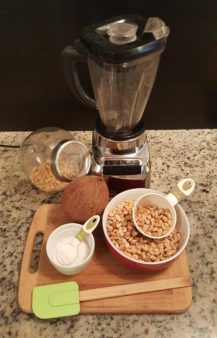 I was really on a roll going into the last flavored peanut butter, but also a little apprehensive. I knew that coconuts were tasty and peanuts are awesome, so why shouldn’t the two want to be peanut butter besties… err, right?! I got the rest of my peanuts together along with some sweetened shredded coconut, blender, spatula, and a ramekin, and started my final flavored peanut butter. 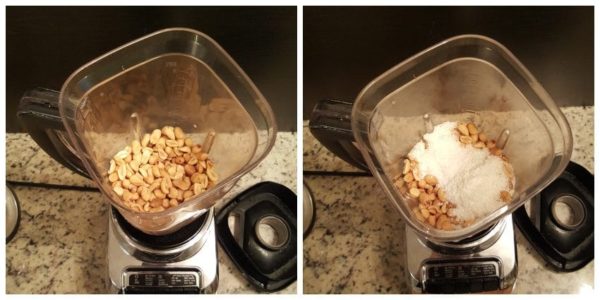 I kept things consistent and added two cups of roasted salted peanuts, just like the previous recipes. I then added two tablespoons of sweetened shredded coconut into my blender and set it to pulse. 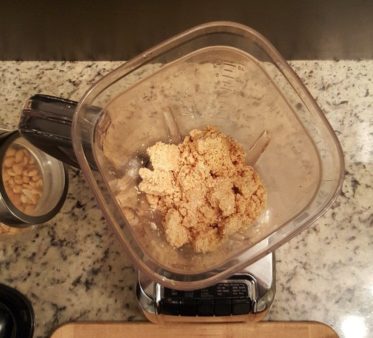 While blending the coconut and peanut, the resulting mixture looked a little dry and was taking longer to break down than the other flavors. I was tempted to add a little bit of coconut milk just to loosen up the ingredients, but I decided against it and kept on blending.

My patience paid off as the extra time in the blender turned the mixture into a soft and creamy coconut delight. The smell was more subtle than the cocoa and cinnamon but was still pleasant and warming — like, literally. The peanut butter was actually warm because of all the blending, which made it even more appealing and comforting. 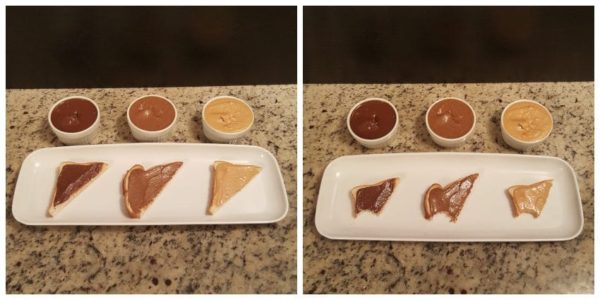 When my three flavors of peanut butter were ready to go, it was time for the final taste test. I toasted some bread and spread on the super-smooth peanut butter.

The cocoa peanut butter had a rich color and smelled like dark chocolate. After taking the first bite, I found that the texture of the spread was nice and silky but the cocoa flavor was a bit bitter. Next time, I might try using milk chocolate instead of cocoa to create a sweeter taste.

The cinnamon peanut butter came out with a beautiful caramel color and had a lovely cinnamon fragrance. The taste was amazing! Not only was the spread buttery and soft in your mouth but the cinnamon paired deliciously with the nuttiness.

The coconut peanut butter, with the help of some marathon mixing, was a light and creamy spread that had a very subtle coconut scent. The mixture could have used more coconut flavor, so next time, I might add another tablespoon or two of coconut.

While I plan on making a few adjustments to my homemade peanut butter the next time I make it, I definitely deemed the experience a success and highly suggest that you try to mix up your own delicious flavored peanut butter.