Clementine Delait was a Frenchwoman of distinction for many reasons, but she is remembered today as a bearded lady. While she did not start out her career this way, her beard most certainly helped her to achieve the things she wanted in life. Whereas most women wouldn’t feel great about this physical trait, perhaps viewing it as unfeminine, Delait early on was personally very fond of her facial hair. Find out how she managed her businesses with the help of her luscious beard. 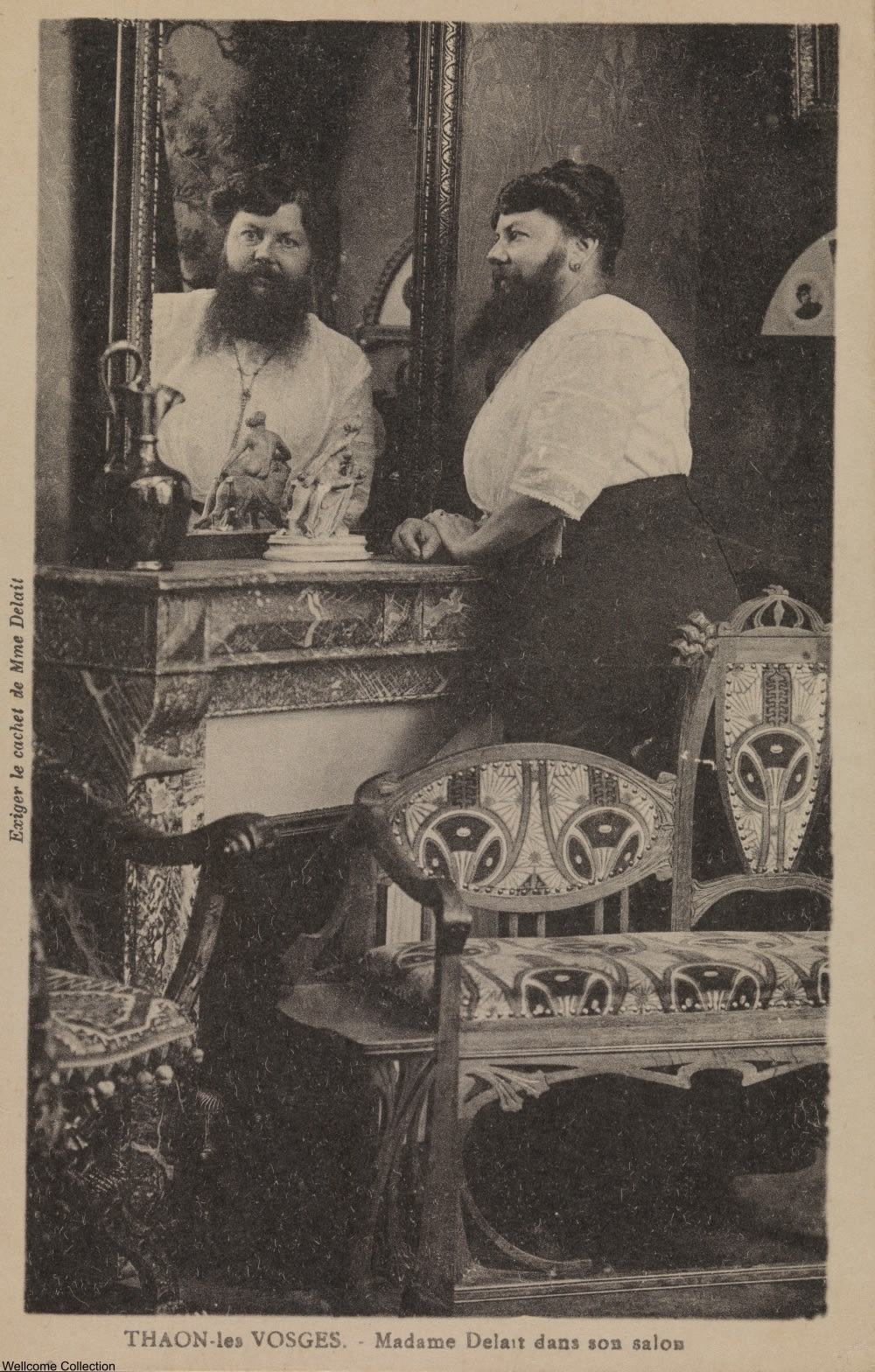 The subject of many French works, Delait has been a source of curious interest for more than a century. The photos of her in Edwardian dress, hair perfectly coiffed, with a giant beard are like something from a romantic scrapbook from another dimension. She is seen in gardens or at her vanity or posed with dogs (which she loved). These are the same delicate poses that models used for postcards that the Allied soldiers could by to send home during World War I. However, it should be noted that Delait had a permit to wear mens clothing should she wish (doing so without a government issued permit was a crime for a woman). 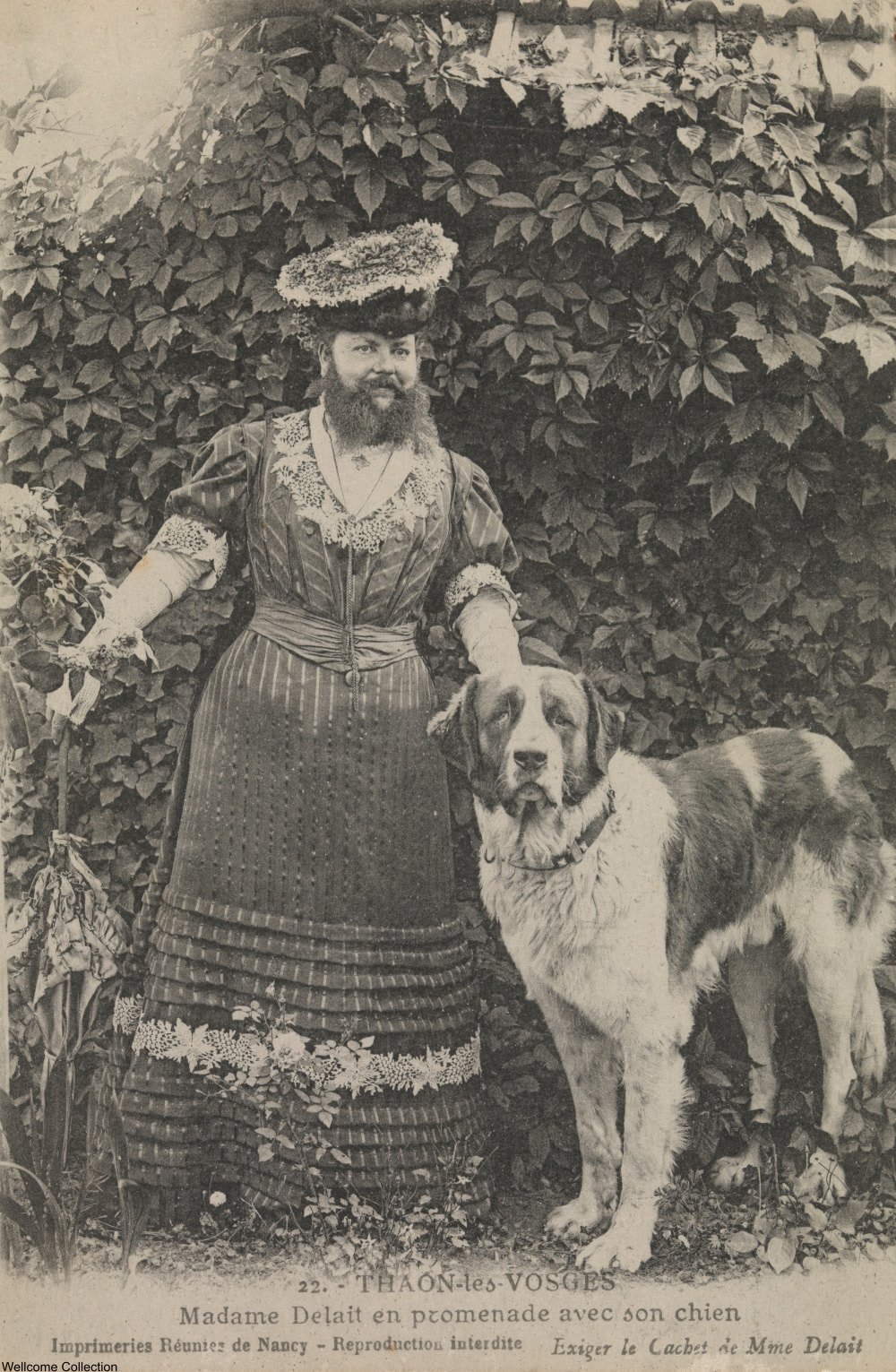 Her short memoirs, handwritten with the help of a local historian Pol Ramber, were rediscovered in 2005 by second-hand dealer Roland Marchal.

Born as Clementine Clatteaux on a farm in 1865 in Thaon-les-Vosges, France, Delait recalled later that her skin was often brown from the sun, something which she thought went rather well with the thick mustache that she was growing in her teen years: “My youth was that of all the girls in the country, rough and hardworking, but at 18 my upper lip already had a promising down that nicely highlighted my brown complexion.” This is the kind of confidence that people read books and go to years of therapy to achieve today!

Hirsutism can be caused by many different things, from ovarian cysts to medication to Cushings disease. In the modern population it is believed to affect between 5-10% of women, but around the turn of the century medicine was quite a different field and comparatively little was known about the role of hormones in our bodies. 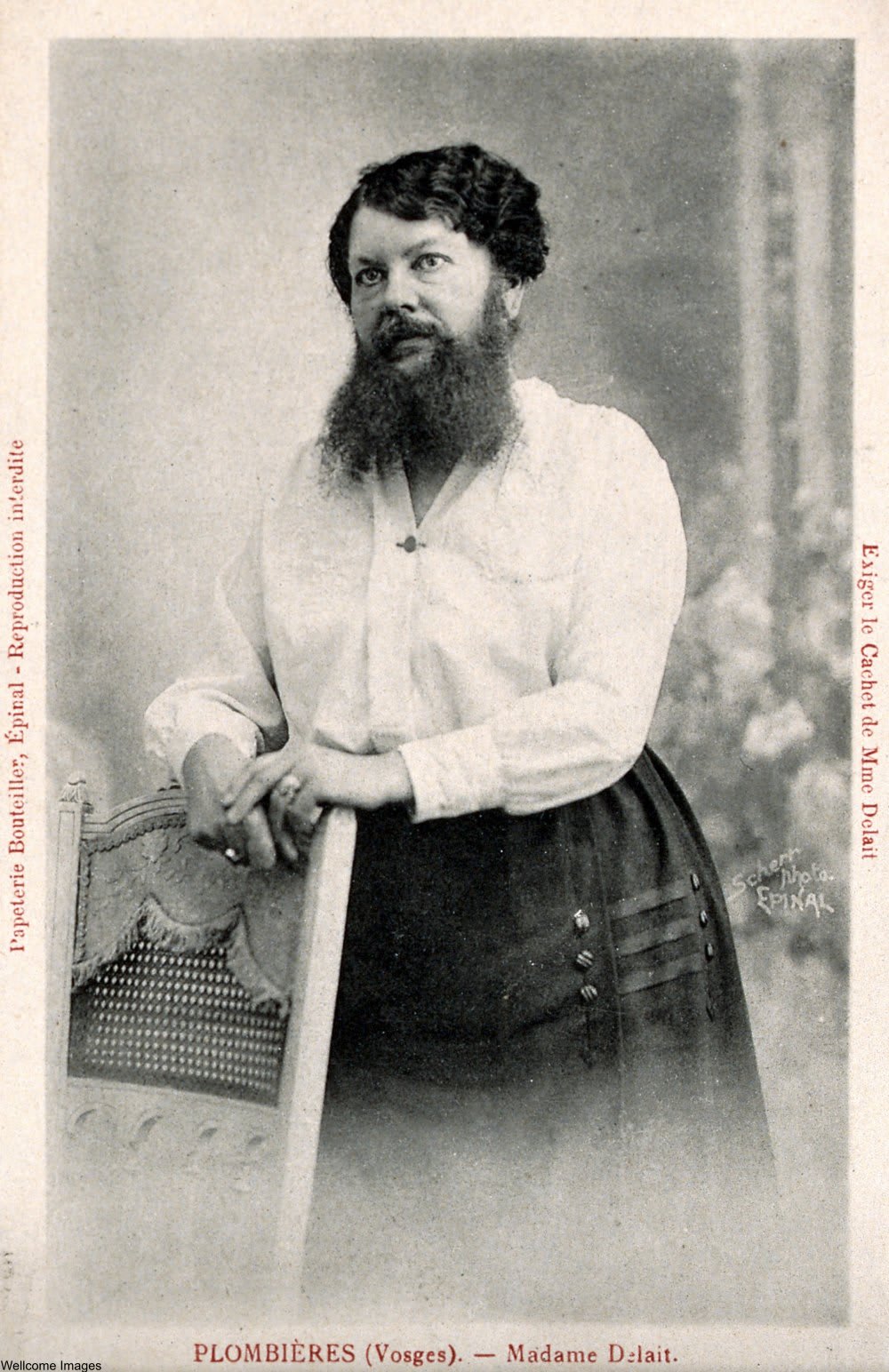 Delait knew that a thick mustache was not the the image of a beautiful wife that most men had and so she shaved her facial hair for years. She married Joseph Delait, a baker, at the age of 20 in 1885. The couple never had biological children, instead adopting a little girl from Spain named Fernande whose parents had died in the Spanish flu epidemic. By all accounts Delait was an excellent mother. 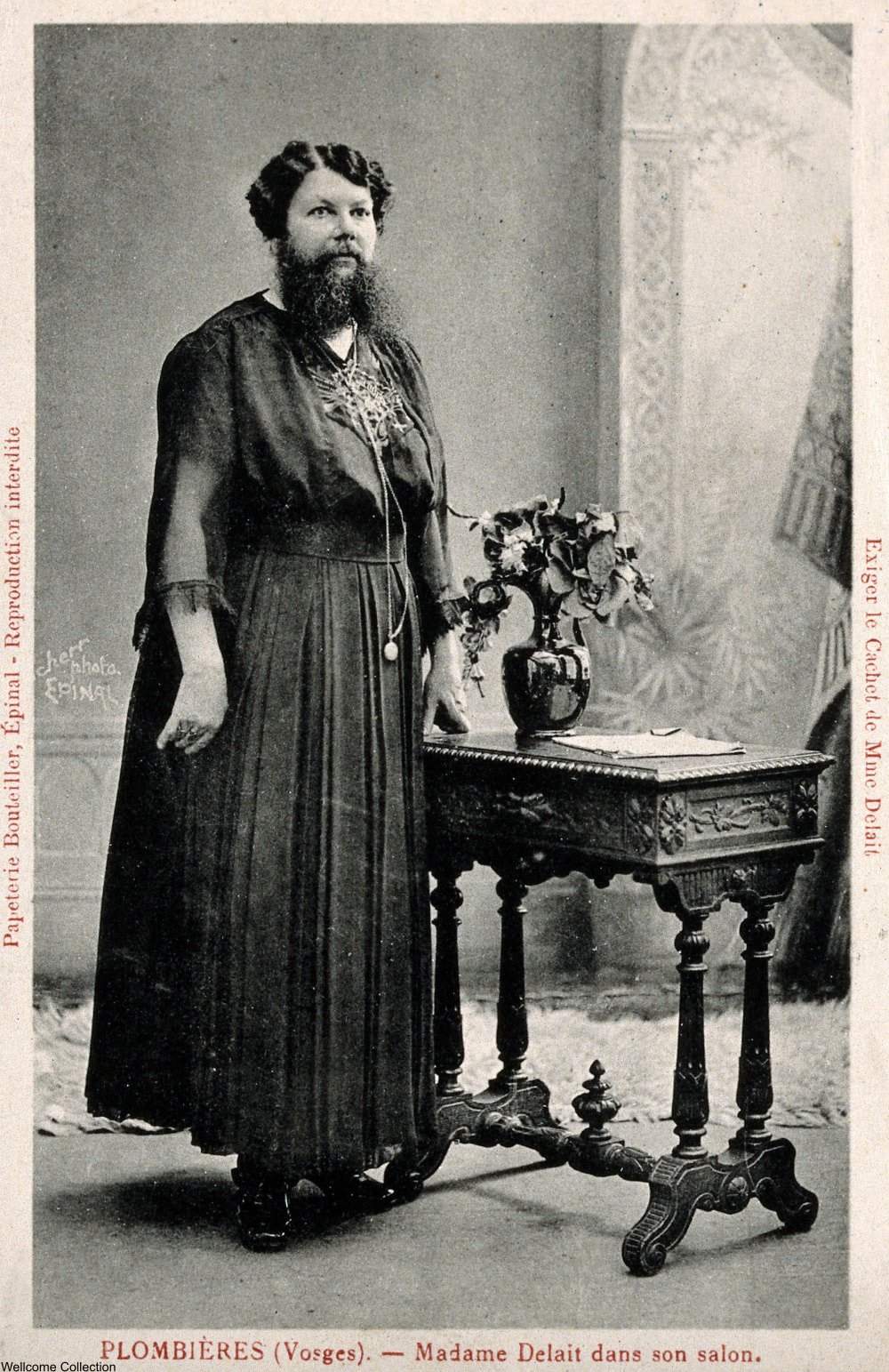 The Delaits ran a bakery for years, but their fates changed when a sideshow performer riled up Delait in 1900. The performer was a bearded lady with what Delait found to be a feeble fuzz that she did not consider worthy of the title beard. Delait was arguing with a customer over it later and she bet him that she could grow a better beard than that (by some accounts it was her husband who she made the bet with). In a matter of two weeks, Delait had grown a luxurious beard, something which her customers flocked to see. The couple then opened a cafe which they named Café de La Femme à Barbe, or Cafe of the Bearded Woman. Her facial hair now was a selling point which helped their business grow. 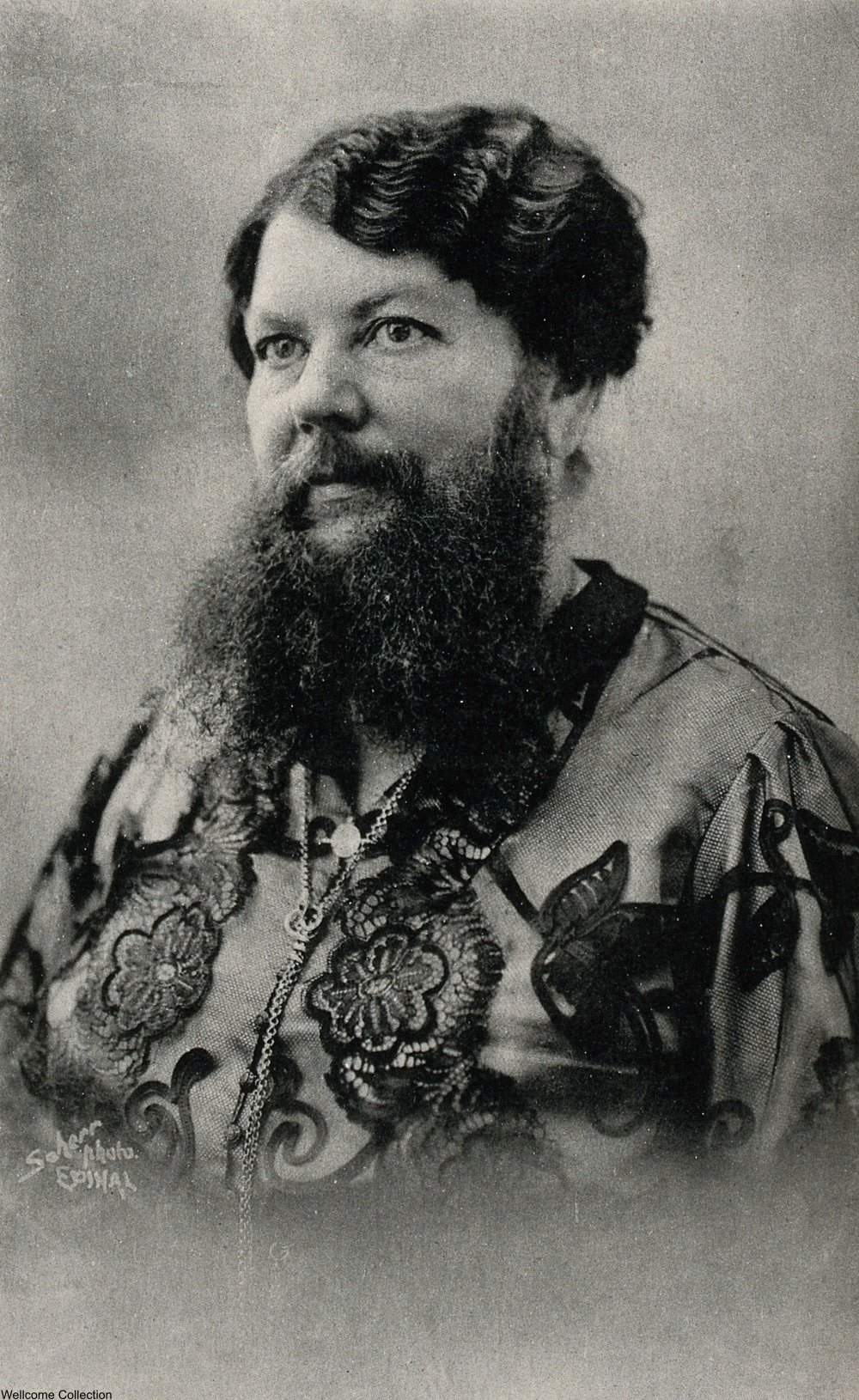 Delait was approached by sideshows and circuses offering her contracts to tour with them. But, she did not want to leave her family and her husband’s health was increasingly troubled. She wanted to stay and care for her husband and run the cafe (her beard gave her quite some authority with obnoxious customers). Delait’s compromise was to sell a bevy of postcards in her cafe, souvenirs which showed that one visited the business of the famous bearded lady. In her memoirs she states: “It did not occur to me that I could only be a curious woman exhibited, I was much more and much better than that.” 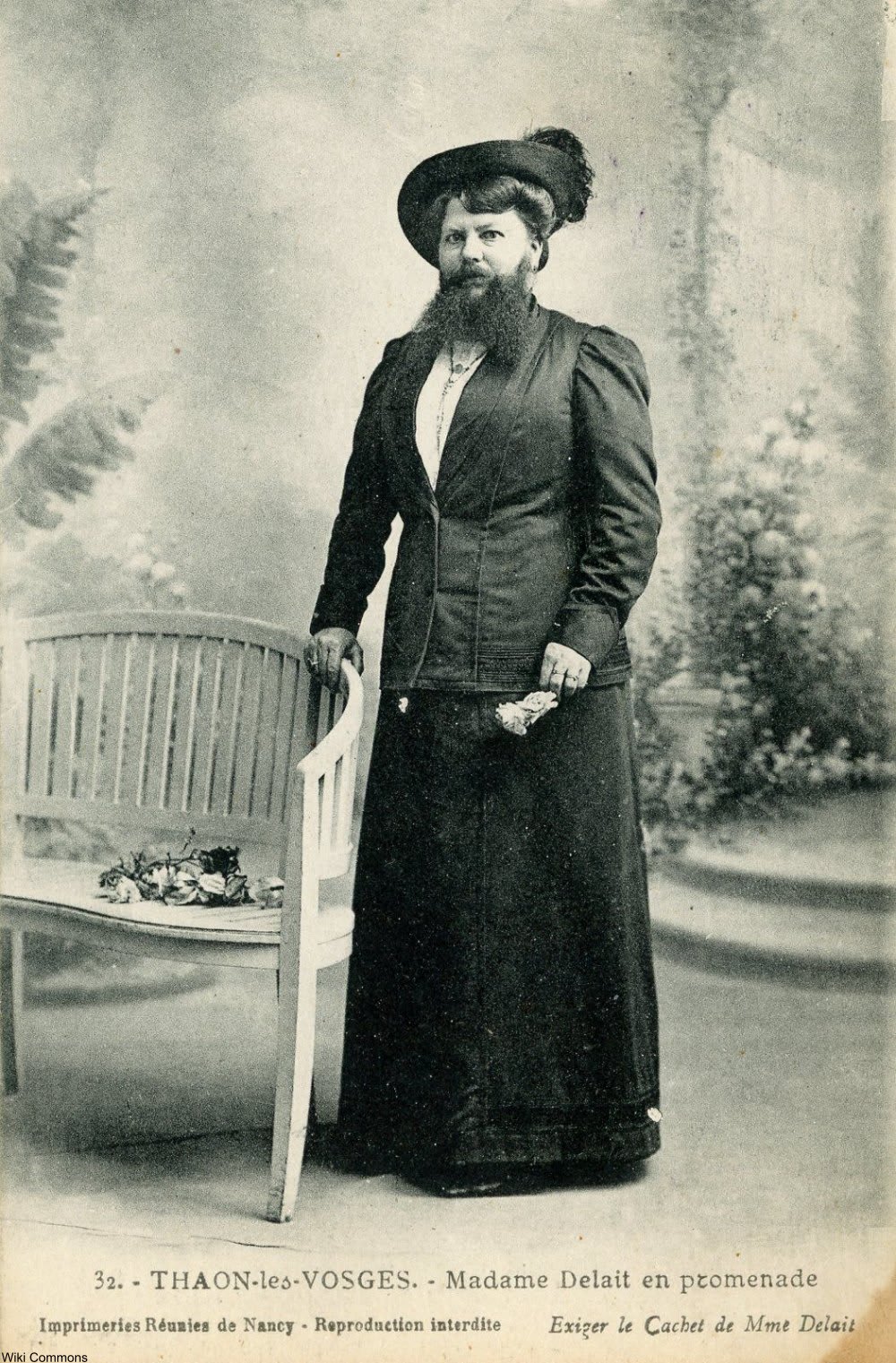 After the death of her husband in 1928, Delait finally conceded to the agents asking her to tour, though she fretted over the few white hairs that were slowly creeping into her silky beard. Her final years in declining health she was tended to by her devoted daughter. Delait died in 1934 and, as per her request, her headstone bears the phrase “La Femme a Barbe” as she truly wanted to be remembered for her commendable beard.

99-year-old woman donated her body to science not realizing that she was a medical anomaly : Click “Next Page” below!