Looking back 100 years ago to the Spanish flu pandemic of 1918-1919 and there are some eerie similarities with how things are playing now and the Covid-19 pandemic. The now-familiar sight of people in masks is something both events share. However, there are also a lot of differences in how things are handled these days. There are many similarities and differences, as the images below illustrate. 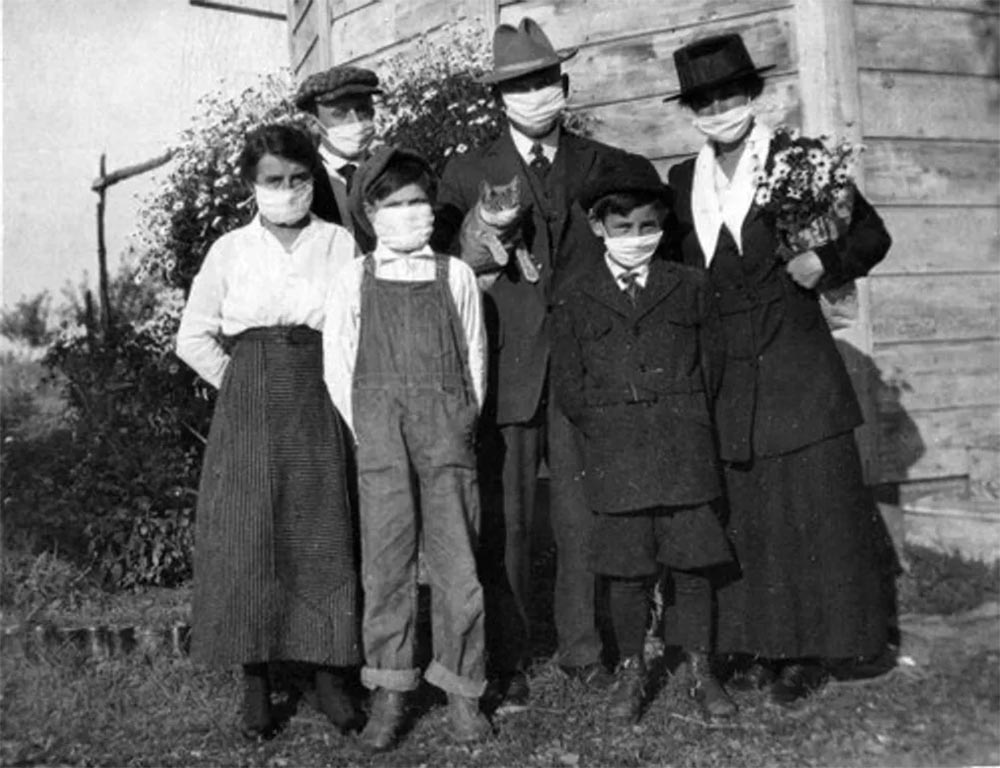 While scientists at the time were just beginning to understand how viruses worked inside the body and were making diagrams of the flu from postmortem specimens, these images were not widely published in newspapers. Contrast with today when images of the novel coronavirus are all over the news. 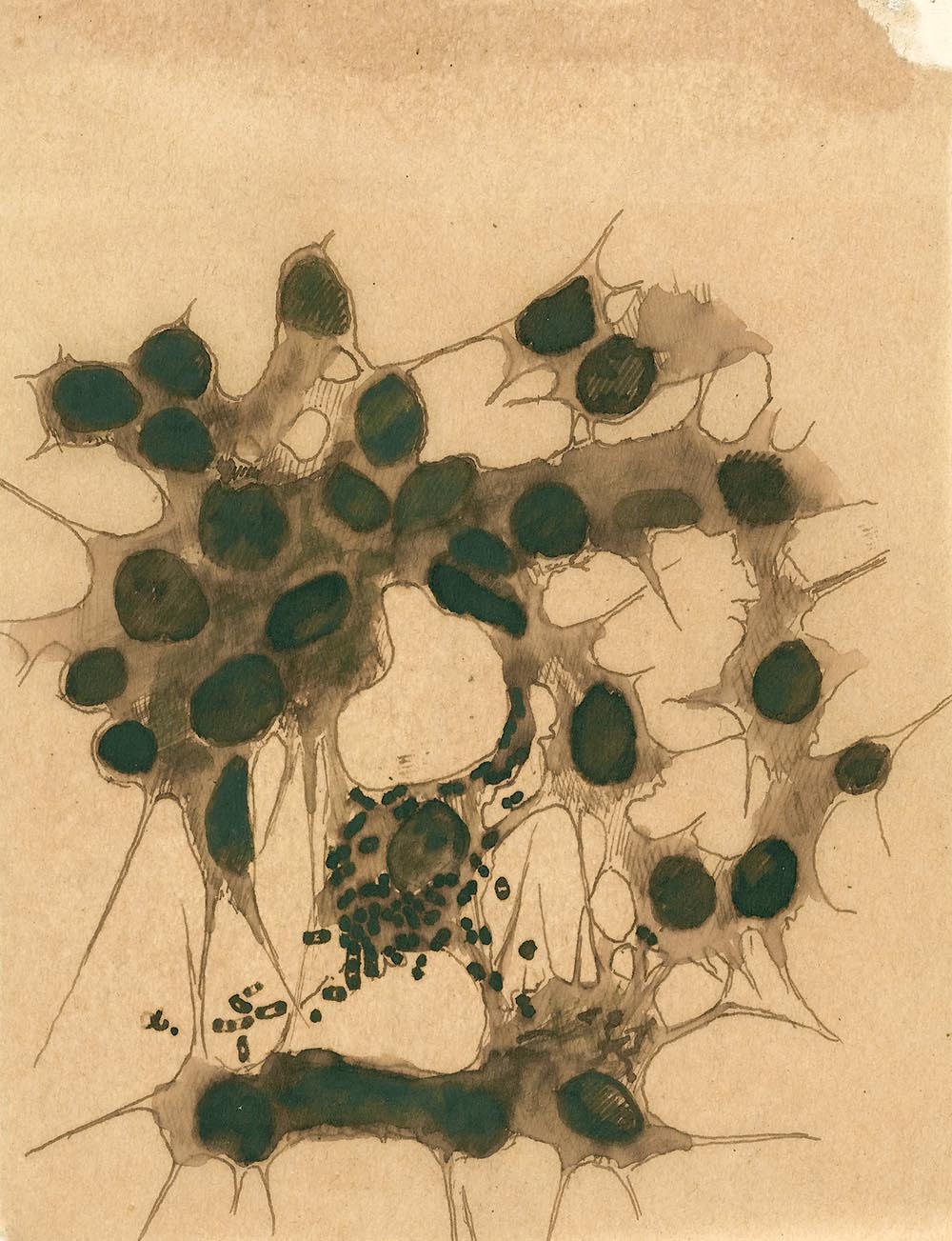 At the start of the 20th century it was still quite common for men to spit in public, be it outdoors or in, due to widespread usage of chewing tobacco. Indoors spittoons were set up at the grocery, the bank, hotels, restaurants- you name it. But, along with a growing knowledge of how disease spreads, public campaigns to end spitting were undertaken all over the world, including at the this naval ship yard where a huge sign explains how dangerous it can be. 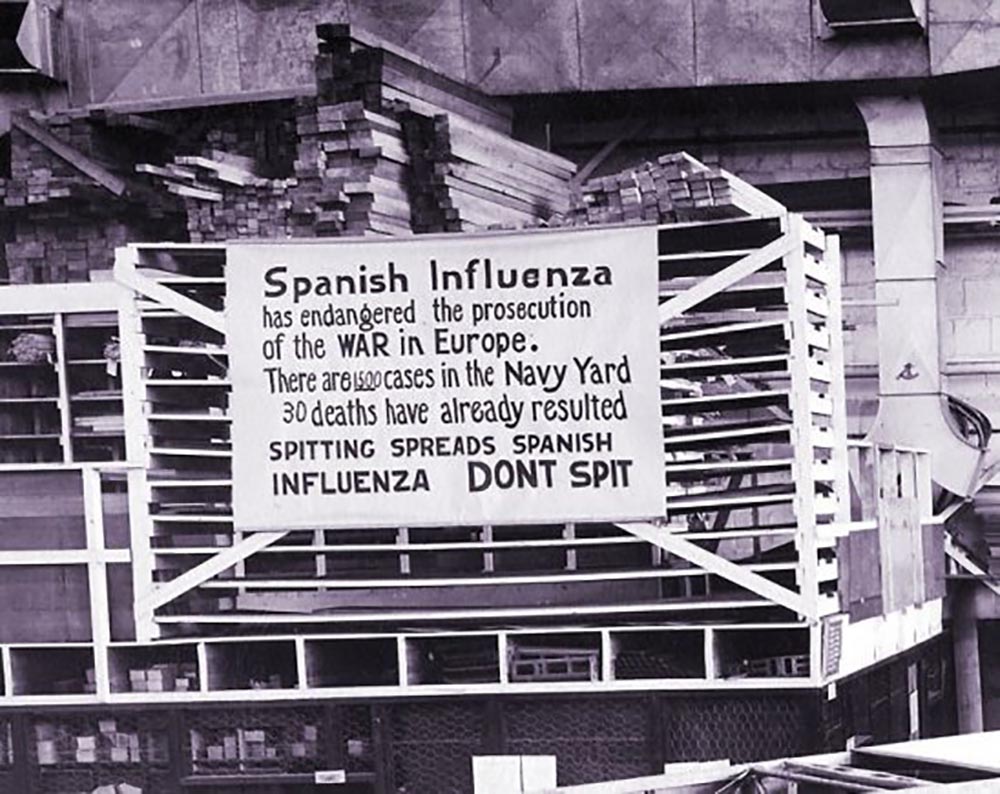 The original caption for the image below, from the Red Cross, gives some indication of how public transport was being handled, “Precautions taken in Seattle, Washington, during the Spanish Influenza epidemic would not permit any one to ride on the street cars without wearing a mask. The Red Cross made 260,000 masks.” 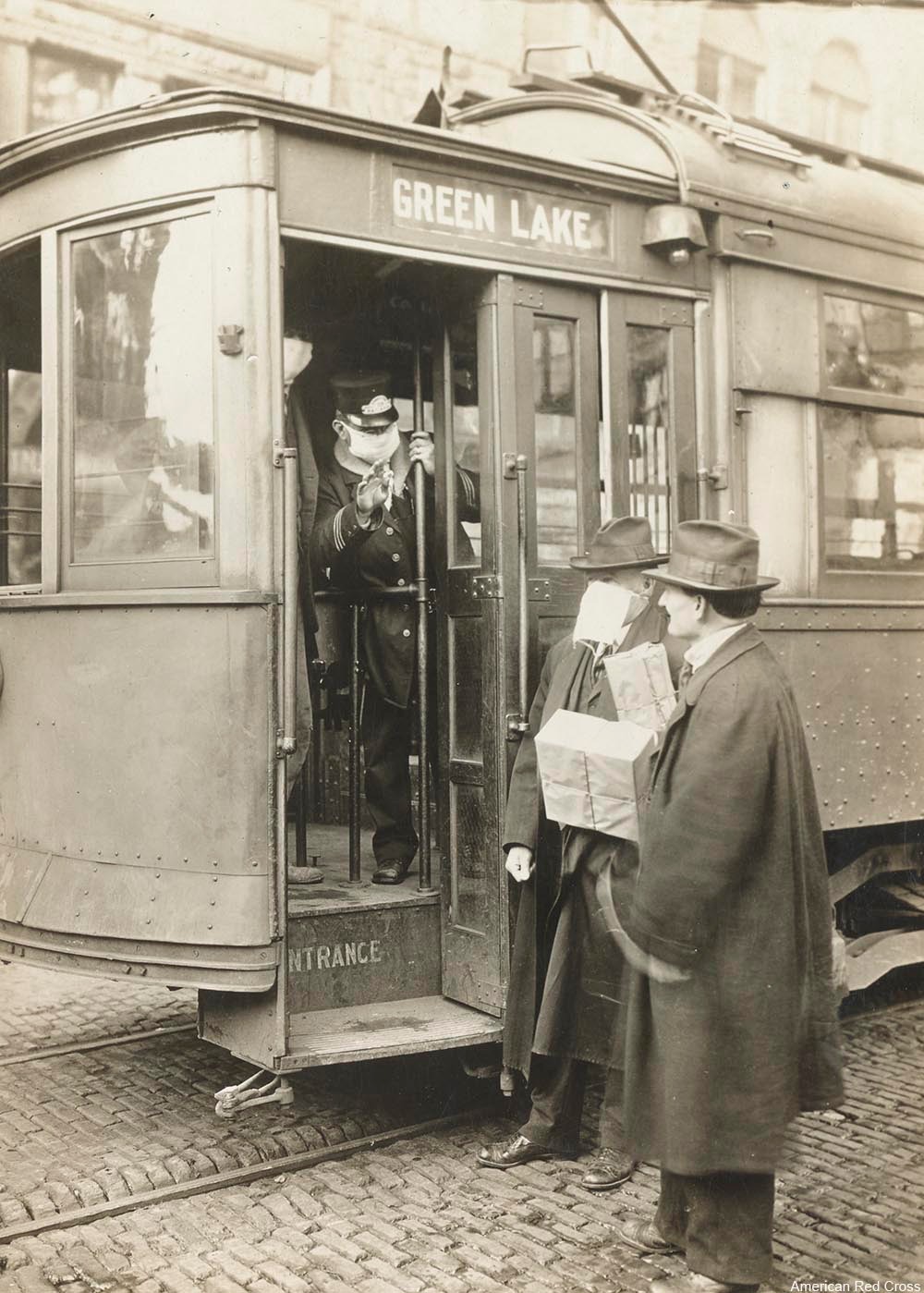 The newest thing of the day back then was the telephone, something most people did not yet have in their homes. But, those that did were subject to operator shortages as the young ladies who manned the lines fell stricken with the flu in great numbers- in some areas a third of the operators were incapacitated with the flu. The operators were not “easily replaced” according to telephone executives at the time.

The ad below urged people who already had phones to stay off the lines so that urgent calls could come through. As the network for the phone system expanded in the U.S. it would become less common for the lines to be busy or jammed. But, in 1918 this system was still in its infancy and less than half of American homes had a phone. 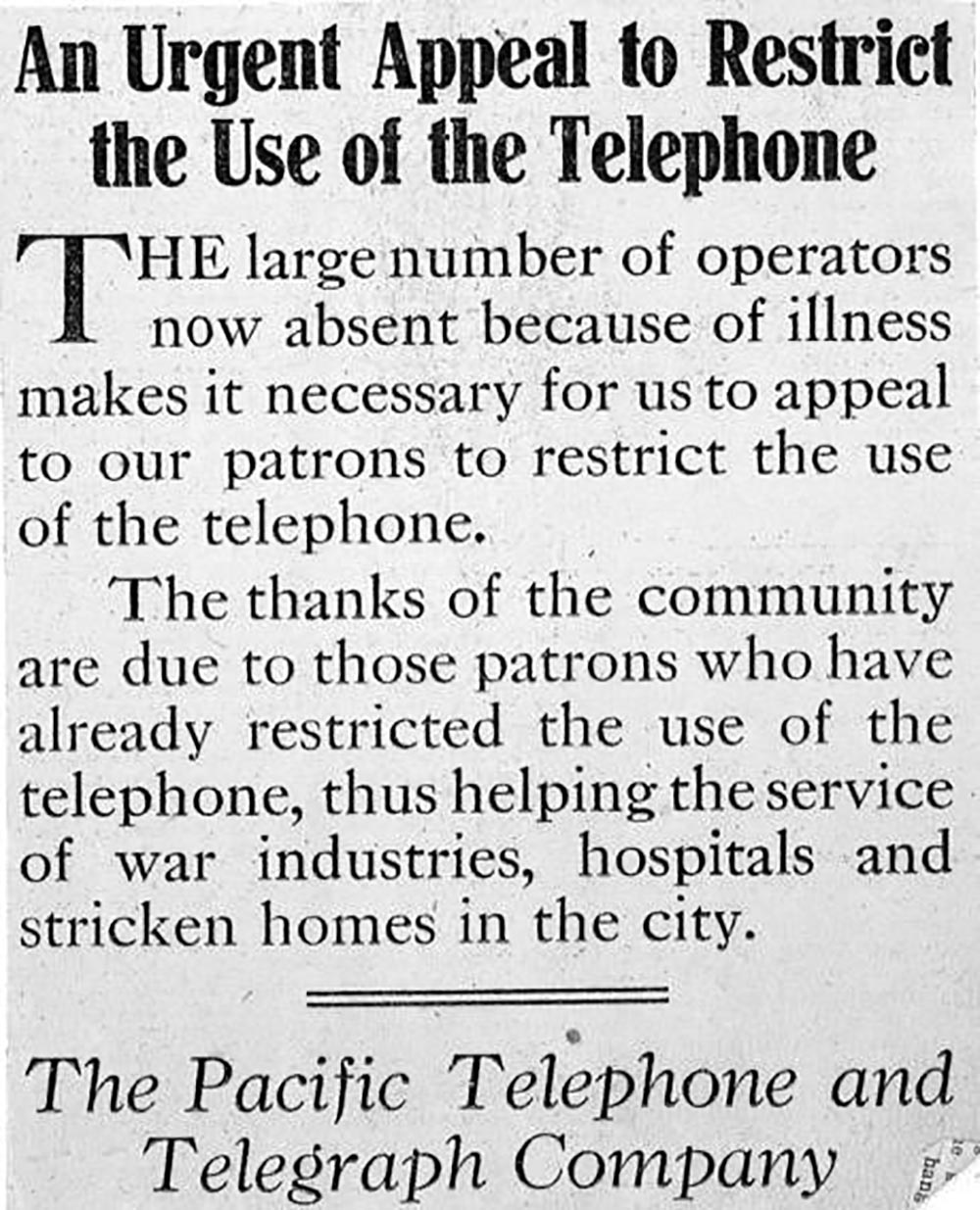 In New Zealand passengers boarding trains were instructed to receive breathing treatments from these conical smokers before they could board. The treatments were wrongly thought at the time to prevent the spread of the deadly flu. The sad thing is that using these communal devices probably actually spread the flu to people who were otherwise uninfected. 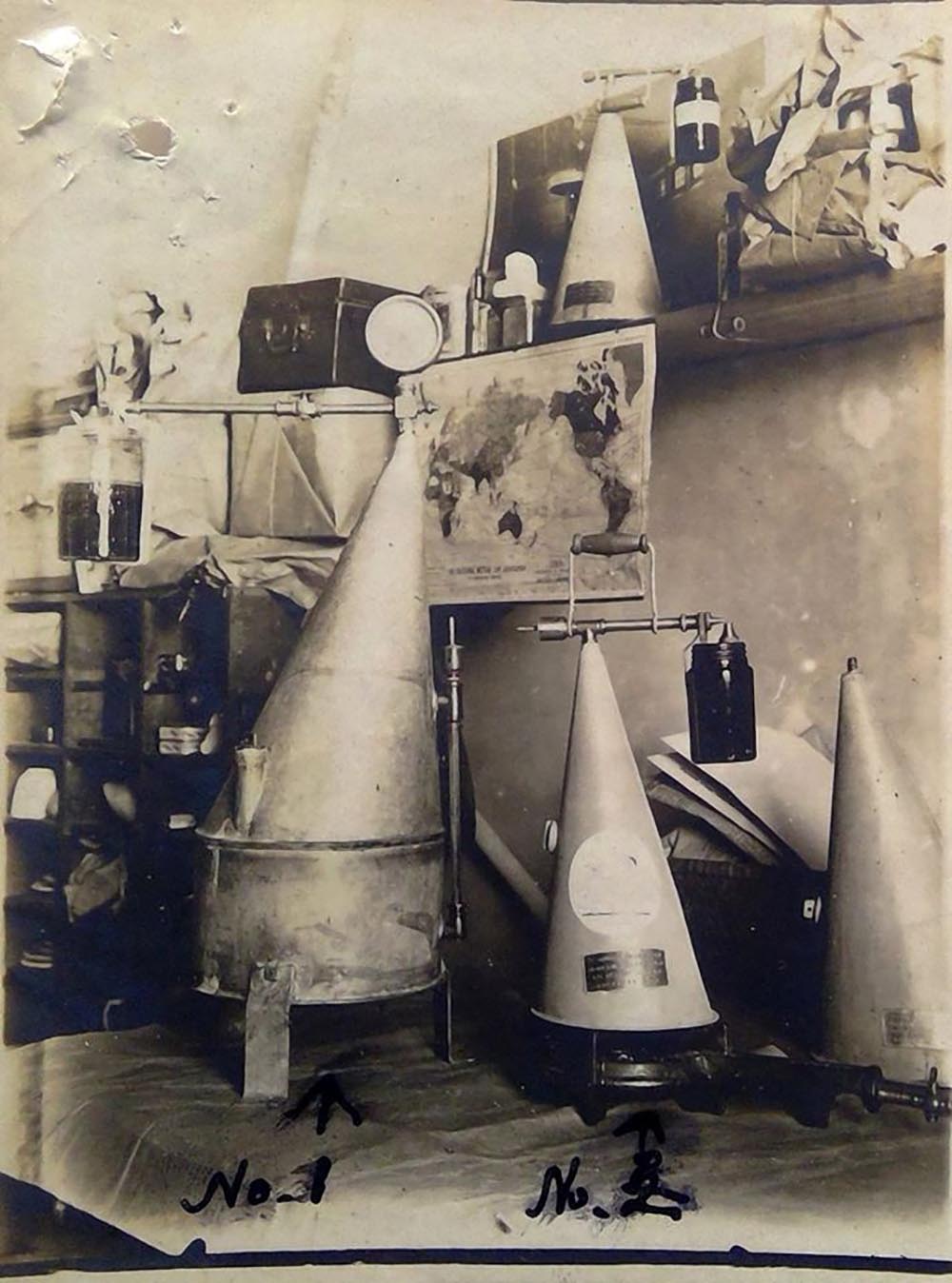 The Spanish flu was shown to have a damaging effect to not only the lungs. In a small number of cases H1N1 influenza fatal edema of the brain was present, as well as renal failure. Today, Covid-19 has been shown to have detrimental effects on other organs aside from the lungs, including the heart, kidneys, and intestines, among others. 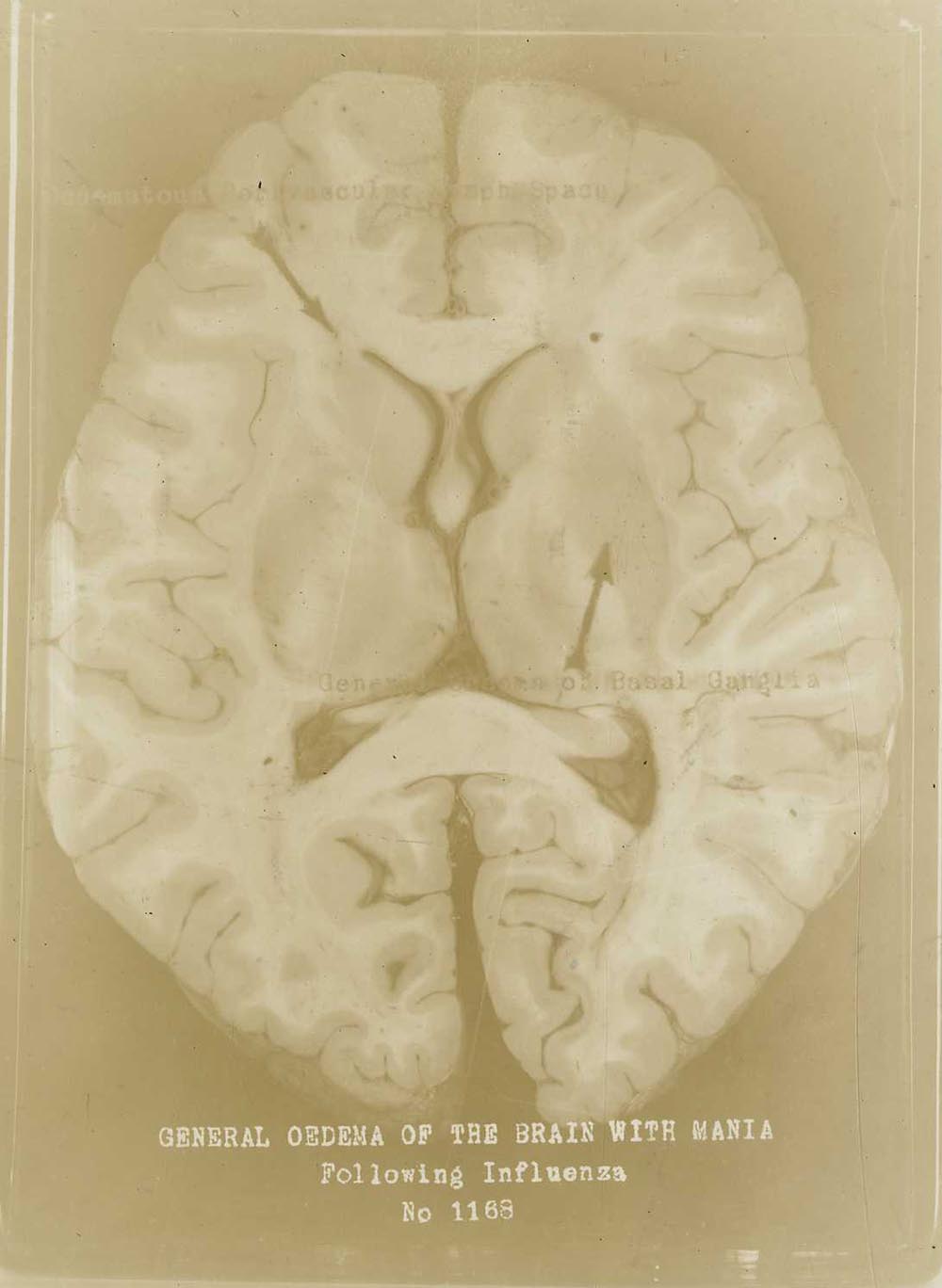 In 1918 in some areas the number of patients was so great that makeshift hospitals had to be set up. The nurse below, wearing a folded bandana instead of a proper mask, fills an enamel pitcher from a fire hydrant converted into a spigot. In many places people had to manage without the same access to running water that we have today. 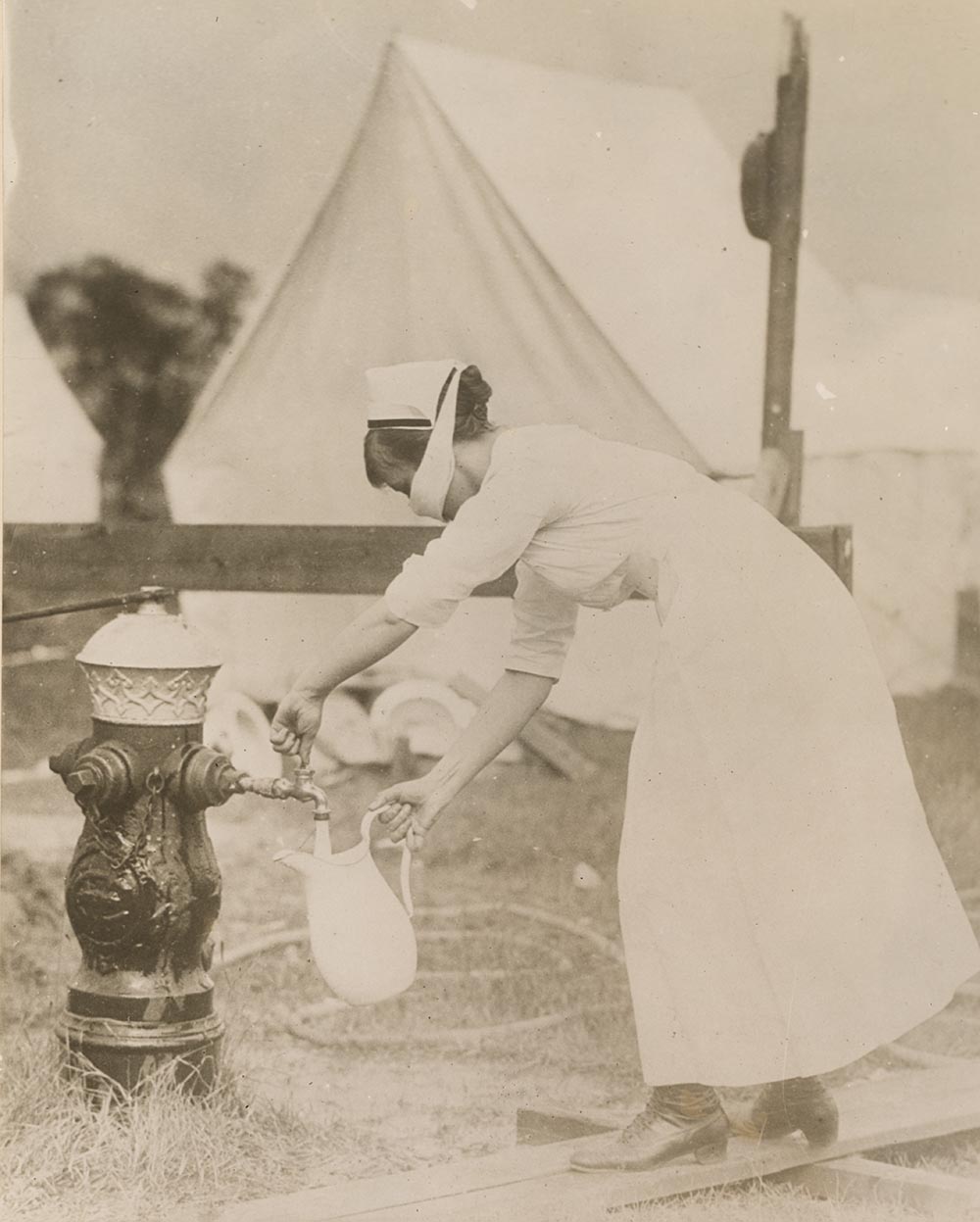 Like today, many essential workers, like medical professionals, mailmen and bus drivers, wore masks to fulfill their daily duties. 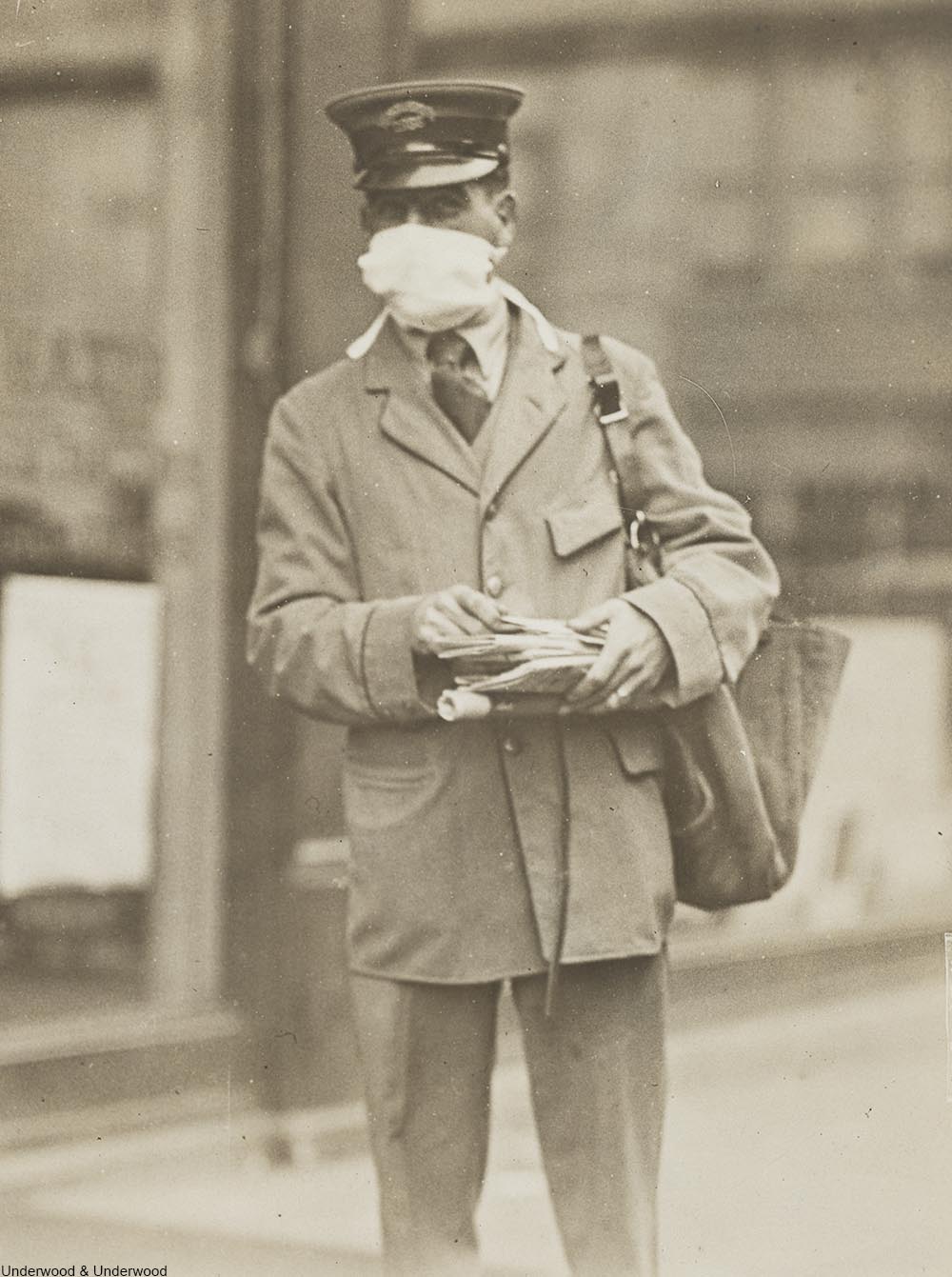 As with the current health crisis, masks were in great demand in 1918. While the most common surgical masks made of gauze were in short supply, people improvised. The sign below from Alberta, Canada, gives instructions at the bottom on how to make a mask at home from cheesecloth and string, not unlike similar instructions that have been offered by the U.S. government in 2020. 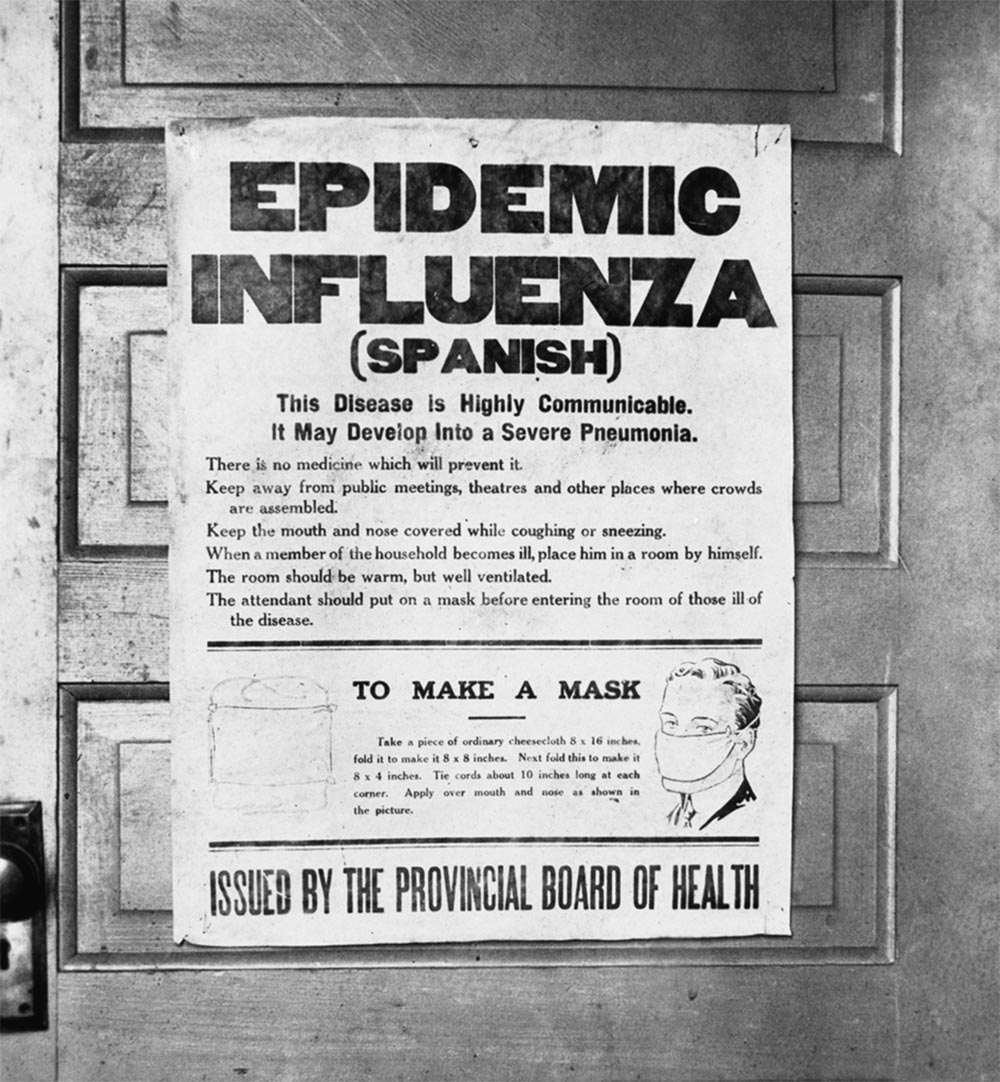 Like the cruise ships of the recent months that were left with no place to dock or which have not allowed to disembark because of quarantine, so, too, did oceanliners of 1918 arrive in ports with strict instructions to stay in quarantine. 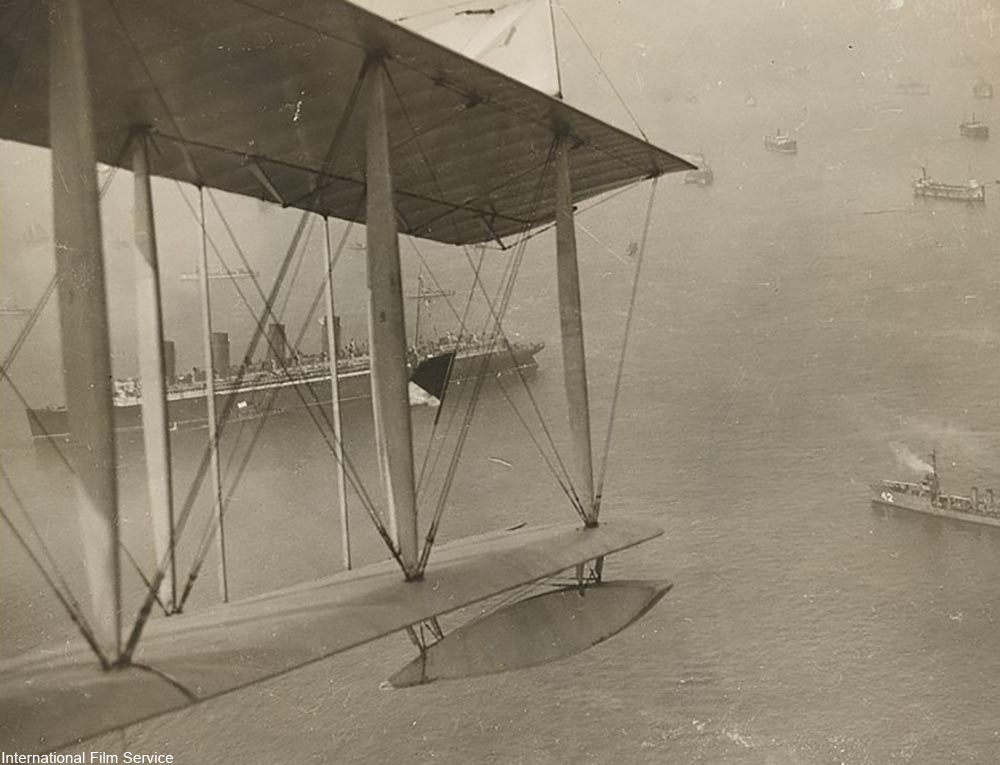 Despite having a limited knowledge of how the Spanish flu virus worked or how to treat it, the medical and common sense opinions of the time were that fresh air was incredibly good for you and prevented illness. They knew enough to want to avoid crowded indoor spaces and to that end some activities in 1918, instead of shutting down altogether, were simply held outside. The photograph below is of court proceedings from San Fransisco. Today any gatherings like this are now known to be risky, even outdoors. 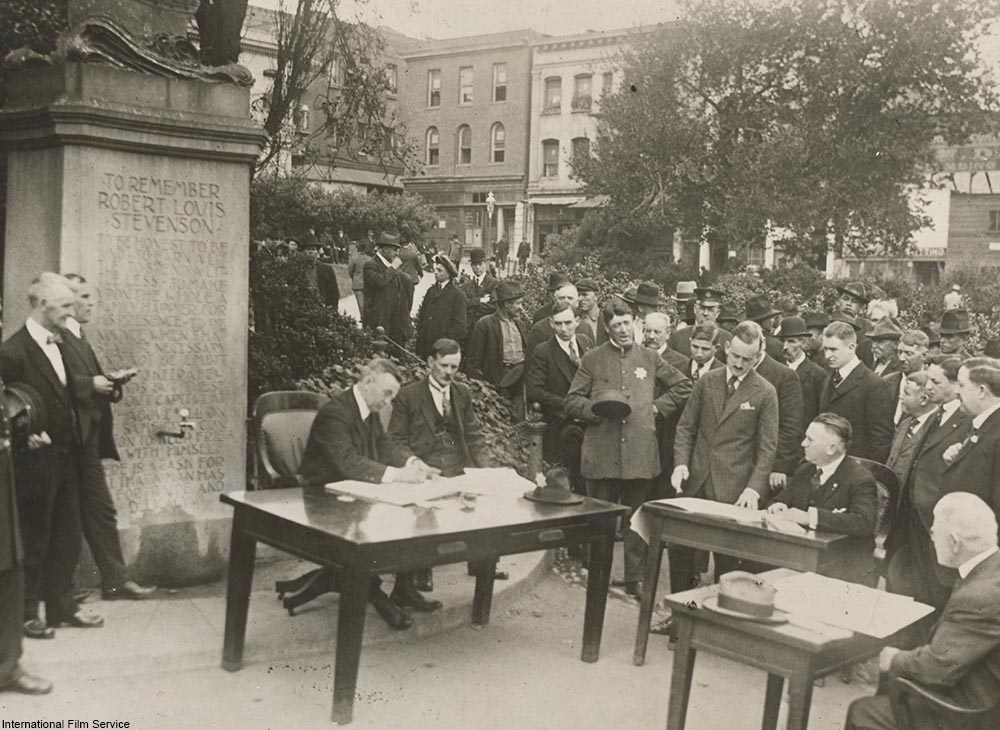