Our 14.5 Ounce Baby Girl, With Less Than A 20% Chance Of Survival, Lived. She Made It. She Survived.

“My little girl had no chance of survival. How could a 14.5 ounce baby survive? Doctors had given her no chance, no hope.

My pregnancy came as a shock to everyone, myself included. I was diagnosed with PCOS, Polycystic Ovarian Syndrome, which often leads to infertility. Aside from my infertility issues, my husband was also told that he had a slim chance of being able to have kids. Despite the odds, my doctors discovered that I was pregnant. In fact, my baby girl was already 7 weeks gestational age. At first, no one could believe it. The doctors even did a sonogram to see if it was a cyst because there was just no way I could be pregnant. I even took several pregnancy tests, all of which turned out negative! To everyone’s surprise, there was a little heartbeat. That moment changed everything.

However, at the 12-week checkup, the doctors found a blood clot in the uterus. They called it a Subchorionic Hemorrhage. I was put on bed rest and was monitored very closely. But, by 18 weeks, the clot was gone! I thought this was wonderful news. I could tell the sonographer was worried as she continued the anatomy scan. I knew she couldn’t say anything, but she didn’t have to. Her face said it all. The OB told us our little girl was 3 weeks behind on growth and had very little amniotic fluid. We were referred to a high-risk specialist. 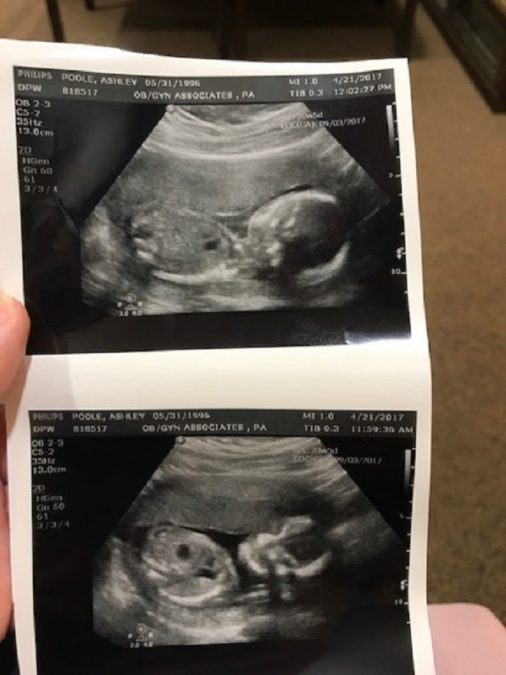 The first high-risk specialist I saw said there was less than a 20% chance of survival. I couldn’t believe my ears when he told me that I was young and so I should just try again. My heart fell to the floor. I wanted to scream and cry. I asked God, ‘Why would you bless us with this baby girl just to take her away?’ I admit that I grew angry, but that anger turned into determination. I wanted another opinion. Unfortunately, by this time there was less than 1 cm of amniotic fluid. My baby’s growth continued to fall further behind. All the second specialist told me were the signs of miscarriage and then he sent me on my way. He told me to come back in a few weeks, to check for a heartbeat. I was beside myself with grief and disbelief.

AI felt like giving up. I cried, screamed, and broke down. I remembered that when I am at my weakest, God’s strength is shining through. With every passing week, I had a little more hope. A little more faith. Even though things kept getting worse I knew couldn’t give up. God chose me to be her mother for a reason. Adalee continued to fall further and further behind in her growth. The amniotic fluid rose but always fell. I had appointments 3 times a week with the specialist to monitor the progress. Each appointment the specialist told me to prepare for the worst. At 26 weeks, I was informed by the specialist that the blood flow in the umbilical cord was compromised and that I would more than likely miscarry within the next 24 hours.

I can’t explain what happened, but at that moment I had a strength that was not my own. I knew it was time to fight. At this point in the pregnancy, my baby wasn’t even what they considered a viable weight. They told me I had a choice; they could do everything in their power to save her, or do nothing. My doctor encouraged me to let her go and tried to tell me that delivery would be too much stress on her frail body and that it wouldn’t be humane to put her through it. I didn’t have to think twice. I asked them to do everything they could to save my baby girl. Something in my gut told me to fight for her, so that’s what I continued to do.

I was admitted into the hospital and put on bed rest. The doctors were convinced I wouldn’t make it 72 hours without being forced to. Despite all odds, three days turned into a week, and one week turned into three. There were a lot of scares where her heart rate would fall below 50. Several times I was all prepped for a C-section, but Adalee always brought her heart rate back up. When we were approaching 4 weeks in the hospital and I was 29 weeks pregnant, Adalee finally measured 16 ounces. It might not seem like much, but to us, this was a big deal. The next day on the sonogram, Adalee was not moving at all and there was no measurable amniotic fluid. It was time. 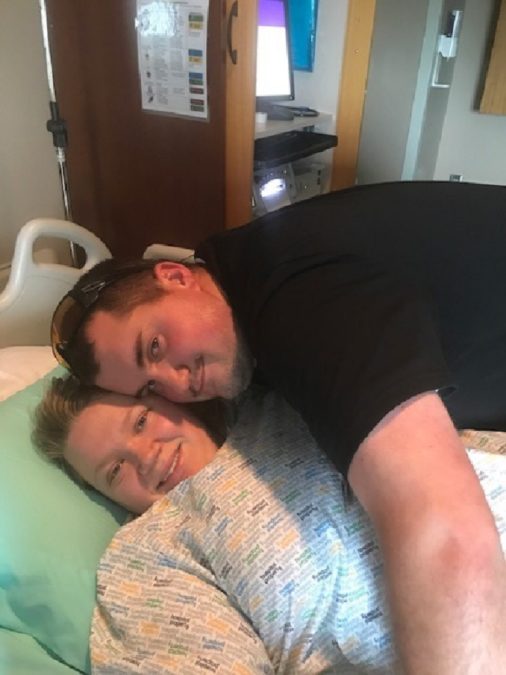 On June 22, 2017, at 29 weeks, 5 days gestational age, I gave birth to our daughter. She weighed even less than the original estimate – only 14.5 oz. When the team delivered her, they said anything under a pound wasn’t viable, but thankfully they followed my wishes and continued to work on her and did everything they could help my baby girl. The first time I saw her she had translucent skin and I could see every bone in her body along with the loops of her intestines. I couldn’t believe she was here fighting. I couldn’t believe a child the size of a can of Coke was living. No one else could believe it either. 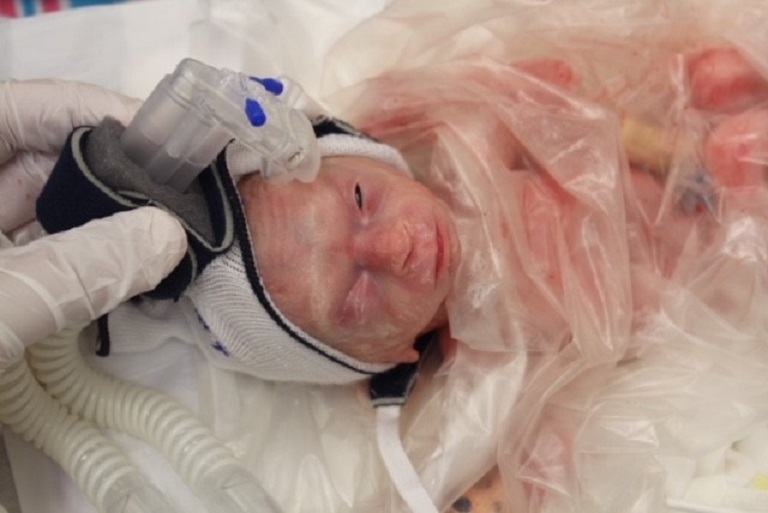 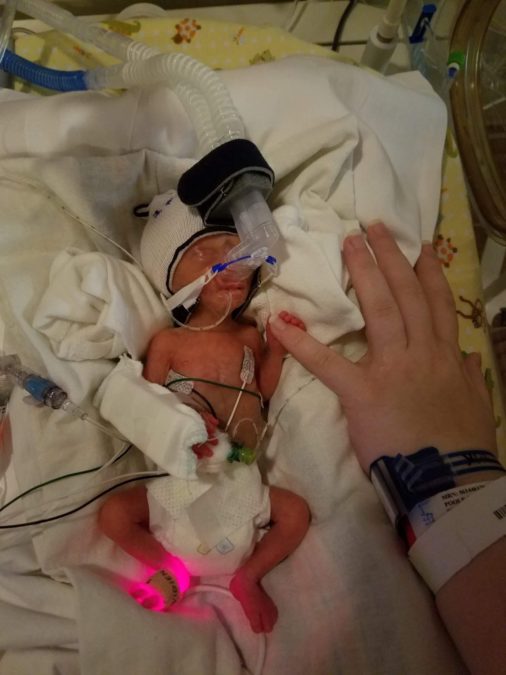 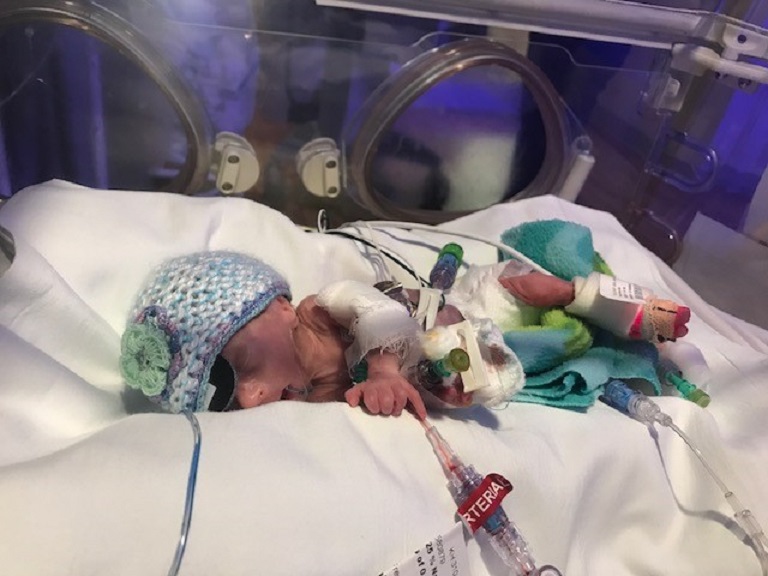 Adalee was transferred to Children’s Healthcare of Atlanta when she was 4 days old. It was by far the scariest day of my life. They placed a central line at the new hospital. Her little body couldn’t handle the sedation to place the line, so they had to intubate her. It broke me to see my daughter with so many tubes and wires attached to her. 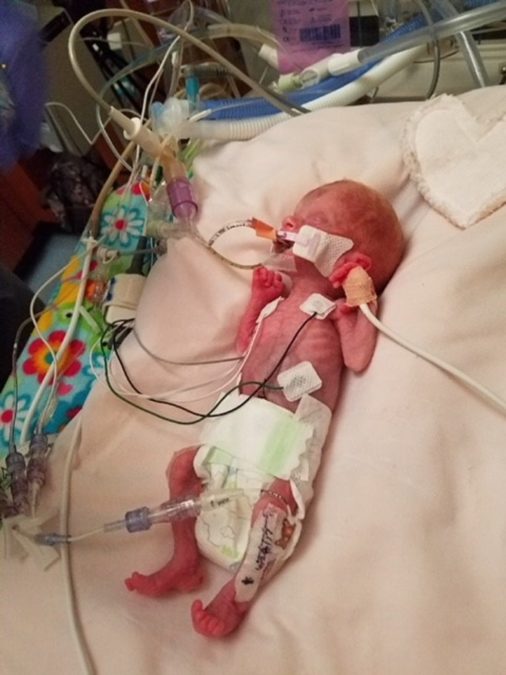 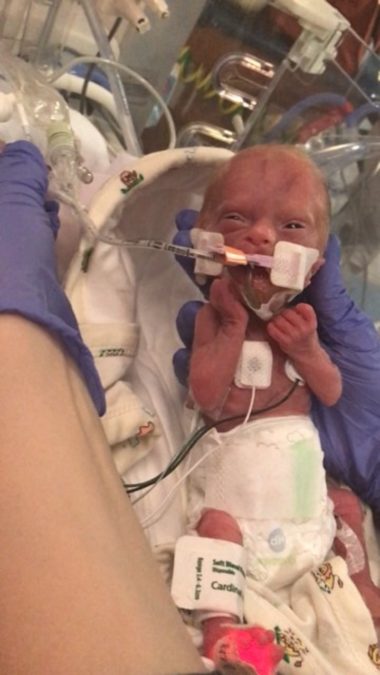 The days crawled slowly along in the NICU. She continued to gain weight, but it felt like an eternity before she even hit a pound. We couldn’t even hold her until she was 3 weeks old. Let me tell you, it was the best feeling in the world when we finally did. We knew there were many obstacles ahead. We were told our baby’s health would be a crazy roller coaster and we should always be prepared for the worst. Through many prayers and sleepless nights, however, we found the journey instead was more of one long uphill battle. We waited for a brain bleed diagnosis or her needing to have surgery on her bowels, but it never came. The doctors told us it was unheard of to see a baby born so small and not have any complications besides needing to grow. Our doctor called her a superstar. 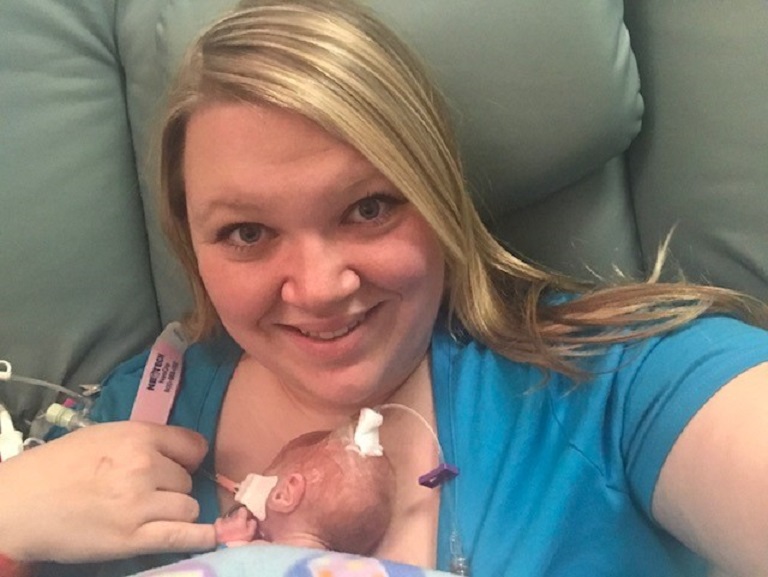 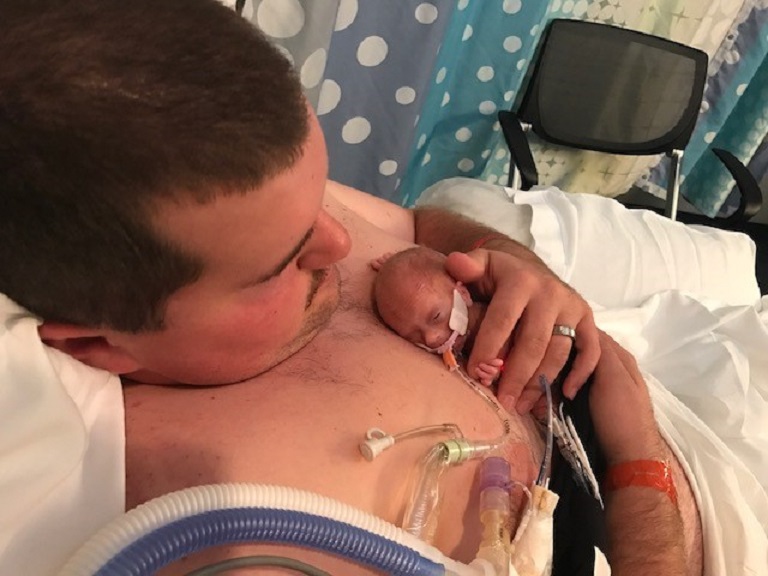 Eventually, she gained the weight she needed. At two pounds, our little girl was getting extubated. But, like the rest of the pregnancy, delivery, and first few weeks of life, this was no ordinary occurrence. Adalee was stubborn and had to do things her way. She decided to extubate herself. Her doctor didn’t want to extubate until she was at least 3 pounds, but Adalee had a different plan. She continued to grow and thrive. At 3 months old, Adalee had no more respiratory support!

Adalee was getting stronger every day but we still had to play the waiting game to finally take her home. She got her nutrition and milk from a feeding tube until she drank from a bottle for the first time at 3 months old. Her nurses constantly had to keep replacing it. Our girl was quite handsy and always pulled out her tubes and pulled off her heart monitor wires. 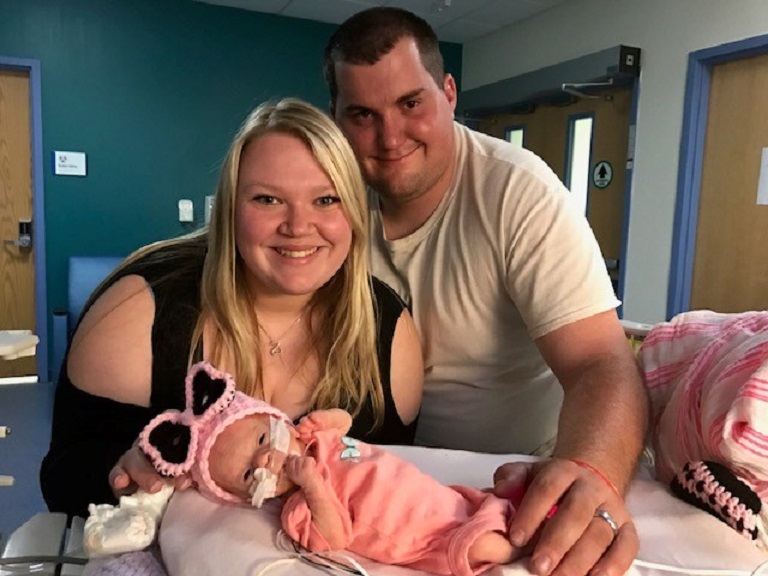 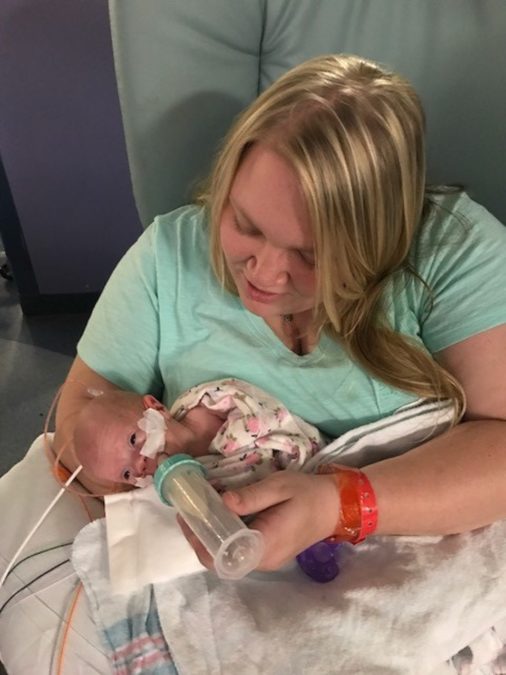 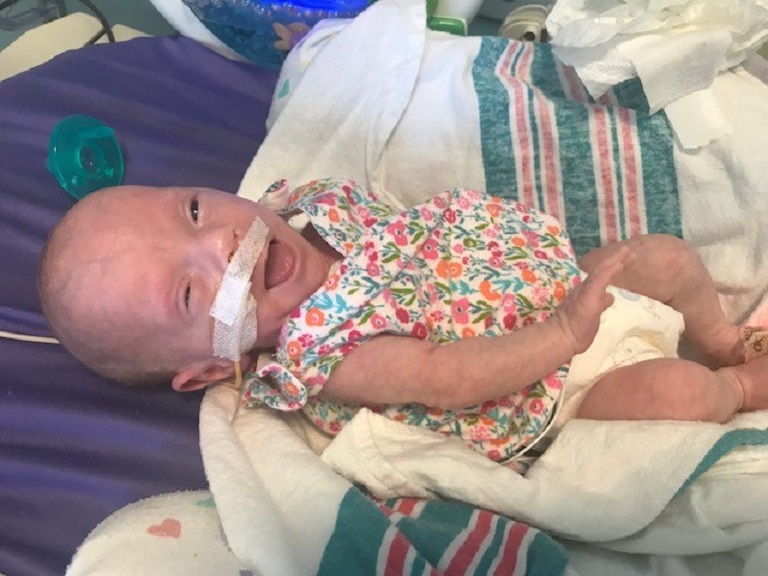 Finally, after 106 excruciating days in the NICU, we finally got to take our baby girl home. Adalee was 4 pounds 4 ounces at discharge. She was sent home on a feeding tube that was removed shortly after coming home. She continued to stay on her heart monitor because she was so small. As soon as she got home, our baby girl really started thriving. 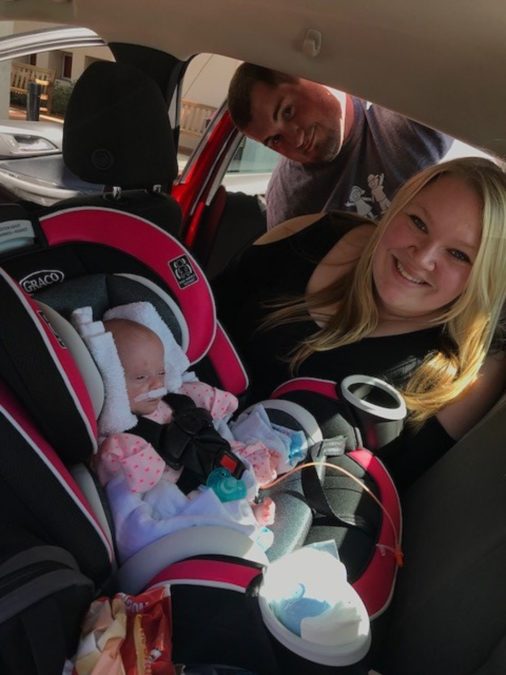 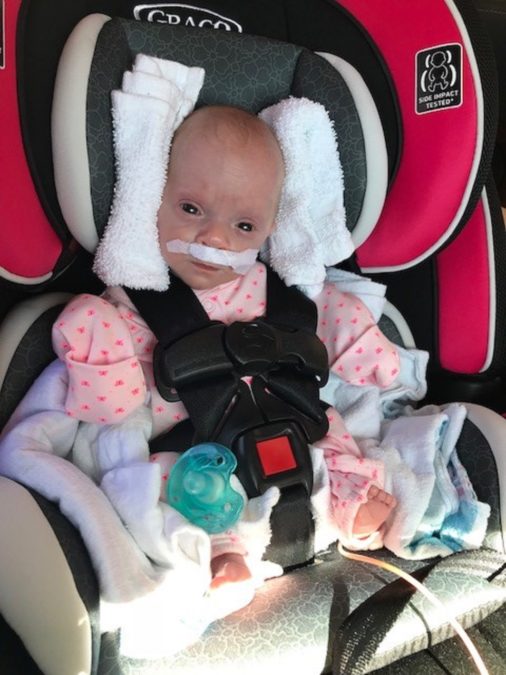 It has been 9 months since bringing Adalee home and I’m so happy to report that she is doing well. She is now a year old and weighs 12 pounds. Yes, she is still quite small, but she will get there. She is no longer on her apnea monitor and her ROP has almost resolved on its own, no surgery needed. Adalee has surpassed all expectations and overcome all the odds placed against her. All her doctors are very impressed with her progress. To say we were blessed with a miracle is an understatement. I can only hope for continued progress and growth for our little one as she continues to grow. Our 14.5 ounce baby girl, with less than a 20% chance of survival, lived. She made it. She survived. Though she may be little, she is fierce.

Adalee: ‘God is my refuge; noble one.’ 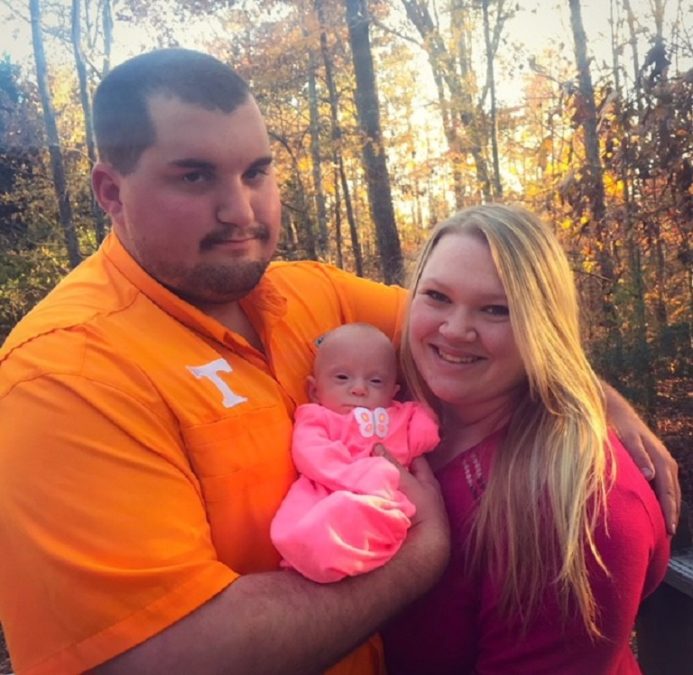 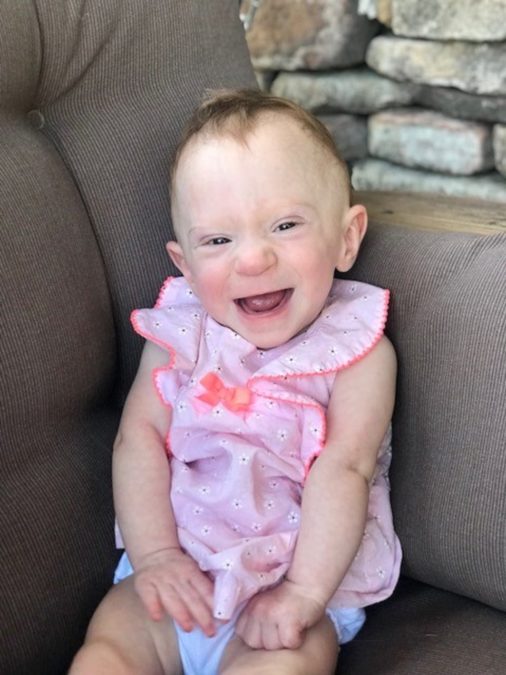